If you're walking into this review having just played the previous two DeathSpank titles, you probably already know what to expect out of the Downtroddener of Justice's latest adventure, The Baconing.  Truth be told, little has changed.  This isn't necessarily a bad thing, but familiarity and repetition only go so far.

With a new DeathSpank comes a new setting.  Fantasy and modern war parodies make way for yet another easily pastiched genre—science fiction—and this game nails it perfectly.  Everything is in here, from Robocop to Tron to even Hitchhiker's Guide to the Galaxy, and a ton more.  If you can name it within the sci-fi genre, there is probably a solid nod somewhere in The Baconing.

The game kicks off in a way that will be instantly familiar to fans—well-paced quests that sweep you from one location to another at a steady pace, a plentiful supply of enemies to hack and shoot your way through, and imitigable plethora of looted goods.  With an even bigger wealth of content to derive jokes from, the game hits you thick and fast, rarely letting up from its barrage of DeathSpank-iness.

This is probably The Baconing's greatest strength.  More than any of the others games in the series, the jokes are fast and relentless throughout the whole experience, and they rarely miss their mark.  Maybe it's because sci-fi is such a rich genre, one that many of us are already intimately familiar with.  Regardless, it very much works in the game's favor and makes for what is likely the funniest DeathSpank game yet.

Unfortunately, the laughs can only keep the game afloat for so long, and oftentimes they don't feel like enough.  The inventiveness of the humor doesn't extend into the gameplay half as well, with The Baconing never expanding beyond the confines of the first two entries.

There have been a few small additions to the core combat, such as the ability to reflect long-range attacks and push enemies away with your shield.  A new charge attack has also been implemented for all ranged weapons.

And while these new abilities help alleviate some of the monotony that was seen in the previous titles (where the strategies boiled down to hacking away at an enemy while chugging down health potions), it never feels like enough to truly deviate from that creeping feeling of tedium.  Funnily enough, the designers seem to be aware of this - some of the non-player characters you come across even joke about the repetitiveness of combat.

Quests are equally dull, with few of your outings ever veering away from glorified item fetching for a grand menagerie of in-game characters.  For a game that prides itself on its humor, leveling is extraordinarily uninventive as stat bonuses of your choosing being your only rewards.

If you're willing to push through these problems, The Baconing treats you to a wonderfully creative storybook world that feels unique in an industry drowning in copy-and-paste design ideas and too many "me, too" titles.  Overall vibrant aesthetics and offbeat humor make the game incredibly likable and undeniably fun, even without Ron Gilbert's influence this time around.  It seems such a shame that there's just so much hideously dull rock to dig through to get to that pristine diamond at the center. 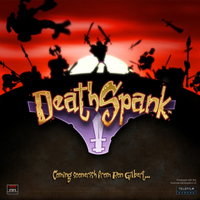