Record of Agarest War 2 is an odd game considering it blends in various elements that make up an RPG from multiple other games while maintaining the uniqueness Idea Factory brings. Typically, situations like these are a foreshadowing of a great cataclysmic mess, but somehow the game manages to hold it all together with great finesse and makes the entire experience enjoyable. The end result is a product that may initially scare the player but shock with surprise - in a good way.

The story immediately jumps in with the protagonist Weiss as he is about to kill a god. Due to some unusual  circumstances, Weiss suddenly loses his memory, and is told by a strange voluptuous female, Eva, that he must be the vessel for the destroyed god or the world will fall into ruin. In order to do so, he must travel the world and find demons. He then must slay to retrieve the god’s scattered power, as well as seek maidens that will bear his child to become the next vessel.

Due to these circumstances, you’ll be venturing through multiple generations with the protagonist switching from Weiss to his offspring and then the offspring after that. It’s a staple for the series, and the three generations that you experience are a perfect balance compared the five from the original Agarest War and the two from its direct predecessor, Agarest War Zero, were either too long or too short. It’s also for this very reason that the entire cast of Agarest War 2 is much more cohesive and interesting collective as a result. You spend enough time with them to care about the plight of Victoria as well as build bromance relationships with Jainus.

In addition to the immediate story there is a highly detailed background with a deep lore that can immediately draw in narrative nerds and addicts. Even if you’re not a fan of the premise, the world and the setting of Agarest War 2 is very interesting, perhaps a testament of the series lasting thus far.

All of the storytelling is wrapped up in a style traditional to Idea Factory. Acting like a visual novel, the character portraits appear on the screen as they talk essentially creating static-oriented conversations. There aren’t any expansive cutscenes that portray movie-like qualities, but it doesn’t deter the effect of the plot too much.

To make it a bit more engaging, the characters have certain features such as the bobbing/nodding of heads, hair fluttering, and the occasionally annoying breast jiggling. At certain points in the game you will need to make choices that will directly affect the happiness level of your party. Say something dumb and a few of members of your party might feel bad; speak all the right things, and you could make them happy.

Sadly, all of this doesn’t amount to much as the overall story is fairly weak. Characters for the most part aren’t very strong and memorable despite the significant amount of time you spend with them. Couple this with the repetitive nature of the plot such as saving people and killing demons, and you have what amounts to a highly uninspired narrative. It’s a tad disappointing when you consider that the mythos of the world is rich with content. The writing of the conversations aren’t notable either as characters throw out hammy lines, deliver the same obvious comments over and over again, and the always-cliche sexual innuendos.

Luckily, the gameplay itself is fairly solid with the combat and various customizing options available straight from the get-go. Using a turn-based formation system, the battles feel entirely revamped in many ways. You may have up to four party members at a time on the field for your use, but how you engage fights with the characters individually or as a group can decide victory or defeat. By designating one character as the party leader, everyone will take a formation. At this point you can use any amount of characters you want to attack a single enemy. If you fight using only one character you are able to attack using the four face buttons, which will consume their respective amount of AP that serves as your action pool. If you use multiple characters, you can combine the AP of each individual party member and attack for a longer duration. Consequently, by doing so, a bar called the Wait Meter increases. The more it fills ,the longer it will take for the characters to be battle-ready.

The combat gets even more intricate as characters that aren’t in formation can’t participate in group attacks and may also be left out of formation bonuses and buffs. The most interesting part is that your enemies can essentially utilize the same mechanics at their disposal which can create deadly attacks for finishing off one of your characters. As a result, making use of the various systems and points that allow for special moves is essential in each fight. The fights are challenging, and even the grunts can give you a run for their money with their devastating group attacks.

Fortunately you are not left completely helpless as each battle will reward you with experience to level and party points that you can use to increase the stats of your characters. Focusing on certain stats will greatly benefit you and is recommended over distributing them evenly to build a rounded out character. It’s all about having characters that specialize in order to deck them out with great power. In addition to stat growth, you can also forge new weapons by crafting them using materials or by breaking down existing equipment to make new ones. It’s heavily customizable and works great in tandem with the overall progression of the game as it doesn’t really require you to heavily farm, but rather play smart.

The greatest customization tool is the ability to learn new attacks and assign several of them to each of the face buttons. There are two major types of skills: single and combination. By meeting requirements with another character, you can pull of destructive combo attacks. If you choose not to then you can simply stick with single attacks. Each button will use the corresponding move and, depending on how many moves you have assigned to each button, you could unleash a rotation of diverse moves. An example would to be to have one button that can hold attacks that deal dark, holy, and fire damage. It’s an interesting system that can be as complicated as you want it to be and tailor it to your own personal style. The depth is fairly endless especially considering there are myriads of moves to learn.

If there are any complaints about the combat it’s the erratic difficulty that you can come across throughout the entire playthrough of the game. The beginning is fairly simple with boss fights being nothing than mere flies while driving by. However, once the difficulty spikes up, it quickly forces you to utilize all of the game’s intricately crafted systems. When the game hasn’t taught you how to make use of it and suddenly expects you to know everything, it’s a pretty jarring experience. Even so, when you do overcome these challenges it’s a very rewarding feeling much akin to Dark Souls.

Unlike its predecessors, Agarest War 2 has an open map to travel on rather than a simple point-and-click design. It sure gives the illusion of freedom as you can even scroll your camera left and right, but it doesn’t really contribute anything large in the grander scheme of things since your route is fairly linear throughout the entirety of the game.

The anime style isn’t a departure for the series as it still emphasizes heavily on the cool-looking spiky-haired protagonist and ensemble. The portraits are well drawn with great detail and it’s somewhat charming until you get sick of the static drawings. If the game isn’t using these images it opts to use the battle sprites which are chibi in nature. Having very basic movements with a somewhat gritty and faded coloring style, it’s akin to the old-school JRPG experience. It isn’t bad per se but it’s both stylistically and visually dated to say the least.

The major problem of the visuals is that it varies between 2D sprites and 3D models of monsters and other features. The end result is a system that buckles under its own weight and causes many technical problems. Issues such as long loading times, freezing, or massive slowdowns definitely create some frustrating situations especially considering what would otherwise be a quick 10 second fight can easily take up to a minute. These problems don’t arise often but when they do, it’s a major nuisance.

The language track is exclusively in Japanese, so those nutty about English dubs will cringe at the native audio. Even so, for the most part, the voices are bearable and if you really can’t stand it then you can just spam the X button and skip the audio. The music itself is fairly good if it wasn’t for the fact that the same two songs aren’t playing over and over again. Beating it to death, you will get the same melancholy tune when you’re in dialogue and the fast paced battle song in battle. It’s an absolute hindrance to the game since the audio could’ve been so much more. Why they chose not to diversify is beyond me.

Record of Agarest War 2 is a surprisingly good game. It has its fair share of problems that hold it back and perhaps the alienating fanservice nature of the game may work to its detriment. However, beneath all of that is a gem that is worthy of your time. The question then beckons: Are you willing to tolerate all of that in order to enjoy it?
Advertisement. Keep scrolling for more 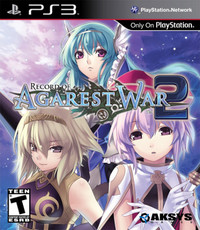