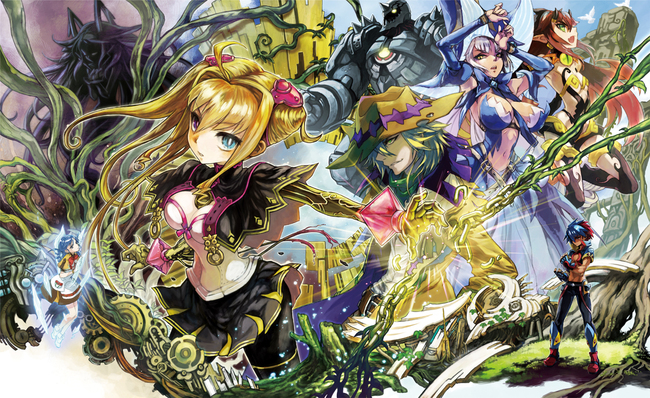 As a big fan of the Ys series of games, I was already approaching Legasista with a solid amount of appeal for the genre that focuses far more on battle strategy and kinetic action. Nippon Ichi Software hasn't had much of a presence on consoles in the current generation, instead going the risk-averse route by putting a lot of effort into handheld systems. Trying to ride off the success of Cladun (which I highly recommend playing for you PSP owners out there), the company is attempting to test the waters by releasing Legasista exclusively for the PSN. Based on my experience with the game, I can only hope more JRPG publishers find their outlet on these digital platforms.

The story is a rather simple one. Our main hero is Alto Straitor, an assiduous male who is trying to found out how to make his sister Mali human agin after being turned into a crystal due to a curse from an ancient relic. After years of exploring other dungeons and picking up the different rumors he heard along the way, he arrives at a place called the "Railyard" that contains technology thought to have been destroyed long ago. Overseen by a mysterious android known as Ms. Dungeon, the manager of the grounds, it is inside the Ivory Tower found in this place where he hopes to find an ancient weapon said to have the ability to cure his cursed sister.

However, after discovering this "weapon" that comes unexpectedly in the form of a young human girl named Melize, she promises to grant him his wish by taking his life in return. But as she is about to kill Alto, she suddenly begins to malfunction and as a result wipe out the data that contains most of her functions. In order to save his sister, Alto decides to help Melize recover various data files scattered around different dungeons that can help restore Melize back to her original form. 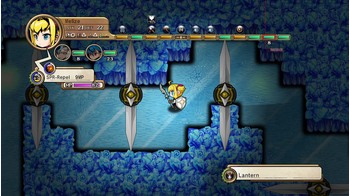 Each dungeon is riddled with traps and puzzles to keep the experience frantic and exciting.
Something that I can give the game a lot of credit for was that at no point did I feel that the sheer challenge ever strip away the enjoyment I had while playing Legasista. There was this real nice balance I felt where nothing couldn't be solved by my own wit and tenacity. For example, towards the end of the game, you can imagine that the difficulty becomes far more drastic. However, even though I died time and time again, it didn't take long before I started to understand the places where I could improve my skill without having to go back to earlier dungeons and level up.

Whether that meant coming up with a way to sidestep an enemy's attack pattern or figuring out how best to lure them into a corner to finish them off quickly, everything could be solved with a thought-out strategy. It all amounts to a mathematical equation, metaphorically speaking. I knew what I had to do; now I just had to figure out how to get there. Once I learned how to deal with a problem, I was able to move on unabated. It was sort of like the feeling I got playing a game like Dark Souls - there is certainly that sense of relief and and definitely accomplishment.

As you can imagine from a game of this genre, Legasista has an overwhelming amount of depth to it. Not only do you have a cast of storyline characters to assemble into a team, but you can even build your own using image files stored on a flash drive. Want to create a group with all of your friends' faces on them? You can! Want to build a dream team of your favorite video game or anime characters? It can be done! There's a near-infinite amount of possibilities to be had here and is a great addition. You can even export your creation and share them with others. 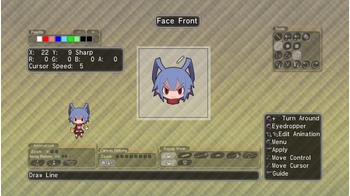 The robust Character Creation tool is a great feature.
Each party member also has a variety of jobs to choose from each with their own inherited strengths and weaknesses. Now, the only way to change jobs again is by leveling the current one to 20, but the great thing is that you get to keep the progress you had already made on others. This serves as a fantastic upgrade by giving players a method of boosting their benefits that can make a person stronger, faster, and overall more apt than they already are.

These can be augmented through the use of Frames that are unlocked by leveling up. This feature can radically alter the way they play. Taking too much damage from a monster? Switch over to a defensive Frame that focuses on boosting your defense and speed to keep yourself nimble.

Of course, there are also restrictions inherent to them: you may be able to beef up your magical ability, but your melee damage will curtail as a result. This was really handy when I had spent the entire on only one job and didn't want to go back to level up a different one just for a few important stats, and became really important near the endgame where having a strong weapon didn't mean much when I couldn't get close to what I was trying to hit.

With enough work, you could make your team practically invincible. In true Nippon Ichi fashion, you can even level up your character to 999. This may sound daunting to those not familiar with their line of games. Thankfully, Legasista features Ran-Geons, which is basically a twist on the "Item World" dungeons featured in Disgaea. These are multi-floored, randomly-generated areas where the loot rarity and monster levels change based on the gate you unlock. There can be hundreds of levels to delve into, though thankfully there is always am esca[e gate that will let you leave early if the going gets a little too rough and allows you to keep the experience points and items you earned.

And just like the Item World, these can vary drastically. At one point, I was collecting a large amount of incredible items surrounded by weak enemies, and another I was hard-pressed to find anything while dealing with monsters dozens of levels above my own. It can all turn on a dime, and based on your perspective, can be far more exciting than the main story itself. 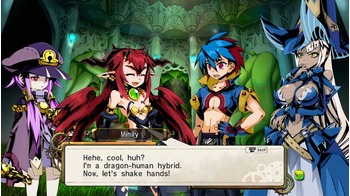 I found the character designs in Legasista to be very appealing.
There's also a massive amount of loot to grab whether from monsters or from treasure chests, which are all color-coded and have their own "titles" that affect the attributes of their contents. More of these "titles" can be gathered by breaking down weapons and armor and applied to other equipment through a separate menu. It offers the game plenty of replayability in that regard.

If I can knock any part of the game, it would have to be that parts of its presentation are lackluster, to say the least. This game certainly has the look and feel of a budget title, and doesn't take much advantage of the PS3 hardware other than the high resolution visuals and larger amount of memory available compared to a handheld.

The story is also sometimes hit and miss. Scenes transition a little too abruptly and leave me grasping for any sort of real coherency. I think if it wasn't for the interesting character designs and solid voice work, I probably wouldn't have enjoyed the story quite as much. But there are certainly a fair share of entertaining moments, such as a bean sprout attempting to seduce Alto, or the emotional scenes that explored Melize's existence, that kept me at times absorbed.

Legasista offers an overwhelming amount of depth and enjoyment that wraps itself around a story neatly designed with a large number randomly-generated dungeons to investigate and a treasure trove of items to discover. Every time I picked up the controller, I quickly lost track of time as I became fully enveloped in the highly-addictive world and what it has to offer. Of course, it certainly isn't a game that will satisfy everyone, and the story may turn many off from the experience altogether. Also, those who aren't into grinding a countless number of hours for levels and loot need not apply.

For me personally, I had a great time. With its brilliant game mechanics, beautiful art design, massive degree of customization, and endless amounts of repayability, Legasista is an easy game to recommend to those looking to scratch their hardcore RPG itch, and one that will always have something new to explore.

Legasista Coming to PSN this August

Beware of traps in this Legasista trailer 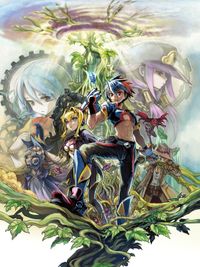