The Mario franchise has its fair share of RPG spinoffs, some of which belong to their own sub-series. One of those sub-series, Paper Mario, has had an interesting presence over the last decade.

As with Super Paper Mario before it, Paper Mario: Sticker Star sacrifices its traditional roots in favor of innovation. Does this shift pay off?

As common of games in the series, the premise is simple. The annual Sticker Festival gets interrupted by Bowser, who in addition to kidnapping Princess Peach like he always does steals the wish-granting Sticker Comet, which then proceeds to shatter and get scattered around the world. Joined by the snarky sticker fairy, Kersti, Mario must obtain all the pieces of the Sticker Comet and rescue Princess Peach.

As mentioned before, this is not a traditional RPG. There are no party members, no leveling, and not even a standard menu consisting of the usual "attack, magic, item, etc". Instead, every little thing revolves around stickers, both in battle and out.

To do any action in battle, the player must choose from a selection of stickers obtained on the field or through shops.  There are several types of stickers. Some are standard attacks like jumping or using a hammer. There are also healing stickers, status effect-causing stickers, even support type stickers.  In a way, this method of taking part in battle is reminiscent of the Baten Kaitos series, which is also reliant on technical "items" to attack rather than a simple "always there" attack button.

As with previous games in the Mario RPG series, there is a level of interactivity to the battles that goes beyond menu selection. With proper timing, a simple button press could extend a combo or guard yourself against an enemy attack, lowering the damage dealt. Nearly every sticker has this function, some using a sparkle as a kind of button prompt.

While unique, the battle system is pretty hit or miss, marred further by obscure design choices like the inability to target enemies.

The field is separated into areas by a stage selection-based overworld. The stages are mostly linear, yet still encourage a bit of exploration. The game utilizes on-screen encounters, so enemies will be walking around each map. Jumping on them or attacking them with the hammer outside of battle will carry over to the battle itself, dealing some damage. The enemies do not respawn while Mario is in the stage, making it easy to figure out if you've been somewhere before.

As with Super Paper Mario, there's an interesting way of interacting with the environment that plays with the perspective. This time, we're treated with a function known as 'Paperize' - where Mario is essentially removed from his 2D world of paper to alter the area in his line of view. Sometimes sticker outlines will appear. Placing stickers in those outlines can either cause a new '?' block to appear which now holds an upgraded version of said sticker, or it can change things in a way required to advance. For example, there may be an outline in the middle of a mound of snow - and placing a fire flower sticker would cause the snow to melt and reveal a new path.
Advertisement. Keep scrolling for more

The other function of Paperize is to take pieces of the environment that are "peeling" and then replace or move them. Maybe a door is upside down and needs to be flipped, or maybe two pipes are in the wrong position and need to be swapped. There will be many instances where the function is required. Unfortunately, this isn't always clear, forcing the player to Paperize at random or when nothing else appears an option in hopes of finding something to peel.

Paperization is tied to other items known as "Things". Things are 3D objects that must be turned into stickers before they can function. Once they are, they can be used either in battle as powerful special attacks, or on the field while paperizing. Bunch of bowling pins in your way? Paperize and use your new shiny bowling ball sticker. Light bulb burned out? Change it with a light bulb sticker. Things are quite versatile and cleverly implemented.

Unfortunately, missing a single important 'Thing' could have you going on an expedition around the world not even knowing what to search for. To make matters worse, the stickers used in Paperization mode disappear even when they aren't the right ones, so you can potentially waste a lot of rare and valuable stickers that could have been put to better use in battle.
Sometimes there is only a single solution, a few of which are pretty obscure. This can lead to some leaps of logic from the player when faced with the challenge again, which rarely produces the desired result.

As there are no experience points, the main purpose of battling comes down to coins. The idea is of course to use them to buy more stickers, considering it happens to be the only way of taking part in battle. However, stickers are scattered throughout most stages, and even attacking everything in sight will still leave you with a surplus of stickers as well as coins.

On the plus side, this makes it easy to ignore enemies if the player chooses to do so. Very rarely if ever will you have to grind for coins, meaning a boss can be reached without entering a single encounter.

The soundtrack has that upbeat Mario touch, rearranging some classic themes while adding in new ones. While not on the same level as some of Koji Kondo's work, that's a high bar and the sound team did a fine job.  There are definitely memorable stand out tracks like some of the boss themes.

The distinct papercraft graphics make a strong return, arguably making the game the most beautiful in the series. The 3D effect is taken full advantage of, sometimes displaying a perfect contrast between the 2D character models and the 3D environments. This is most apparent when Paperizing, a feature that was likely inspired by the hardware in the first place.

While it may not have been the true successor to The Thousand Year Door like many fans hoped, Paper Mario: Sticker Star is a fine addition to the RPG spin-off series. Despite some disappointing design choices and a mechanical far cry from past entries, those that can keep an open mind will find a charming adventure with snappy writing and interesting innovations that can't be found anywhere else. 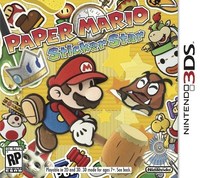