The Might & Magic franchise has been around for quite some time.  The first title in the series was released on computers in 1986, and since then, the series had been steadily releasing dungeon crawlers onto the PC world until 2002.  Sadly, the main franchise appeared to die after the release of Might and Magic IX, when the original developers filed for bankruptcy.  However, Ubisoft has recently revived the series with Might & Magic X: Legacy, a decidedly old-school dungeon crawler set in a fantasy world on the brink of war.  Will the Might & Magic series make a triumphant return to form with Legacy, or is what made the series so influential lost? 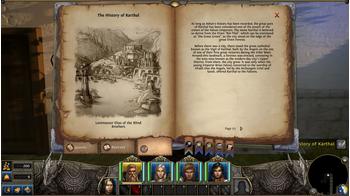 Books are scattered around the world of Ashan, and provide interesting backstory should you flip through them
Legacy does have a plot to it, involving a threat from the past and tensions between the colonies and the main empire in power, but the overall story isn’t really elaborated on all that much. Instead, the focus is on four adventurers and their travels through the Agyn Peninsula.  You can make your adventurers as you wish, choosing from four different races and one of three classes within each race.  It's imperative to create a party that balances and compliments itself well, as when the adventure starts you are stuck with your choices. Should the party composition seem too difficult to handle, or if you are new to the Might & Magic series, there is a balanced pre-made party to choose, but even then you have to build your characters while they level, and improperly assigning skill points or neglecting skills can leave  you at a disadvantage against the dangerous enemies on the field.

Besides the pre-made party, and a few tutorials, Legacy offers no handholding, leaving the player to their own devices.  There are quests to complete and dungeons to explore, but you aren’t given directions of where to go and what to do; you decide where to go in the grid-based environment yourself.  Except for a couple instances early on, you also aren't barred from any particular area.  Legacy’s open world nature lets you go anywhere at anytime, and decide from there whether you’re able to handle the creatures there or not.  This can be frustrating for some, as it’s all to easy to stumble into a dungeon with a monster that makes quick work of your party, but also gives exploration a satisfying air of danger and risk-taking that often is absent from many modern games. 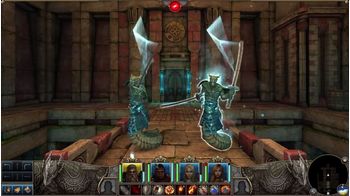 Not being careful in battles can quickly lead to death.
In Legacy, any battle can be deadly, and dungeons require strategy and forethought to survive.  Enemies often attack in groups and can flank you, and maintaining an offensive strategy while keeping everyone alive is a juggling act of turn orders, proper skill usage, and potion quaffing. It’s a small mercy that enemies do not respawn on the field after defeating them, but that also means that you cannot grind your way to victory; proper tactics are the only way to progress in this dungeon crawler.  This all comes to a head during boss battles, as the bosses tend to use devastating tactics that you must quickly learn to deal with.  While these battles can be very difficult, emerging victorious nets you substantial experience and great loot, making the rewards of the hard-earned victory well worth the effort.

There are also puzzles in Legacy, but for the most part they aren’t too difficult; hints to the solutions are almost always available in the room you find the puzzles in.  There are also hidden passages to find, pressure plates to step on, and levers to pull, but these are normally very pronounced, and those that aren’t are typically mentioned by one of your party members.  Legacy’s focus is more on the ‘puzzle’ of defeating strong enemies than it is on complex dungeon head-scratchers. 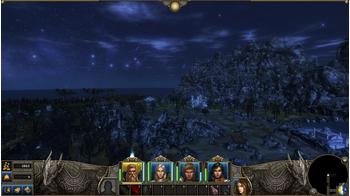 The Agyn Pennisula looks very pretty... provided your computer can handle it.
Might & Magic X’s total adherence to an old-school design doesn’t always make for the best experience, however. Finding and completing quests can be a chore, as you’ll never know where to go or who to talk to unless you talk to every NPC in each area.  Also, since enemies do not respawn, it’s a shame that there isn’t an option to auto-walk back to the nearest town from the field… the simple feature would save players from the tedium of walking back through the large world step by step, but is unfortunately absent.

Also, despite how nice looking Legacy’s world is, the game suffers from optimization issues that mar the otherwise pleasant graphics.  Frame rate and pop-in issues are abound even on higher-end computers, and many times the game has trouble running when it doesn’t seem like it should.  There is also the inexplicable requirement to log onto uPlay whenever you boot the game up, which feels like an unnecessary complication considering most players will likely buy the title on Steam or another distribution service.  Finally, there have been rare reports of save corruption issues, but it is not something that should deter you from picking up the title.

Might & Magic X: Legacy’s homage to older games of the iconic series is sure to please fans of old-school dungeon crawlers, but others may be put off by its open-world style and rough difficulty.  Legacy has plenty to offer those that dig into the world, but only yields rewards to those that fight tooth and nail through each and every battle.  While the game does provide some small mercy in the option of choosing a pre-made, balanced party, but beyond that the player is left on their own, and the lack of direction can steer gamers away.  All in all, though, this game is both a homage to previous Might & Magic games and a faithful continuation of it... and that means it comes with all the ups and downs the franchise is known for.