The market certainly has been flooded with dungeon crawlers lately.  This is a utopia for fans of the genre, as dungeon crawlers have been widely neglected until recently, but it can be a bit hard to navigate all of these new releases if you aren't immersed in the genre.

Mind=Zero is one of those dungeon crawlers out to grab your attention, hot on the heels of other Vita entries Demon Gaze and Conception II.  Its setting and characters immediately will remind fans of Persona 3 and 4, and looks to please fans of the series with its dark atmosphere and storyline.  It's a smart move--Persona 5 is still a ways off, and the original version of Persona 4 released in 2009--but does Mind=Zero provide compelling narrative and gameplay to stand on its own two feet? 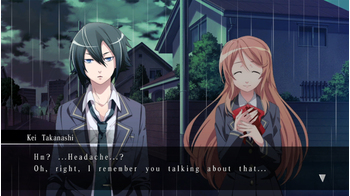 Mind=Zero has a pretty rock solid translation.
Mind=Zero starts innocently enough, with protagonist Kei and his friend Shizuru walking home from school.  Things quickly turn to the dark, however, as Shizuru "sees" a child's death.  One thing leads to another, and eventually Kei gains the power of a MIND:  A being from the Inner Realm (a parallel, connected dimension) that gives the wielder incredible powers.  Eventually Kei and his classmates get wrapped up in a world of violent MINDs and mysteries that only they can solve by venturing into the Inner Realm.

Mind=Zero is a bit light on the overall story, with long exploration segments broken up with only short story revelations.  This isn't particularly a bad thing for those looking to delve more into the title's gameplay, but the overall slow and drip-feed nature of the plot may frustrate those that want more of a glimpse into the setting Mind=Zero has on offer.

There is a bit beyond the main story, however; you can partake in side quests and small scenes that shed some light on the characters of your investigation team.  These bits can sometimes be interesting, but they mostly fall into the pitfall of repeating the same traits about the characters that we already know.  The side quests and conversations don't expound on the characters' personalities, and rarely provide any interesting tidbits into their backstories; they merely highlight the one-dimensional nature of Kei and his classmates.  These scenes rarely have a gameplay or item reward for watching these scenes either, making them feel like a waste of time. 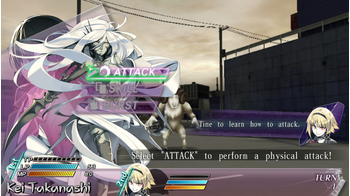 The character and MIND art are nice, but the rest... not so much.
With an overall unfavorable plot, Mind=Zero must instead rely on its dungeon crawling gameplay to garner favor.  You'll be sending your mostly young, plucky party members into a variety of large dungeons, with varying themes that are a twisted view of familiar scenery we all know.  Dungeon layouts tend to be large and maze-like, but there's little real reward for exploring; most paths lead only to dead-ends, and most of the treasure you find has only minimal use.  Add in the fact that floors can have two exits that lead to different areas, and it can be downright overwhelming.

As you explore these dangerous areas, you'll have to fight violent MINDs.  When you are in battle, you can choose to either have your MIND out, which can use special abilities and take hits, or fight with the characters themselves, who can use items.  Generally it's a rule of thumb to use MINDs, as characters take heavy damage when they're hit, but there are a few catches to it.  When a MIND is out, they use MIND Points (MP) every turn.  In addition, if they are attacked, they will also lose MP.  If a MIND loses its MP before the player withdraws it, the character will go under a 'Mind Break': A severe penalty in which the character in unable to act for a turn, and unable to summon his or her mind for another two turns afterwards.  This makes it imperative to learn when to summon your MIND and when to withdraw it.

The unique element of MINDs adds a nice, strategic layer to the affair, and one that is particularly rewarding in boss battles.  Unfortunately, what is engaging and rewarding in boss battles tends to be slow and tedious in normal fights.  At best, you can turn on Auto Battle and hold down the R button to speed up the animations; at worst (typically, at the beginning of each dungeon), you'll have to strategize during each battle, or risk the possibility of dying.  At least you can save at any time, so if you decide to go the reckless route, it's unlikely you'll be losing much if you hit the Game Over screen. 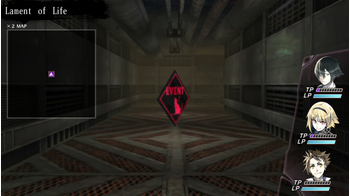 Regardless of the inspiration, most of Mind=Zero's dungeons are very... grey.
Finally, skills are interchangeable between characters via skill cards; the skill cards themselves are relatively common drops from enemies.  There are a variety of skills available, from physical specials to elemental skills to stat-boosting and healing spells.  While skills can be moved around at will, it's not always recommended; characters themselves have different stat gains, so fitting them into specific roles is ideal.  Finally, after a certain point in the game, you can level up cards to make them more powerful, and even combine them with other items to upgrade the cards to more powerful versions.  Skill cards make it easy to prepare for any situation that is thrown at you; on the flip side, though, it gets rid of the satisfaction many dungeon crawlers have, and that's finding the synergy between your party members and working within the confines of what you have.  To some that may be a small loss, but to others that may be a deal-breaker.

It is difficult to recommend Mind=Zero to anyone other than the most hardcore fans of the genre.  There is little motivation to push through the mediocre plot and the plodding battles, and at the end the player is rewarded with a cliff-hanger ending that will likely never be resolved.  There can be some enjoyment for those really looking for something Persona-esque without playing the game themselves, or those that despise fan service in their dungeon crawlers with a passion, but for everyone else, there are far more satisfying games to fill your time with. 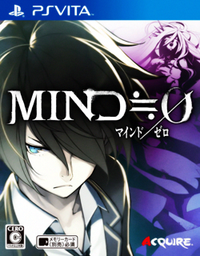