Lords of the Fallen Review

Serving as a bit of an enigma, I have already expressed on a couple occasions that Lords of the Fallen has quickly exceeded my expectations from what I was originally anticipating. Not to sound cynical, but when we're talking about developers that hadn't really made any sort of mark on the RPG genre outside of being led by Executive Producer Tomasz Gop who served as Senior Producer for The Witcher 2, one of my favorite games in the past decade, it was easy to feel that way.

Now that the game is finally out in the wild and I have had a chance to spend a lot of time with it, I am happy to report that the game has at least delivered on what it set out to do.

Lords of the Fallen relies on the mysteries of the unknown to pads its storytelling on to the player. By having to rely on cryptic audio notes that are scattered around the different areas and the passing conversation with the scant number of people our protagonist meets along his travels, we start to piece together the lore that the developers have gone to great lengths to establish.

Harkyn is a no-nonsense kind of guy, and fits the role he is given.
What we do know is that our “hero”, Harkyn, is a convicted criminal who has been branded with runes across his face that mark the sins that he has committed.

A gate from a different dimension has opened up, and a long-forgotten demon horde called the Rhogar has begun crawling through it to the human realm as they are known to do. Released from his imprisonment, he is tasked to hunt down the source of this awakening and ultimately seek the forgiveness of his sins.

While it can sometimes be difficult to get a good idea about who the players are in the plot or the direction things are going, there is thankfully the option to read up and listen to again the many aspects of the plot through the in-game menu.

Obviously, not everything makes sense immediately when one picks up one of those aforementioned audio logs, especially when they refer to story beats I had heard a while ago, but that is clearly by design here, and it's what ultimately did a pretty decent job in keeping me as a player interested in learning more.

It may not be that compelling of a story, and I can never really say I had much of an emotional attachment to what was going mostly because of the piecemeal design, but I was interested in learning more about the world as I uncovered its tale.

Some story elements feel rather disjointed as if the writers had originally woven a much bigger narrative that had to be cut down to save on time. The voice acting left a lot to be desired as well, coming across as flat in many respects, as if the performers were simply reading from a script instead of considering context. It wasn’t bad, but it didn’t feel like the game really delivered all that well with the plot.

This is a game dripping with atmosphere.
Not satisfied with being tied to technology that has been built for a more specific purpose, the developers decided to create their own proprietary engine that was created from the ground-up to do anything they could ever want it to do, allowing them to make changes on the fly when appropriate (I personally appreciated that all I had to see were the logos of the publisher and the developer while the game starts up before getting right into the main menu).
Advertisement. Keep scrolling for more

What we end up with is an incredible-looking game with visuals that rival that of Unreal Engine 4 by comparison. Everything from the particle effects to the lighting to the look of the weathered environments all come across in a very impressive fashion.

There was certainly a lot of effort put into the art design as well with the intricately-designed look to many weapons and armor found during the game, making the player look intimidating even in the face of the nasty-looking Rhogar.

The game has had its fair share of trouble when it comes to quality issues, however. Two of my saved games were suddenly cut short thanks to game-breaking glitches that resulted in an infinite death right after a checkpoint or a cutscene that just wouldn't trigger no matter what I did.

Of course, the developers have been attentive towards these issues and have released a patch at least on the Steam version, so there should hopefully be a fix sometime in the near future as a quick Google search shows that other players have encountered the same problems. I was playing on the PlayStation 4 version of the game which appears to have gotten the worst of it as this doesn’t seem to be as widespread on the PC.

The game begins by letting you choose among three main types either a Brawler (strong), a Rogue (fast), or a Cleric (a tank), along with a magic focus. While building Harkyn’s stats, it never felt like I was being pigeonholed into one specific character class.

Players are free to put points into any stats they so desire, and are only limited to the magic that they have access to, which can produce some interesting hybrid builds. I had ultimately created a build that made me out to be a walking fortress whose health regenerated fairly quickly while enemies were trying their damndest to whittle away my generous life bar.

There is a healthy variety of equipment to grab, of which many can be modified.
Even if I did happen to screw up, there is thankfully a way to re-spec your character stats and switch classes very early in the game by finding the right items and using them on a particular statue. The only downside is that you can only do it once the entire game.

The game is also limited to four save slots, but there is a New Game Plus and even a New Game Plus Plus, so this restriction didn’t really pose a problem, and there is enough variation to encourage multiple playthroughs anyway.

There is a strong sense of weight and power put into the equipment that the player carries around to make Harkyn feel like this very intimidating figure, something Lords of the Fallen tends to do better than even the Souls games. Armor ranges from the big and hulking layers of metal to thin, flowing robes that allow for quicker movement. The sound design is given special care here. Just listening to the deep, rumbling sound a tower shield makes when an enemy’s weapon bounces off of it is very satisfying.

Speaking of equipment, there is a nice breadth of variety to be had, and the game takes its time to reward you at every corner. Every big chest I would come across would way more often than not contain at least a piece of armor or a new weapon, all with their own pros and cons that serve as trade-offs such as damage dealt and weight expense.

Most of this equipment comes with Rune slots that are equippable later on in the game when the Forge is unlocked. Runes are items that can be picked up either from chests or from fallen enemies, and come in different grades: Lesser, Common, Higher, and Flawless. Throw a couple Flawless Luck Runes or Flawless Poison Runes on to a weapon, and suddenly bosses and enemies are killed in a few hits at least in the first playthrough. I loved it.

The bosses are a highlight of the game.
While Lords of the Fallen does have a few flaws when it comes to performance and its story pacing, the game does stand out a lot on its own with an impressive art style, very challenging but forgiving combat, and exciting gameplay.

The boss fights themselves are the real highlight with their multiple forms that kept me on my toes, and the different areas of the game are mapped in such a way that everything is woven seamlessly together so that getting from one place to the next only takes a moment if you know the right shortcuts, avoiding the sense of strict linearity or weird disconnect like in Dark Souls II.

They are also designed to be a lot more forgiving than the Souls games, in that there are actual walls and I wasn't constantly falling to my death at every corner.

The story may be its weakest link and the game could have used more polish to fix some of its weird technical problems, but at least the developers have something to build off of if they decide to make a sequel (which I certainly hope they do).

For the current generation of consoles, Lords of the Fallen stands as one of the best RPGs you can purchase, and is definitely worth a look if you’re hungry for something that shows off what this new hardware can accomplish. It’s a wonderful surprise from an unlikely source with a very fun and rewarding experience that creates its own signature in the growing Hardcore RPG sub-genre.

You can check out my take on the combat in Lords of the Fallen by reading my hands-on impressions from earlier this year.

Lords of the Fallen 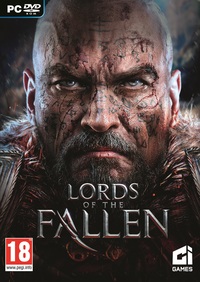 Series
Lords of the Fallen