Akiba’s Trip: Undead & Undressed had a lot of good things going for it when I first reviewed the original Vita release of the title a few months ago. The game looked incredibly sharp for a handheld title and had an incredible amount of depth when it came to character customization. However, it was held back by technical issues such as long load times, short draw distance, and sluggish performance at times.

Fortunately, North American publisher XSEED announced soon after the localization reveal that they would also be bringing over the PlayStation 4 version of the clothes-ripping, ramen-gorging, spending-my-entire-paycheck-at-a-hostess-bar Nerd Mecca simulator to us plebeians here in the West, marking one of the first RPGs that we have seen in the current gen. Even if that game happens to be a port, there are a lot of much-appreciated improvements to be enjoyed here. 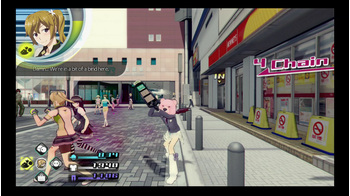 For starters, load times have drastically improved to the point where areas load at a fraction of the time that they used to. No longer does it feel like one big hassle having to traverse the mean streets of Akihabara without having to resort to the fast travel mechanic, which only mitigated the problem. I would say that the only issue with this is that when you only get to enjoy for a brief moment one of the many ads featuring licensed properties during these moments.

Visually, the game takes two steps forward and one step back. The draw distance has dramatically improved to the point where you actually feel like you’re in this giant mob of human traffic trying to get from one side of a block to another with a very small amount of the gender-specific cursors that I spoke about in my original review. The game also runs a lot smoother in both movement and combat.

However, it appears that the character portraits have not been updated for the higher resolution, instead remaining in sub-HD as compressed artifacts are present. That’s not to say the game looks bad by any means, but it would have been nice if some work went into the art.

The graphics themselves have seen a nice upgrade with the enhanced visuals, improved lighting and shadowing, and slightly more detailed character models, although the game certainly pales in comparison to other offerings on the platform and seems to still work best on the Vita’s 5-inch screen. 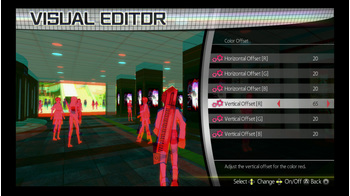 The crazy Visual Editor in action.
Little has changed with the core of Akihabara itself. More video ads have been included to promote games such as Disgaea 4: A Promise Revisited, the latest Super Sonico game title, and mobile titles like Snipai72. The downside is that there has been no increase in the number of places that can be visited which is a disappointment considering that was one of the biggest problems of the original, but that may have been asking for a bit much.

One of the more fascinating additions to the current-gen console release is the Visual Editor. Here the game allows players to completely change the look of the world. There is freedom to change the RGB color settings, adjust the saturation level, and change the sharpness and contrast with its wide assortment of filters. It’s a neat little gimmick, though while it is fun to mess around with, I don’t see it getting a whole lot of us other than for self-amusement. Still, I thought it was pretty cool.

Another great new element that takes advantage of the PS4 is the ability to have viewers interact with the player while they're streaming. This can be anywhere from calling in more enemies to fend off, bringing in outside help during difficult encounters, or even make a tornado of underwear appear that can be used to attack others.

It’s all very eccentric, to say the least, and is definitely one of the more appealing additions where you and a group of friends can all participate in this ridiculous adventure.

My favorite new feature is the Toybox Mode. Kind of like this game's version of “impulse101” typed into the console, this option lets you start off playing the game with every single weapon and piece of clothing that the game offers without having to put the effort into collecting any of it. 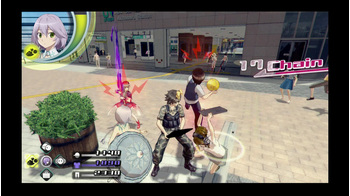 Being able to call on help while livestreaming is a great inclusion.
While you do have to sacrifice the ability to earn trophies and use bonuses earned from clearing a previous version, this gives people the opportunity to mess around the wide range of items available throughout the game to create their own personalized look and go nuts. Nothing quite like beating down enemies with a giant Neptunia hug pillow.

I did have a chance to try out Akiba's Trip on PS4 via Remote Play for a bit to see how it compares to the original. Obviously, it’s not going to look nearly as sharp in this form since it isn’t optimized and there isn’t any interaction with the touchscreen outside of making the in-game menu pop up, but it felt nice being able to see what it would have been like if the improvements with the PS4 release of the title had been carried down to the small screen, so first-time owners of the game can be satisfied with either format.

The PlayStation 4 entry of Akiba’s Trip: Undead & Undressed is clearly the best one available. With its improved visuals and performance, the ability to directly interact with other people streaming the game, and the fantastic addition of the Toybox Mode, those who have been sitting idly by for this to be released are going to find out that it was well worth the wait. 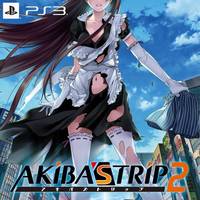