Another year, another Pokemon entry for the sizable fan base to dig their teeth into.  This time, though, is an entry many Pokemon veterans have been waiting for.  Omega Ruby and Alpha Sapphire (or ORAS for short) are remakes of the third generation of Pokemon games for the Game Boy Advance.  However, this is a bit more than just a remake, as ORAS takes Pokemon X and Y's engine and brings the classics into 3D.  How well do these eleven year old games translate to this new engine? 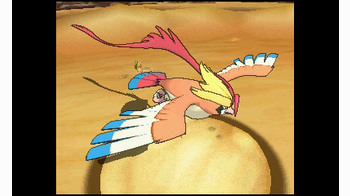 Mega Evolutions make a return in this installment, with a bunch of new Pokemon getting the Digi-volving like upgrade.
Pokemon ORAS, as a remake, mostly follows the same plot as the original Ruby and Sapphire.  As the new kid in Littleroot Town, you go off on a quest to become a Pokemon Champion, aiming to defeat the eight Gym Leaders and the Elite Four to become the greatest Trainer of all of Hoenn.  Of course, along the way you have to stop the threat of either Team Aqua or Team Magma (depending on the version you pick up), who is trying to cover the world in an unending sea or land, respectively.

It's a typical Pokemon plot, though there are a few decent twists to keep players hooked.  Having your father as a Gym Leader is an interesting thread at least, and adds a bit to the narrative at multiple points during the game.  Additionally, after the main story is complete, there's some all-new additional plot in the form of Episode Delta, which is surprisingly competent in terms of storytelling, as well as a goodly amount of world-building for the newer games.  It's a little disappointing that you have to wait until after the main game is complete to experience Episode Delta, but the fact that it's there gives you something to look forward to after beating the Elite Four.

It's also discouraging that there seems to be a distinct lack of... well, anything going on, really.  Routes seem just a bit too long, and with the "Exp. Share" giving all the Pokemon in the party a sizeable chunk of experience, the Trainers spread thinly across the area quickly become more a nuisance than a challenge.  It also does not help that Hoenn is notorious for its ample amount of Surfing Routes, and the combination of wild Pokemon encounters with more Trainers can slow progress to a snail's pace, especially if you're lacking the funds to buy a bunch of Repels.  While X and Y ultimately suffered from pacing issues as well, they were somewhat masked behind story bits and varied locales; unfortunately ORAS, most likely due to its older roots, does not hide its pacing problems nearly as well. 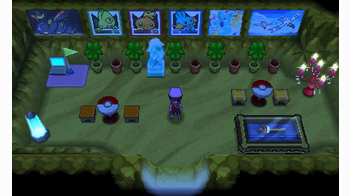 Super Secret Bases are a lot of fun to implement and decorate, and give you good reason to keep the 3DS with you for StreetPassing.
One thing that ORAS does not lack in, however, is the amount of content available to the player both during and after the main game is complete.  Pokemon X and Y ended up having an unfortunate lack of content after the story was complete, so the wealth of content here is sure to please.  Ruby and Sapphire were the first titles to introduce Pokemon Contests, and ORAS keeps a big focus on them with multiple locations to participate in throughout Heonn, as well as the ability to make PokeBlocks out of Berries to make your contestants happier and better able to perform in front of an audience.

In addition, there are the Super Secret Bases.  These Bases are hidden locales throughout Hoenn; you pick one, and can decorate your space with items you have collected along the adventure.  There is also good incentive to go out and get StreetPasses with others' Bases as collecting flags help to get neat bonuses.  It's always exciting to StreetPass someone, find their Secret Base in your game, and talk to them and possibly even battle them.  Better yet, you can register these new-found friends to sit at your own base, giving you the ability to talk and battle them at anytime.  It's bound to give many players plenty to do beyond the typical collecting and battling, with a broader and more worthwhile appeal than the Pokemon Contests can offer.

There are other features added in - some old, some new - to really help training and collecting.  There's the return of Pokemon Amie, Super Training, and the connectivity and O-Powers from X/Y, but DexNav is completely new to ORAS, and extremely helpful in finding rare Pokemon.  How it works is, every time you spot a new Pokemon on a route or cave (or even during a Trainer battle), it'll give you the Pokemon's silhouette in the Route(s) you can catch the Pokemon in.  Catch said Pokemon, and it'll become visible in the DexNav for any Route you can catch the Pokemon in.  The DexNav also lets you know if you've caught all the available Pokemon in the area, letting you know if you still need to find an elusive Pokemon or not.

But, that isn't all.  Every time you spot a Pokemon, whether you've caught it or not, it adds a level to the Pokemon's DexNav listing.  The higher the level gets, the more likely you'll find that Pokemon with a rare ability or with favorable stats.  Moreover, leveling up Pokemon DexNav entries works towards a 'hidden' overall DexNav level of sorts; the higher the levels you achieve, the easier it is to find wild Pokemon that can be difficult to find.

The DexNav gives plenty of incentive to go out on Routes and find wild Pokemon and trainers to fight, presenting players with tangible progress towards PokeDex completion, and can really help competitive players with the typical grind of finding favoarable Pokemon to work with. 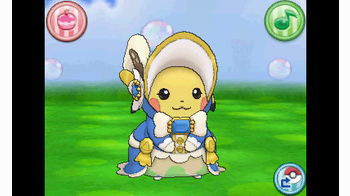 However, it's worth mentioning that since ORAS is using X and Y's engine, the title garners all the benefits of the impressive 3D engine, but also suffers from the same flaws.  Characters in-game get to be well-detailed and expressive (and it feels as though they emote far more often than the characters did in X/Y), and Hoenn being re-imagined in 3D is quite nice to look at.  On the flip side, though, the game suffers the same frame-rate drop if the 3D is on during battles, and the odd art-style disconnect of Game Freak using 3D models for a few important characters, but 2D stills for all other Trainers is sort of weird.  Still, the upgrades using the Generation VI engine is an overall positive one, and is sure to please fans awaiting this remake.
Advertisement. Keep scrolling for more

For me, as someone who skipped the entire third generation of Pokemon for the Game Boy Advance, I don't feel any nostalgia going into ORAS.  As such, I can certainly feel the source material's age even through the updates and the new coat of paint.  Hoenn, as a region, lends itself to a certain amount of tedium that is exasperated by the fact that players can go a long period of time with little happening other than walking or swimming.  However, that's also not a huge deal breaker, as most Pokemon games tend to fall into this misstep of pacing at some point or another.

There are other small issues, but this fact remains:  It's a Pokemon game, and it's not a bad game by any means.  Series veterans will no doubt get a kick out of the remake and its new look and storyline bits.  More casual fans will either want to give ORAS a shot because they missed the original, or skip it because they already own Pokemon X or Y and have no need for another entry in the same generation.

It's all a matter of perspective.  Pokemon Omega Ruby and Alpha Sapphire is exactly what you would expect; whether that's a good thing or not is up to you. 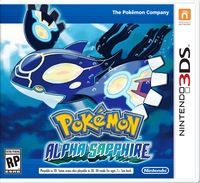