I am a big Dynasty Warriors fan. While many people look upon the series with a measure of disdain, I appreciate how satisfying it is mowing down thousands of people in a one-man army approach with a weapon that can reach to impossible lengths and abilities that make the world around you crumble.

I referred to Dynasty Warriors because Bladestorm: Nightmare follows many of the same conventions: it is you against an overwhelming wave of enemies coming in all shapes and sizes. The gameplay can get repetitive, it's chaotic, but the action remains entertaining. To balance things out, there are distinct tactical elements akin to the Kessen series that players will find enjoyable..

Players can experience either the Hundred Years War or Nightmare story campaigns.
Bladestorm: Nightmare’s story is set during the Hundred Years’ War that took place during in the 14th and 15th centuries, a series of skirmishes driven by a dispute between the English and French over who had control over the Kingdom of France’s throne.

The game weaves actual real life characters with fictional nobodies that’s both fascinating and welcoming. I have always been a sucker for period pieces in media, so by putting things in a historical context, Bladestorm had my attention from the start.

The player takes on the role of a mercenary able to take on missions from either the English or the French with contracts that can span several in-game days. While this seems like a fun prospect, your actions don’t seem to have much effect other than a story context.

There isn’t any world persistence - nothing carries over from one battle to the next other than the plot, so the only reason one would spend multiple days changing the map to your ally’s color unless it's to earn skill points and item drops.

Character creation is fairly simple, but the game offers plenty of customization.
In Bladestorm, you take command of several squads that all fill different roles: such as swordsmen, archers, cavalry, and even war elephants. Each squad comes with their own set of three different commands that can be used that consist of attacks or stat buffs.

Orders range from have a group of swordsmen tackle their way through a wall of soldiers to increasing the squad’s defensive ability to near immunity. All the commands come with their own cool down meter.

Each of these squads are upgradeable by earning the aforementioned skill points through battle and completing several objectives that mostly have you capture one of the many camps scattered across the map. These can increase the number of units in your squad and improve the effectiveness of the different commands.

The squads not in your direct control but have a squad leader can be ordered around to either attack or defend a specific point. The player can switch between these different squad leaders under their command using the different directions on the diagonal pad. They can even be recruited into your group to form a battalion of red eyed monsters ready to murder the oncoming tide.

Bladestorm falters in many of the same respects that Dynasty Warriors does. Maps are gigantic, sometimes taking several minutes to move from camp to camp, with little action going on in between unless you come across a random group of enemies who are just hanging out.

Forming battalions from groups of squads can make the overwhelmingly easier.
Also, by just focusing on leveling a single squad to Level 99, I could destroy everything in my path with just a few swings, save for a few encounters towards the end. There is little incentive to invest time in balancing out the rest of the squads unless your primary one is maxed out.

Speaking of which, the AI can sometimes be positively brain dead who seem only capable of either rushing you head first, running away, or standing still. They seem perfectly fine taking the pure brunt of a special move as death awaits them.

They are not completely brain dead as your allies can be left to their devices in defending or capturing a camp. However, it sometimes feels like the game does this deliberately as the enemy doesn’t seem all that willing to advance unless the other side does.

Where Bladestorm: Nightmare differentiates as a remake is by introducing the new “Nightmare” story campaign. While the English and French are caught up in their conflict, an army of demons suddenly emerge, wiping out most of their forces and many of their key leaders.

Joan of Arc finds herself caught up in the mess, and through the series of events including a kidnapping and the appearance of a mysterious sword, the player must fight his way through the minions of darkness to save the land from the spread of evil.

The Nightmare story campaign is a fascinating one to experience.
While the regular story had time limits that depended on the contracts, here, players are free to roam through the events of the plot They can take as much time as they deem necessary (though still being graded at the end of each battle for their efficiency). Overall, I really enjoyed the much darker tone of this story and it's the main draw here.

Though some of the problems of the original story rear its head, such as some wide expanses of nothingness, the challenge was also much higher even with a maxed out squad. The story is also far more engaging thanks to its fantasy nature. Nothing like taking on a horde of griffins, dragons, and giant Cyclopes to bring you in, especially when you eventually get to control them.

Although the experience got to be bland at times and the visuals are nothing spectacular other than the huge draw distance, I still enjoyed my time with Bladestorm: Nightmare, especially with its new story campaign that kept me engaged throughout its many hours of gameplay.

While the combat doesn’t seem all that impressive if you view it under a microscope, by viewing things more broadly, Bladestorm is one of the most exciting depictions of armies fighting each other outside of a real-time strategy game.

There’s a huge amount of content to be had here, both with the two story campaigns and the several squad combinations, armor and weapon sets, and trophies to earn in this entertaining adventure, making it worth a look. 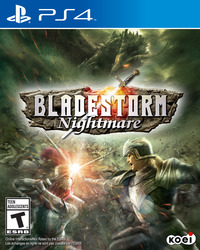