Marking the very first exclusive Japanese RPG for the new crop of gaming consoles, Omega Quintet is poised to make a mark and ideally set a solid foundation for what’s to come.

For the past several years, Compile Heart has found its biggest success with Hyperdimension Neptunia, a series which has spawned sequels, remakes, spin-offs, and even an anime. While Neptunia Victory II was just released in Japan, the developer took a chance on an original IP and brought it here to the West.

The focus of the story is on the cataclysmic appearance of the Blare who threaten the existence of mankind. The only thing stopping these monsters from destroying mankind are the Verse Maidens, young ladies who have the special power to eradicate them with the magical power of their music.

Come for the cute girls doing cute things, stay for the unexpected dialogue.
For years, the Verse Maiden Momoka has solely protected one of the last remaining strongholds yet to be destroyed by the Blare’s presence.

Her time of retirement draws near, and a new generation of Verse Maidens are tasked to step in to take over. Otoha along with her childhood male friend Takuto get caught up watching Momoka do her thing and soon find themselves thrust into this life-threatening lifestyle.

Whereas Hyperdimension Neptunia was itself a comedic parody of the video game industry, Omega Quintet sets its sights on the Japanese pop idol collective. Although you would think this presented plenty of opportunities for the writers to take jabs on a source of entertainment that inspires a cult-like following full of controversy and nigh-draconian rules, the subject isn’t breached that much outside of a few winks and nods - there is a lack of bite here.

The PVS, or Promotional Video System, provides a host of features for players to tinker with.
Truth be told, there aren’t many other elements that Compile Heart has implemented to take advantage of the PlayStation 4’s technical improvements.

What I will say is that the maps themselves are exponentially larger than what was seen in the Neptunia series to the point where I actually said “Wow” the more I explored the different corners of the areas.

The 2D character portraits are far more detailed than ever with a wide range of expressions and movements that are even more impressive than what was seen in Hyperdevotion Noire which I already thought was very appealing.

This becomes clear in combat: Compile Heart has always had a difficult time keeping the framerate steady when too many effects are on the screen especially during some of the more bombastic special moves. Here, everything runs smooth with no hint of slowdown. Outside of that, the level of detail is still dialed back with flat textures everywhere and recycled monster assets (though there are plenty of original designs)..

The peripheral content has inherent issues. The side missions themselves are filtered into three different objectives: you are collecting something, looking for an item, or defeating a specific monster, or monsters. They never detract away from this so they feel a bit bland though they do ask for materials that are harder to find.

The levels are a magnitude larger than anything I have seen in a Compile Heart developed RPG.
All the maps have branching paths that are gated from progression with obstacles. These can be removed by using upgradeable, character-specific exploration abilities, like knocking down obstructions or destroying magical barriers.

The problem is that main story missions can sometimes be hidden behind these things. I was perplexed at certain points in the game not knowing what to do next as a result.

Outside of combat, players can partake in different training missions - this game's version of a challenge tower with increasingly difficult enemies. You can also buy and equip new costumes and outfits using special "Coin" currency earned during the game. There is a simple crafting system to make new weapons and accessories. Finally, you can engage in conversations with the Verse Maidens in order to earn their Affection which helps to unlock special scenes and the True Ending, which is difficult to achieve.

One of the most surprising things about Omega Quintet is how robust the video editing feature can be, profoundly more impressive than anything Neptunia PP could manage. Players have a ton of control over every element of video-making process including changing camera angles, who the performers are, their choreography, and much more.

I kind of wish it played a bigger part in the story because the only times you mess with it are the few random quests given. Still, I applaud the work that went into it.

Far and away, the best feature in Omega Quintet are the battles themselves. Compile Heart put a lot of work into providing a complex system. Each Verse Maiden can learn and equip different basic skills and weapon abilities.

Players are free to choose whatever weapon they desire for their party members, but I stuck with what they start with. By constantly using that weapon, their proficiency can go up allowing them to perform more actions on each turn which can make all the difference as the game becomes progressively more difficult.

The Harmonics feature allows the group to execute Chain Skills learned over the course of the game. If two or more party members are next to each other in the turn order and Takt has enough support points, the player is given time to destroy an enemy even before they can take their first turn.

There is a special meter called the Voltage Gauge that can be changed to offer boosts to the party depending on the level it is at. This gauge increases up by landing successful hits, likewise moves down by either taking damage or using special moves that rely on that meter.

Advertisement. Keep scrolling for more
Supported by the Harmonics and Live Concert Mode, the battle system in Omega Quintet is fun and rewarding.
This can be activated on the battle menu as long as it is at least Level 1 using the Live Concert Mode, lasting so long as a character doesn’t die.

Flash Effects are special effects that occur during battle. They include things such as EXP Up, Heal HP, or SP Use Down. When turns roll around on the order list on the right side of the screen, a certain effect can occur.

This not only affects the party but the enemy, making combat more dynamic as your actions can impact where the party member will end up in the turn order. Aside from avoiding the bad effects and reaping the good ones, it also forces the enemy to eat ones that can cause problems like a higher damage rate. That is just a taste of the intricacies of the combat. It is brilliant.

Character customization is flushed out with the use of skill trees presented as a grid with nodes using points earned by leveling up and increasing weapon proficiency. This can unlock new skills and latent buffs that leaves it up to the player to go in whatever direction they choose.

While Omega Quintet will not turn any heads for its visuals, and the story can be sometimes obfuscated, the combat system and highly robust video editing mode are its most impressive traits.

It provides plenty of side content for players to bite into though some of it can be mundane. It is a good first step for the future of Compile Heart’s development with the smoothed-over framerate and short load times.

There are a few caveats to be had, especially how the game doesn't go far enough with what it drew inspiration from, but I had a good time with Omega Quintet and enjoyed a bit of everything it offered. This is a game meant to cater towards the same super niche audience that Hyperdimension Neptunia serves, so you should know whether this game is for you. 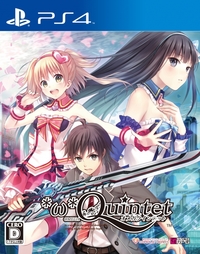