It seems like so little time has passed since the release of Code: Realize gave a new otome title to a normally ignored Western audience… probably because it really has been only a few weeks! But, it seems Aksys isn’t content with just offering one otome visual novel for the holiday rush and just released Norn9: Var Commons for PlayStation Vita just last week. Given the rush of triple A products and a growing number of of visual novels alike, it’s hard for Norn9 to stand out amongst the slew of releases and even fails to stand its ground against its limited, direct otome competition.

Norn9 begins with the player in the shoes of Sorata, an unusually gifted and smart elementary student. The young boy seems discontent with his life, but things radically change during a school field trip when he is transported to a strange past, complete with flying airships and humans who can wield magical powers. 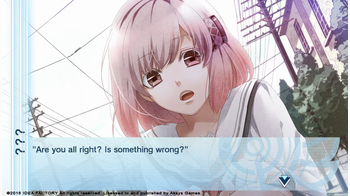 Koharu is one of the three female leads you'll eventually be able to play as.
The perspective quickly changes to one of the three ladies on board the airship, however, and depending on which of the girls you choose, the player will have a different set of eligible bachelors to try to woo. Each girl has three paths of their own to choose from, leading to Norn9 having a prologue, nine different character paths, and an epilogue that’s only shown once all the paths are complete.

That seems like a lot of content for a visual novel, but it’s actually due to all of these character paths that most of Norn9’s issues arise. The prologue is very short, and immediately after you’re forced to choose one of the three ladies, with little knowledge of the personalities of the girls or even meet all of the characters, which may lead to players being forced into a path they may not want or like.

Then, there is the problem of the game’s pacing. Since there are nine separate paths to work through, they actually move at a pretty decent pace, allowing each path to be completed in a couple hours. However, the writers did a poor job of conveying certain story elements (such as the passage of time), making the paths feel uneven. Some feel like characters develop romantic feelings for one another in mere days, while others appear to have a more appropriate period of time pass throughout the path. It’s seems like a minor gripe, but it can really mess with players’ perceptions of the burgeoning romance happening between two characters (and despite the unusual setting, romance is the main plot drive of Norn9), and make stories seem stilted or rushed. 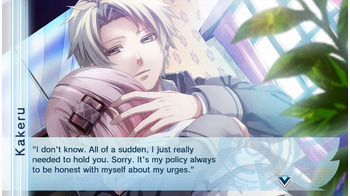 Norn9 has a heavy focus on romance, which may deter players looking for a plot focused tale.
When you get down to it, these problems aren’t game-breaking, but they can hamper the experience a bit. On the whole, though, Norn9 does have an intriguing overarching plot that’s slowly revealed playthrough by playthrough. While it isn’t the at the forefront of the visual novel, learning the various bits and pieces of the strange world and unusual circumstances is a worthwhile endeavor.

As it is a visual novel, Norn9 doesn’t have any gameplay to speak of, only text to read and decisions to make. In general, players have to get the affection of their chosen character as maxed out as possible, which is easy to keep track of due to on-screen prompts and the ability to rewind to choices. It’s not particularly hard to get all of the character’s happy endings, though a couple paths have some quirks that are easy to go back and fix.

What it comes down to, though, is that this isn’t the only otome game to come out in a relatively short period of time, and as such Norn9 in direct competition with Code: Realize for both attention and sales… and of the two, Norn9 is the inferior product. The title is by no means bad, but the character path shortcomings coupled with Aksys’s localization errors and typos makes it difficult to wholeheartedly recommend. It’s worth a purchase for an otome fan, as it’s a decent title of a genre that is severely limited in English, but the heavy focus on romance is not going to appeal to everyone. 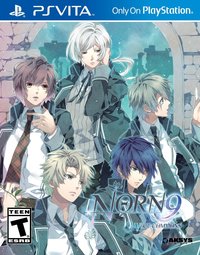