The final game from Imageepoch is one of the few isometric-style strategy RPGs  we've seen recently but that be that as it may, does that excuse justify taking a gander at Stella Glow? The game’s primary focus on its quirky characters, interesting battles, and decent length will give players a worthwhile time. The question is, how worthwhile is it?

Stella Glow’s story isn’t anything particularly fancy and in fact is very reminiscent to Luminous Arc, another isometric strategy RPG from imageepoch a long time ago. You play as an amnesiac young boy named Alto in a small town in the countryside with your newly adopted family. Things get a little rough when he meets a witch Hilda and his friend is transformed into a witch herself.

The premise itself isn’t anything offensive nor grand; in fact it plays it pretty safe by treading grounds that were paved before. The story’s twists and turns are pretty much non-existent but the journey as Alto claims his rightful place as the world’s hero while maintaining a healthy relationship with his harem of witches is interesting its own right.

Witches will sing for you to grant buffs!
While the game doesn’t follow the tropey archetypes laid out by popular games from companies such as NISA, Compile Heart, and others, Stella Glow somehow seems to take inspirations from it. You’ll have moments of serious story developments such as deaths and betrayals but they never feel all that impactful as it's snatched away by the script’s prevalence in falling into fanservice territories.

Unfortunately, most of this has to do with the game’s terrible cast of characters. Alto’s companions, and even worse Alto, are flat characters throughout the game. They have moments of redemption and character change but they quickly revert back as if nothing happened. As a result the payoff for clearing character arcs in the game, and the narrative as a whole, feel pointless and the whole effort rings hollow.

The parts of the story that do stand out are the game’s script overall and localization. The lines read from many of the characters feel realistic and sound like banter that would be found among friends. Liberal use of curse words definitely helps to immerse the realism but it’s the script in tandem with the game’s great voice acting that gives the story more impact that it really should have.

I love guns.
The game is broken up into multiple chapters with a major narrative arc that occurs in every chapter. The chapters are then further divided into two primary categories: free time and mission time. During the free time Alto has the ability to interact with his companions and develop their relationships. You’ll get a funny piece of dialogue here and there but for the most part it’s largely used to facilitate the growth of your characters when enemies come marching toward you as he or she will learn new abilities and skills.

Not only that but the relationships you forge will change the eventual narrative outcome of the game so it feels like for the most part your effort in engaging with certain characters is worthwhile. Other uses of free time can include taking on jobs to earn money, exploring the world for items, or tuning witches.

Witches are essentially the world’s goddesses that have immense power over the elements that rule the lands. There’s the obvious fire, earth, water, and wind and each element is personified in one of your female companions. While these witches are very useful in combat, they also require additional attention that your other normal party members don’t. Witches will sometimes close off their hearts to Alto and it’s up to him to “tune” them to progress the relationship. By tuning you’re able to further the relationship. It’s an interesting idea in theory as you are limited in the amount of free time you have so choosing who to develop is very important.

Advertisement. Keep scrolling for more
Watch where you walk...
When you’re not off gallivanting with women or scouring the earth for some dingy item, you’ll be on a mission. During these missions you’ll see a cutscene here and there that progresses the story followed by a swarm of enemies that will engage on you.

While the goals for the missions will change from time to time, the large amount of missions will depend on you wiping out every opposition on the map. The battles aren’t too tricky or difficult but you’ll have to be careful if you want to complete secondary objectives. These secondary objectives can change how you approach a mission and the characters you use in battle. Fulfilling these objectives can reward you with nice items that will give you a sizeable buff for battles to come.

Out on the field of battle you’ll control a limited amount of characters across an isometric map with numerous obstacles and terrain that will make each mission feel different. The enemies are fairly competent and will always try to single out your weakest characters making it essential to have the proper format at all times.

That being said you’re not without deadly tools of war. Each character brings different abilities and skills to the field. Rusty for example can move throughout the map with no terrain affecting his movement. Sakuya can enhance the attack and critical rates of nearby party members. Party composition is definitely important to think about but sadly, the missions aren’t difficult nor are they designed with this mindset.

Tuning is essential.
Despite missions themselves not posing too much of a challenge on their own, the characters all have fun skills to unleash on enemies and making sure you get the leg up on them by attacking their back or a creating a line of scrimmage is absolutely exhilarating. You constantly feel like the game offers you numerous options to tackle the challenges that are set before you.

Outside of battle you can craft your machinations of war by creating gems that change how your characters conduct themselves in combat. Do you want Popo to be a ranged status debuffer? You can add gems to Popo’s weapon so enemies are paralyzed or poisoned. The same can be said for Alto’s stats. If you wish to heighten his attack then the tools are available as well. While battle is important, preparation is equally as well. There aren’t too many things to alter about the characters but you always have your character’s growth to fall back on as they learn many things.

What Stella Glow does isn’t anything revolutionary or spectacular but instead it tries to bring a genre that prides itself on interesting game mechanics and devices to the forefront. The narrative isn’t the most enticing, but it’s a serviceable story that will keep players intrigued from beginning to end. The package that is Stella Glow is one definitely worth checking out especially if you have an itch for a strategy game that harkens back to the good ol’ isometric days. 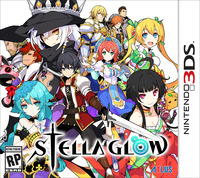