Romance of the Three Kingdoms is a series of classic novels by legendary author Luo Guanzhong who romanticized a tumultuous period in China's history that lasted for over a century as a constant state of conflict left the nation in flux until it was eventually unified under a single banner.

The popularity of these pieces of literature spawned countless TV shows, movies, anime, manga, and of course, a multitude of video games in a variety of genres. None other have had a more successful history with this than Koei Tecmo.

It has been several years since fans in the West have seen an entry in the seminal strategy series, popularized by its exceptional attention to detail and wealth of content. In honor of its 30th anniversary, Koei Tecmo has finally abated our hunger by localizing Romance of the Three Kingdoms XIII. 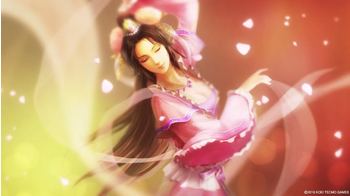 For newcomers to the series, the game delivers a lengthy tutorial in the form of the Hero Mode. This combines detailed descriptions of every aspect in the game with historical context, walking players through the Three Kingdoms period and helping to familiarize with the different features. Complex at first, it doesn’t take long to get a hang of the basic concepts thanks to the help of the automated processes.

Each dynasty has its own group of officers complete with their own portrait. Each officer comes with their own flavor text to allow players to get to know them. Unless you have played a Romance of the Three Kingdoms or Dynasty Warriors game before, many could find themselves overwhelmed by the constant flood of information and exposition being thrown at them. For these people, it is probably best just to pay attention to an officer’s rank rather than their moniker.

This plethora of material helps create this incredible narrative that fans of RPGs may get excited about. Few games allow you to understand each character’s motivations, backgrounds, fortes, aptitudes, preferences, moralities, and more.

This carries over to the Edit Officer feature in the game. Aside from modifying current historical officers, players can opt to create their own like in other games. You can decide whether to create a character with a realistic feature set, or completely break the game by maxing out every stat and ability. 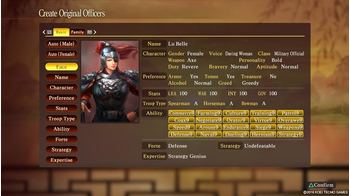 This custom officer can be carried over to the Main game that puts the focus on the different scenarios that made up the Three Kingdoms period, including the famous Yellow Turban Rebellion and The Anti Dong Zhuo Coalition. There, players can align themselves with one of the of the warring parties or take up the call and unify the nation independently if they so desire.

Speaking of which, the most fascinating aspect in Romance of the Three Kingdoms XIII is the ability to start as a lone mercenary, searching for a master and proceeding to climb the internal ranks of a kingdom until eventually reaching the goal of becoming emperor.

This feature only appeared in a handful of entries as many others required you to have far more control over your day-to-day activities. There’s something appealing about not having so much responsibilities, but continuing to have a tangible effect on the nation as I made my way into the role of a governor of different cities.

There are some nice touches provided by the game. Each officer has different stats that play an important piece in their effectiveness in a given role. For example, when trying to argue my case on why the kingdom should take up a strong domestic policy, I may get rebuked by another powerful officer who gains a near-equal amount of support from our peers.

To prove my case, a turn-based debating minigame begins. Using the power of assertion, provocation, proclamation, and rebuttal, I can whittle down my opponent’s life bar. After five rounds, whoever has the most health wins.

This same feature carries over to duels that can happen randomly during battle which can play a huge role in the turning the tide. Your character’s stats dictate their effectiveness in either minigame. 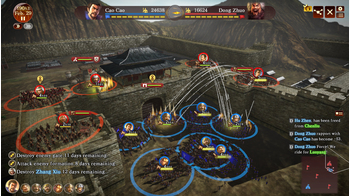 Speaking of which, when taking place in a field of war or laying siege to a castle, you take control of a group of soldiers or the entire army (depending on your rank). Some battles may begin with you choosing where to place your troops into different strongholds, but mostly, you’ll be charging straight into the enemy ranks.

The controls are fairly simple. By holding down the X button and using the analog stick, a selection box appears not unlike your typical real-time strategy game. You can decide whether to move towards a given location or attack a stronghold/officer. It is up to the player whether to do a divide-and-conquer approach or perform a pincer attack.

Morale plays a huge role in your effectiveness. By taking control of strongholds or defeating officers, the enemy’s morale can drop causing their troops to dwindle at a quicker rate. Officers may also have different special abilities that can be triggered to create buffs or debuffs. This can include decreasing the damage of enemy archers or greatly increasing your defense.

Each battle you take control of has different objectives that can increase your ending score. By performing exceptionally well during combat, this score plays a part in affecting your rank. The top 3 officers can earn extra prestige which plays an important role in increasing their overall rank.

It’s not for everyone. The action can be overtly simplified especially compared to earlier entries in the series. The game also struggles at times with its pacing, controls, and framerate. Still, I applaud Koei Tecmo for doing an impressive job in delivering a competent strategy gaming experience on the console. Couple that with the sheer amount of depth, and Romance of the Three Kingdoms XIII is an incredibly addictive experience.

Kingdoms of Amalur: Reckoning moves 410K units in the US

Romance of the Three Kingdoms XIII 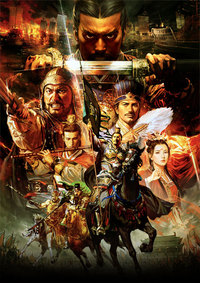 Series
Romance of the Three Kingdoms

Nobunaga's Ambition: Sphere of Influence - Ascension
Toukiden: The Age of Demons
Berserk and the Band of the Hawk
Atelier Lydie & Suelle: The Alchemists and the Mysterious Paintings
Atelier Ayesha: The Alchemist of Dusk