My relationship with the Kingdom Hearts series is a bit of a weird one. I was the perfect target audience for the first game: a kid who grew up in the Lion King, Beauty and the Beast, and Aladdin 90s heyday of Walt Disney Animation Studios and, crucially, a fan of Final Fantasy. Kingdom Hearts was thus massive for me: a combination of two things I utterly adored, I loved the first game.

As the series wore on, my interest waned. The series became, I felt, less about whimsical Disney cross-overs and more about its own internal plot. It was a plot I felt was incomprehensibly tangled and so the series lost me. One such casualty of that was Kingdom Hearts 3D: Dream Drop Distance - I remember playing a preview build in Square's office for about 4 hours only to come away with a particularly bad taste in my mouth. I never played the final release.

I have a chance to rectify that now, however! KH3D, aka Dream Drop Distance, is the main component of Kingdom Hearts HD 2.8 Final Chapter Prologue - in fact, compared to the two in both Kingdom Hearts 1.5 and 2.5, it's the only 'full' game in the package.

The rest of the package is made up of Kingdom Hearts 0.2 Birth By Sleep: A Fragmentary Passage and X Back Cover, a CG movie of sorts. Both of these serve to fill in key plot details in the run-up to Kingdom Hearts 3 - and that's what this is, really, a KH3 prequel game.

Let's talk about Dream Drop Distance first. To begin with it seems pretty obvious to drop in a link to our 7/10 review of that game's 3DS version from back in 2012. It is ultimately still the same game, though what's most pleasing is that this feels like the most competent and accomplished of the high definition conversions of the older KH titles to date - perhaps because it was originally on a much weaker machine.

There are elements of Dream Drop Distance that stand out as original and fun, with the biggest statement the game makes coming in the form of the Spirits, the good-guy Dream Eater creatures who come to your side and grow throughout the game. This is an element of the game that perhaps felt better suited to 3DS - there you could pet the spirits using the touch screen and take them out with you into the real world.

All of this has been lovingly and carefully translated to the big screen and it all works well enough. It's clear that the team behind the game didn't want to make major changes, and so it's a faithful port even in places where it does make a little less sense. Regardless, it works and remains a compelling and cute system. On the flip side the 'Drop' system that forces character switches also lives on, and it still sucks. This is the pattern.

David's biggest issue with the game in its 2012 review is absent entirely thanks to the fact that the camera, a nightmare on 3DS, now functions like the other classic KH games. This also makes Dream Drop Distance's signature Flowmotion battle sequences a little more satisfying, but flowmotion itself is still a bit of a problem, sucking the challenge out of encounters and encouraging more flat and empty level design to facilitate its frantic, fast-moving combat.

For better and worse this is a faithful port, but there's a lot to love in Dream Drop Distance and I'm glad I finally got the chance to play it. Even though it's an early pull I was particularly thrilled to see a modern Tron world - and that's one of the worlds that benefits more from the boost in visual fidelity the game has.

After playing it here I can absolutely see where David's 7/10 score for KH3D came from, and here in its big-screen, non-3D variant it's of a similar quality: worse than Birth By Sleep but better than the other KH handheld offerings, it's worth a run for fans.

Okay, let's talk about the new stuff. X Back Cover is a new animated feature that is actually the backstory from a mobile game. Without context on that mobile game (wiki it beforehand) the movie seems to come a little out of left-field, but it's good looking, sets up Birth By Sleep solidly and is lovingly produced.

It's 80 minutes long, so there's a decent amount to it. It's really only something one can recommend to hardcore fans, but anyone can appreciate the dedication to their storylines Square Enix demonstrate when they drop things like this into a package.

It follows Birth By Sleep favorite Aqua, and I actually found it to be a refreshing contrast to Dream Drop Distance. Where that game is awash with features, many of them executed in a middling way, this is a more simplistic and easy-to-play game that feels better for it, even if it also doesn't feel like depth has been sacrificed. This bodes well for KH3.

It's not the largest experience in the world (expect 2-3 hours at most including a good half-hour of ending cutscenes that set-up KH3), but 0.2 is a wonderful glimpse into the next full KH game after a slew of spin-offs.

It's running on Unreal, it looks gorgeous, the colorful KH art style popping beautifully at this standard of graphics. After years trapped on handhelds and the like, this is KH filling its visual potential. The game gets a bit framey as it struggles to retain a solid 60fps, but as a tech demo for a game not out for a while goes it's pretty solid.

The stripped-back mini-episode format actually works in 0.2's favor in a sense - it keeps things simple, offering a streamlined taste of KH3. I wonder if this would've captured new fans had it been released as a straight-up demo, but it's instead part of this fans-only package.

The breadth of KH 0.2's content is really the axis upon which my recommendation of this game rests. How badly do you want to play a HD version of Dream Drop Distance? Did you love that game, or are you a series fan who never owned a 3DS? If yes, this is the definitive version of that game and a solid value. 0.2 alone should not be anybody's reason to buy this game, however: for all intents and purposes it is a demo. Dream Drop Distance is the meat.

For fans this is something of a no-brainer, especially after a price drop. Others may want to consider carefully, though that taste of KH3 is still rather difficult to resist. Kingdom Hearts 2.8 is ultimately a collection of a good but not great game, an exciting demo and a hardcore-fans-only movie - and hearing that you probably already know exactly where you stand. 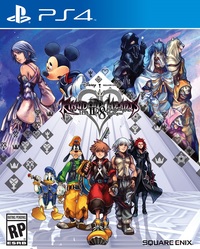