To start off with a bit of background information, Fallen Legion: Sins of an Empire is a game developed by YummyYummyTummy Inc, a company known for developing educational games. Although I can't say I've played any of their titles, this marks their first venture into the console market. I wasn't expecting a lot from it given the track record of the company, but I was rather surprised by how it reminded me of Valkyrie Profile.

Depending on which version you purchase, you play as a different main character. If you own the PS4 version, you play as Princess Cecile, and in the Vita version, you play as General Laendur, who is on the opposite faction. You are thrust into the middle of a medieval political saga, but the game doesn't provide a lot of exposition about this. It's sort of like picking up a book and starting in the middle and trying to figure out what's happening.

The problem lies when you're asked to make choices for a world you know very little about and without really knowing the consequences. For example, you will get an option along the lines of: "Prince A meets with Prince B. What should you do? Ignore them, stop them, or meet them?" When you know little to nothing about these characters, it just makes the whole system unnecessary. 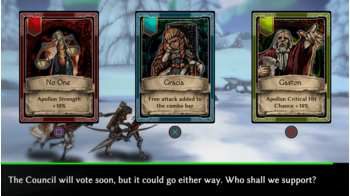 You will only have 30 seconds to select a political choice. Without having an informed opinion, most choices appear to be nonsensical.
The developers lead you to believe that this is an important mechanic, but the impact on the game was simply unlocking certain stages based on your morale. The game does have a glossary section to provide some lore for players, though it's limited to the details it provides. If you decide to revisit the stages, political choices will be gone and replaced with a temporary status bonus.

Unlike a game like Valkyrie Profile, Fallen Legion's story progression is split up into stages. Each stage has the protagonist summon a group of exemplars to protect them while they defeat the enemies. If the enemies manage to defeat your exemplars, the protagonist will be vulnerable, leading to an instant game over.

The battle system is presented as an action RPG shown in a 2D side-scrolling perspective. And like Valkyrie Profile, each character will perform an action when you press the button assigned to them. The protagonist will cast magic from afar. As you attack, a combo chain is kept to further boost your damage. However, the chain will be broken if you're hit, which brings in another key feature of this game - the guarding system. If you timed your guard perfectly, the combo chain is kept and you will take no damage.

It is impossible to play this game without taking advantage of this mechanic. While the battle system is very fun, it does feel a bit chaotic at times, making it really hard to guard against attacks. In fact, it's actually easier to guard when you're left with one exemplar as you'll have a better time seeing the enemy's attack pattern.

The game also provides a harder difficulty, the One Life Mode option, which plays the same as the normal difficulty except when the protagonist dies, you will be forced to start from the beginning of the game. The main reward of beating this mode is that it unlocks the true final stage, but this option can also be unlocked by simply completing another playthrough. Although the battle system might seem a bit button mashy at first, it starts to show its true colors when the bosses punish you for not learning their attack patterns. 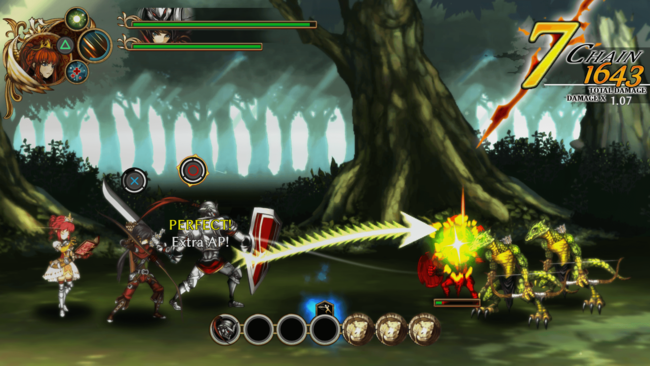 Character customization is fairly limited. As you clear stages, you find gemstones that can buff up your party, though the game will only let you equip three gemstones at a time. As you progress further in the story, you can unlock additional abilities for your exemplars.

These are mainly just super attacks that are upgraded versions of other abilities. It's not exactly imperative that you take advantage of these, as they are a bit complicated and the payoff isn't all that great. There isn't much in the way of options, which doesn't detract from the experience, but it does leave you wanting more.

One of the strongest points of Fallen Legion is the presentation. This includes the game's artistic direction which has detailed 2D spritework similar to Vanilliaware. If there are any complaints about the visuals, It would be the portrait art isn't in the same quality as the sprites, but this is only my personal issue with it.

The music is another great highlight. I am not much of an expert in music myself, but every stage has a fast, energetic track that kept the game from ever getting dull. It adds a lot to the game and the execution is great.

Although I have a few gripes with the game, my overall time with Fallen Legion was a pleasant one - the developer did an excellent job with their first game on consoles. While it lacks a bit of polish and is quite rough around the edges, it makes up for it by providing a great experience that doesn't overstay its welcome. I found that many of these issues could be fixed in their next attempt, and I am looking forward to it.

Fallen Legion: Sins of an Empire 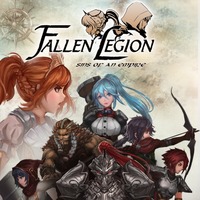