Assassin’s Creed is one of Ubisoft’s largest and most recognizable franchises to date. It's spawned multiple sequels and spin-off titles over numerous platforms, plus a recent movie. After taking a two year break from Assassin's Creed after Syndicate, Ubisoft has gone back to the drawing board and overhauled many systems in this latest iteration. Assassin's Creed: Origins aims to explore the beginnings of this sprawling universe.

Unfortunately, the increased development cycle hasn't necessarily made for a better game. Origins has strong ideas and a brilliant overworld, but odd story pacing and numerous bugs left me with mixed feelings.

Disclaimer: The review copy I received also included the day one patch of Assassin’s Creed Origins and came with the items available to the Deluxe Edition of the game. This review is spoiler-free. 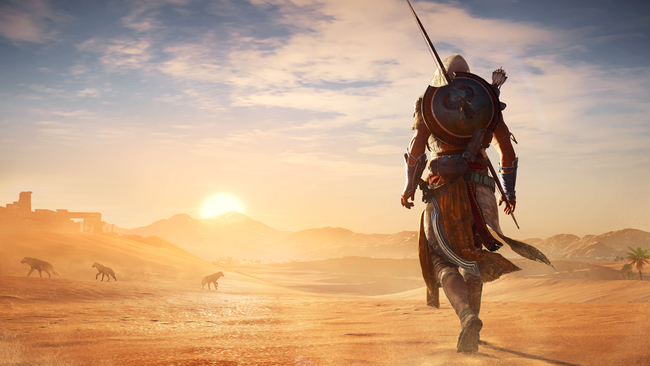 Assassin’s Creed: Origins starts with an awkward, incoherent introduction. Several flashbacks attempt to explain Bayek’s incentive in pursuing The Order of the Ancients. He ultimately sets off to uncover the identities of this faceless organization for personal reasons.

The narrative of Origins is understandably rife with violence thanks to the setting and the subject matter, but it's awfully heavy-handed at reminding you that death is a means to an end no matter the cost. There are numerous superflouous-feeling scenes of women and children subjected to violence, with the game's strange obsession with placing enormous emphasis on these moments. These scenes became tiresome, and my hope that these scenes would be paid off in the form of truly hateable antagonists was ultimately dashed.

The antagonists of Origins' narrative are sadly barely fleshed out. Personal monologues are included and each is tied to the overarching theme of the game, but there's little to no actual substance behind them. Their motivations remain unclear, and ultimately these characters fail to land. This is part of a running theme with Origins. 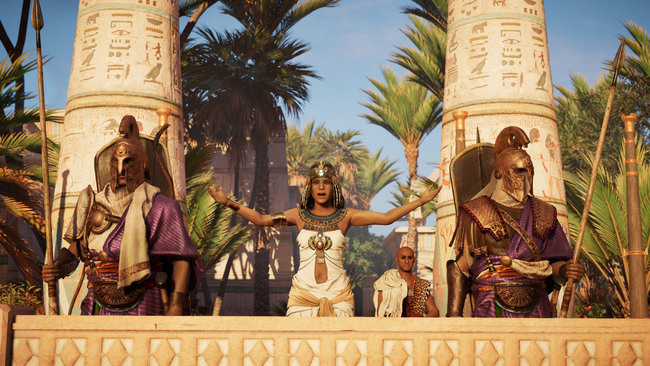 My greatest source of disappointment with Origins lies in its poor narrative presentation. Brief cutscenes barely give key players to the plot any chance to characterize themselves. On top of that, facial animations are often stiff and don't reflect the voice acting one bit. Bayek and the NPC he's speaking to oddly remain inert and robotically flail their arms about the injustice beset upon them through the Ptolemic reign.

This is properly successful open-world design, as when the world is working as intended it draws you into it completely.
Advertisement. Keep scrolling for more

I also had several instances in which characters would not appear during cutscenes and Bayek would just be talking to a wall. He stared at nothingness in silence as the scene "normally" played out. While the story desperately tried to tug at my heartstrings with some pretty weighty events, all these bugs and errors ultimately made those efforts feel futile to me.

Meanwhile, side quests in Origins are still handled similarly to past installments. Quests are littered throughout Egypt and can provide Bayek with weapons or experience. Side quests usually tried to educate me about Egypt or give Bayek some form of personality, to varying degrees of success. The combination of flavor text and valuable experience meant that I found myself getting stuck into more of these than I otherwise might've.

New to Assassin’s Creed: Origins are another kind of quest - daily quests. Players receive a random rare weapon drop upon their completion. I came back to do this at every given opportunity, but not to keep the rewarded weapon. I broke them into materials to enhance my hidden blade or bracers instead. None of these side quests particularly memorable and of course, they had their fair share of bugs too! Sometimes I'd be unable to complete quests with issues like an NPC glitching into the ground or getting stuck in an endless dialogue loop with Bayek. I was forced to restart the game numerous times in order to complete quests.

Plus, there were also bugs that hindered my story progression. One of the earlier ones had me in an endless loading screen. I figured it was time to restart after twenty minutes of it and this particular issue happened twice. There were other game crashes besides that too. My favorite times to restart were when story related NPCs glitched into their surroundings and I couldn't move on without them. 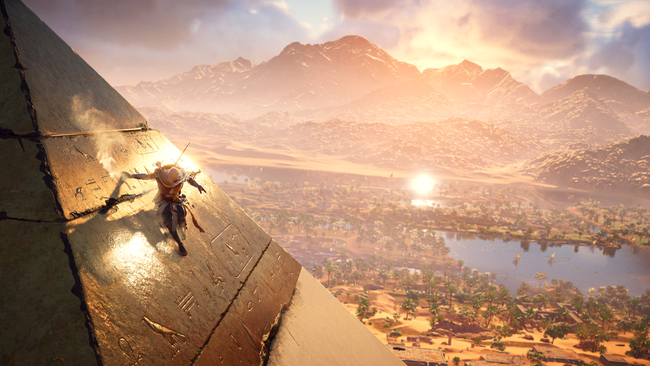 It's crushingly disappointing to see a new Assassin's Creed still suffer these kinds of problems at launch, even with the extended development time. People mocked Unity for disappearing faces, but even with the extra time Origins is looking pretty rough.

It's crushingly disappointing to see a new Assassin's Creed still suffer these kinds of problems at launch, even with the extended development time.

Despite all of this, I genuinely enjoyed the open world experience of Assassin's Creed: Origins. The environments are beautifully rendered and the different locales you visit all have a unique identity. Colorful buildings are offset by sprawling deserts that stretch out perpetually or blend into swamps with the occasional oasis.

I wanted to look for ideal vantage points that allowed me to simply soak in the view. This is properly successful open-world design, as when the word is working as intended it draws you into it completely.

Scaling buildings, statues, and any other object is relatively easy in Origins, so they didn't take too much of my time now. There are a handful of challenging jumping puzzles still available, but this mechanic seems to have finally been smoothed out.

Utilizing Bayek’s eagle companion, Senu, has some neat perks to it too. The bird’s eye view allowed me to take in the scope of some these environments; it can target landmarks or objectives with ease. 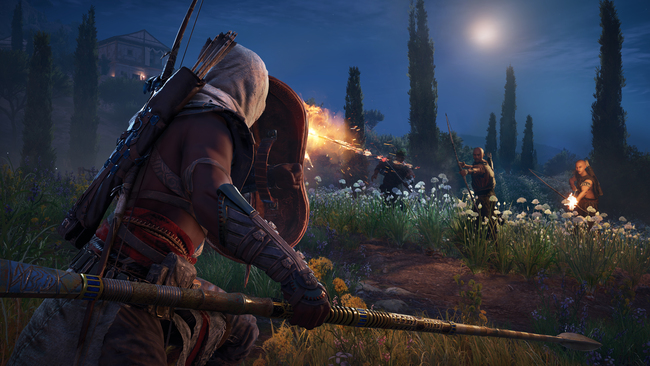 Conversely, combat in Origins has needs room for improvement even after all the tweaking they’ve done. It's much more of an action RPG now; damage values fly off enemies and there's color-coded loot now. On a website like this we of course value this. While battles in Origins strike a nice sense of flow with a weighty feeling, it remains fairly simple when all is said and done. I ended up resorting to the same strategy numerous times once again, and the thought strikes that the game might've benefitted from the sort of adaptive AI we recently saw in Shadow of War.

Skills that empower Bayek’s heavy attacks to knock away shields or deliver crippling blows became essential. I was often forced to forgo stealth and thrown into the fray. Combat devolved into a rinse and repeat of breaking through defenses with heavy attacks. This being said, stealth-based combat is still immensely satisfying and remains a highlight of the series.

The skill tree in Assassin's Creed: Origins allows you to increase Bayek’s aptitude in either ranged or melee combat as one Action Point, or AP, is rewarded per level. This branching path offers a handful of abilities and I specialized in skills to make encounters less of a nuisance. I also thought about investing in passive skills to buy rarer objects with merchants but chose otherwise to make combat less tiresome.

In the end, I prioritized combat skills to avoid grinding any more than I felt necessary. AP is purchasable through the shop with Helix Coins, the in-game currency. I used my coins to purchase upgrade materials for my weapons instead.

Helix Coins can be received by completing specific in-game achievements and can be redeemed for a variety of rewards. Not all of them involve extra AP points or materials; weapons can be redeemed for a fairly large sum if you absolutely must have that extra edge in combat. Cosmetic items, like mounts and outfits, are also available to purchase.

I found the exchange for materials the most appealing option as stalking wild animals and material shipments throughout Egypt became more of a boring time sink than an entertaining harvesting system.

Assassin’s Creed: Origins offers an engrossing and deeply satisfying open world in the lands of Egypt. Gorgeous visuals make it a lovely place to explore with rich environments. Still, the excessive amount of bugs at launch are devastating and hampered my experience significantly. Add to that a poorly paced narrative devoid of substantial character development and a battle system that fails to meet its full potential and I can't help but feel something important is missing, Regardless, Assassin's Creed: Origins has a lot to offer new and old fans alike - though the state of its technical performance at launch is highly questionable.