The original Demon Gaze felt like a 'right place, right time' RPG for the PlayStation Vita. Back when it released in 2014, the Vita was in stride for exclusive niche Japanese games, and new consoles like the PlayStation 4 had yet to really take off after a recent launch. Despite being a new IP in the niche dungeon crawling genre from an essentially unknown Japanese developer, Demon Gaze seemed to achieve some surprising success. Now a few years later, Demon Gaze II is here to follow up.

Demon Gaze II is set a few years after the original, and while some characters prominently return, the story of the game is largely separate. The city of Asteria is run by the lone ruler Magnastar, who is secretly sacrificing citizens to a magical furnace for unknown reasons. Two sisters, Muse and Prim, lead a revolutionary party in attempt to expose Magnastar for his crimes and bring freedom to Asteria.

Like its predecessor, Demon Gaze II is a first-person dungeon crawler. You - a silent protagonist - and a party of five explore various dungeons step-by-step, and enemies are combatted in a turn-based fashion. However, DG2 makes several significant changes to the gameplay mechanics, the largest of which is that there is no longer a class system and you no longer create your party of characters. Instead, you recruit set demon characters who you team up with as you progress through the game. 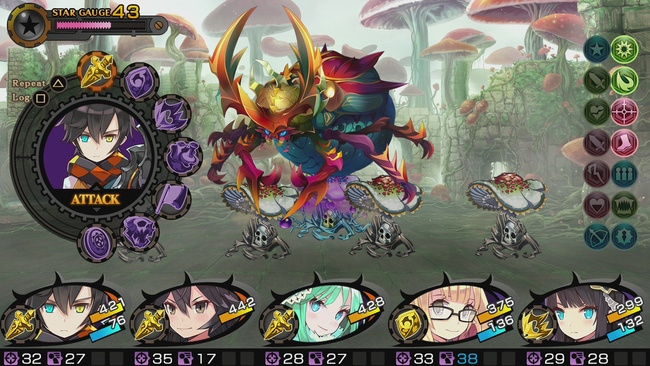 This leads Demon Gaze II to be quite considerably streamlined from the original game, and not just because you no longer have the agency in constructing your own team from scratch. In the first Demon Gaze, the demons you recruited acted as a sort of tertiary party member that acted autonomously alongside your player-controlled team. This was an interesting set up not seen often in RPGs, where the player controls most, but not all, of their team's actions, relying on an independent demon to help out. It was kinda nifty, but also frustrating, as sometimes that demon would behave in imperfect ways.

Here in the sequel, the demons are your party members, and you gain them regularly as you progress through the game. Each has a set purpose, such as Leo - who is basically a front line assassin unit, or Cygnus - a designated healer demon. With sixteen total demons to place in four party slots, each with unique abilities to offer, you still have some level of control over your party tactics but it's certainly simpler to manage this time around.

In general, Demon Gaze II has been streamlined in a few ways. The game difficulty is notably easier than its predecessor, although you have the option to ramp it up if you wish. Dungeon design also stays pretty uncomplicated the whole way through. It's also worth noting that bosses with high HP regen are much fewer and farther between this time around, which veterans of the first game will be glad to hear, I'm sure. Overall, it feels like Demon Gaze II is meant to be a bit more of an entry point into the dungeon crawling genre than most of Experience's other titles. 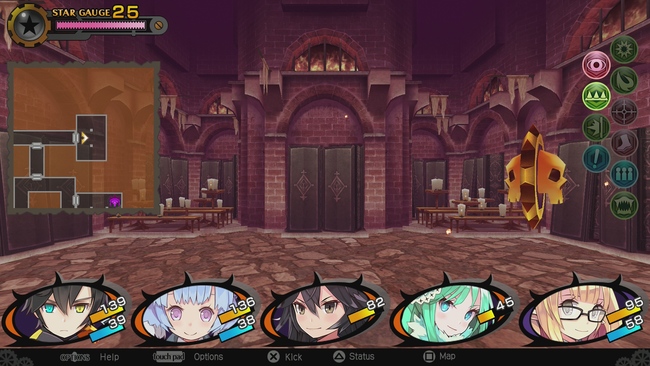 So without a class system, how does character and stat progression work this time around? Well, in addition to a typical EXP and level up system, each demon has a Favorability rating that affects what skills they can have, their stats, and even the stats the main character. You can up the Favorability by giving the demon their own room (there are only eight rooms so you have to pick and choose) or by having the demon participate in battle.

Another primary way to boost a demon's Favorability is to "perform Maintenance" on them. This is a very basic minigame where the demon's character art appears on screen, and you have to click on the art in random places to find a sweet spot. It's not as outlandish as 'rubbing minigames' that some other titles may have, but it's still pretty darn awkward to do. You can ignore it if you want.

As a demon's Favorability goes up, you can go on dates with the demons, which are really just small little scenes where the MC and the demon interact in various ways around town. Cygnus, who has been a servant all her life, learns about what it means to make actual friends. Leo - a tomboy - learns how to better interact with the MC and others. None of the date events are especially compelling, but some are mildly amusing in any case. 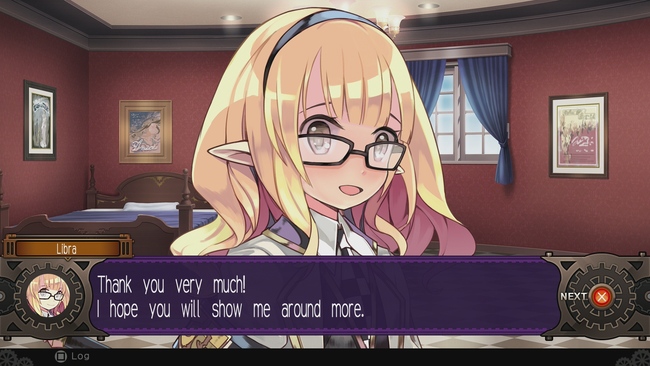 Some other aspects of Demon Gaze return for the sequel, such as the portal/gem system. While some basic equipment can be purchased at shops, in order to best outfit your demons you  must seek out portals in the dungeon. Once found, you place special gems at the portal to dictate what equipment you want to get. For example, placing a Shield Gem will allow you to get a shield after a battle. The loot is a bit randomized, so you are certain to spend some time playing the portal lottery in acquiring up-to-date gear for your team.

While some dungeon crawlers go story-lite, Demon Gaze II actually has quite a bit of dialogue and character interaction. Most of the time the story doesn't take itself too seriously, going for silliness over anything truly captivating. The few times the narrative does try to be interesting, it doesn't land all too well thanks to some melodrama and convenient resolutions, but it still works effectively enough as a vehicle to drive the gameplay.

The artstyle takes a little getting used to. It's not as incohesive as the original Demon Gaze, but there's still some mismatch between characters where some feel like they belong in different games entirely. While character portraits and UI elements have been ported to PS4 pretty cleanly, some visual organization make it clear that this was originally a Vita game, especially the big text boxes.

There's also plenty of content to find here. After the credits roll, there is a post-game dungeon & boss you still have the option to tackle. And if that's not enough, once you best the post-game boss, an Extra Scenario opens up which works as a more of a direct callback to the original title, bringing the player back to the Dragon Princess Inn. Overall you are looking at more than 50 hours of gameplay to take care everything.

Demon Gaze II deviates from its predecessor in ways that makes the game a little bit easier to get into if you not typically into dungeon crawlers. While some of the more frustrating elements of the original game have been eliminated, it also leads to a game that is somewhat more bland as a result. Still, Demon Gaze II is an otherwise effective dungeon crawler that is worth a look for both genre veterans and newcomers. 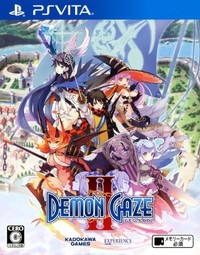