Over the last several years the localization team at XSEED has made it a mission to dig through Nihon Falcom's catalog of games to get as many titles as possible on modern PC storefronts.  Recent releases Trails in the Sky the 3rd, Xanadu Next, and Zwei: The Ilvard Insurrection each released in English roughly a decade after their original launches in Japan, to list a few. Zwei: The Arges Adventure exemplifies that notion even further, finally getting an English release more than sixteen years after its Japanese debut in 2001. It's important to keep in mind that this game is, well, old.

Zwei: The Ilvard Insurrection released just a few months ago, which is actually the sequel to The Arges Adventure. Both games are generally stand-alone stories, which is one reason why XSEED was comfortable releasing the games in a backward order. However, they are directly connected titles. In fact, if you've already played The Ilvard Insurrection, then you've already become acquainted with Pipiro and Pokkle - the main characters of The Arges Adventure. 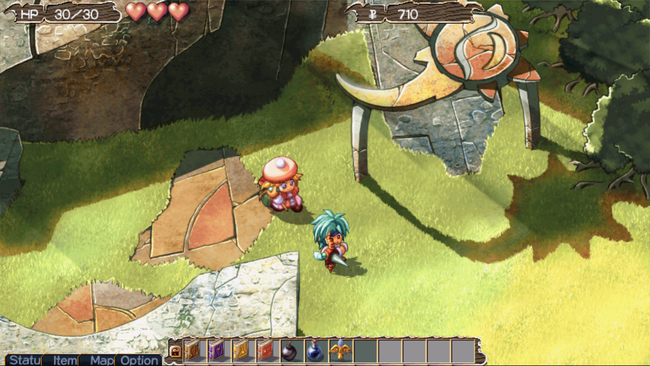 The Arges Adventures opens up in Puck Village, where Pipiro and Pokkle live a quiet and peaceful life. Things get a bit more interesting when a mysterious masked man makes an appearance and steals six holy idol figurines from the village's shrine. Pipiro and Pokkle take it upon themselves to explore the continent of Arges, find the masked man, and get their idols back.

The Ilvard Insurrection (the previously released sequel) surprised me with how well-realized its narrative elements were and how character-driven the game was overall. The Arges Adventure, on the other hand, is considerably more laid back and straightforward. The story isn't going to throw any curveballs at the player, and there isn't much there in the way of character development or captivating plot beats. It instead sticks to a more simple story progression that's easy to digest and doesn't change much from start to finish. It's not poorly written or anything like that; it just doesn't elevate to much beyond a fairytale.

The localization by XSEED is very playful in nature, with Pokkle dropping eye-rolling puns every other sentence and Pipiro cursing up a storm with colorful expressions. The plotline itself is not very serious or engaging, so having quite a number of vibrant dialogues scattered throughout worked well to keep my attention even if some lines were just plain unusual or absurd. 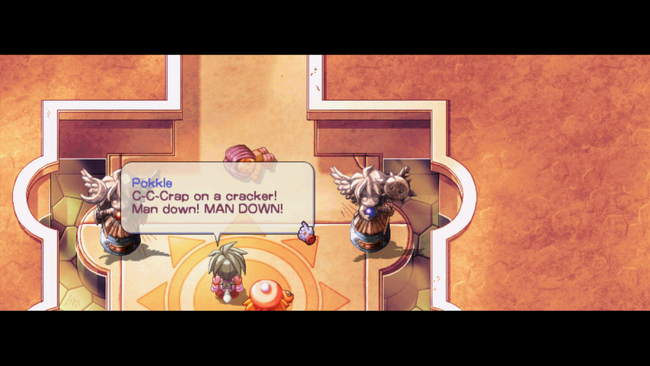 This PC release is quite basic when it comes to available settings (remember, this is essentially a 2001 game). You basically have a toggle to play in a window or at full screen. [The window is seemingly unchangeable from an 854x480 native resolution scaled up twice along each axis, while full screen caps out at 1440p, though these might be changed after the full release.] You also can choose whether or not the map and/or critical hit gauge appears in the UI. There's a slight control toggle that alters how you control switching between Pipiro and Pokkle, and that's about it.

XSEED did put in effort in modernizing the game, however. Besides things like widescreen support and trophies, XSEED added some tutorial pages you can check at any time, as well as enhanced controller support that makes it's easier to access the items on your hotbar when compared to the original Japanese release. It takes a little getting used to, but after an hour or two I felt comfortable using a standard Xbox 360 pad in playing through the entirety of the game without much hassle. I felt that it was slightly too sensitive when it came to character movement, but when you are on the move almost all the time, it's wasn't something that bothered too much. Menu/inventory navigation is easier to handle with mouse & keyboard, but still doable with a controller.

Unlike The Ilvard Insurrection, Zwei: AA is an entirely 2D game. Character sprites and enemy sprites all function on the same 2D plane, and the game is viewed from a static top-down angle. The game's color palette is very pleasing, like an earthly watercolor assortment of hues. The game's chibi-2D sprites don't always look the best though, with some characters appearing more creepy than cute.

However, the 2D nature of the game leads to some significant issues with Zwei's gameplay design. Firstly, the game's level construction is, much like the game's plot, very straightforward. The game is separated into a series of levels you can access from a world map, and most of these levels are a series of tunnel-like paths connecting larger open spaces. There are a few puzzles scattered throughout to help break things up, but they aren't much more complex than pressing buttons or pushing objects to designated spots. So while the game has various locales with a wide aesthetic array, most levels are played in the same way from start to finish, which can get a dull quickly. The Ilvard Insurrection included several optional chests with levels that required some clever puzzle mechanics in order to access, but unfortunately The Arges Adventure is considerably more streamlined in this regard, which leads to the game feeling repetitive. 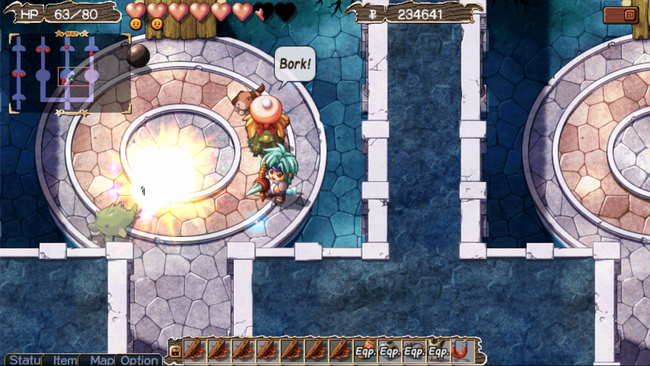 This is where some real problems start to pop up. A 2D plane with lots of tunnels and a gaggle of monsters can often get messy or claustrophobic. Adding spell effects on top of that and you often end up with a mess of visuals on your screen. I found myself mashing attack while moving around semi-randomly, hoping for the best. Exacerbating this issue is that you often will "launch" an enemy into the air, which in a 2D game is designated by the enemy sprite getting "larger" on your screen, as though they are moving towards the player's perspective. Not only does that mean the monster ends up taking more screen space as you are attacking it, but it can be confusing where exactly you are supposed to "aim" on your 2D plane in order to hit them to deal damage. You do get somewhat used to it, eventually, but battles still feel too clumsy too often.

I should mention here that the primary commodity in The Arges Adventure is food. Every normal enemy in the game can drop a certain type of food, which is not only used as a healing item, but also as the only way to gain EXP. If you collect ten of any food item, you can trade it in for a better food item, so sometimes it's best to know what food to use and what to keep.

The combat gameplay is extremely basic overall. You get one attack button - depending on whatever character you are currently controlling, Pokkle dashes towards the enemy and Pipiro launches a spell. You can either rapid fire your attack or hold the button down to deal a charge attack (under certain conditions). You eventually get various magic orbs that change the shape of Pipiro's magic attack, but you still basically just run in circles around each level mashing your one attack button until all the enemies are vanquished, regardless. The game's boss encounters, too, are simply not very interesting. It is by far most effective to just stand in front of a boss, mash A to deal damage, and press the food button when health is needed. In brief, the game's combat is ultimately a little bit clumsy and somewhat boring. It's just not fun to play. 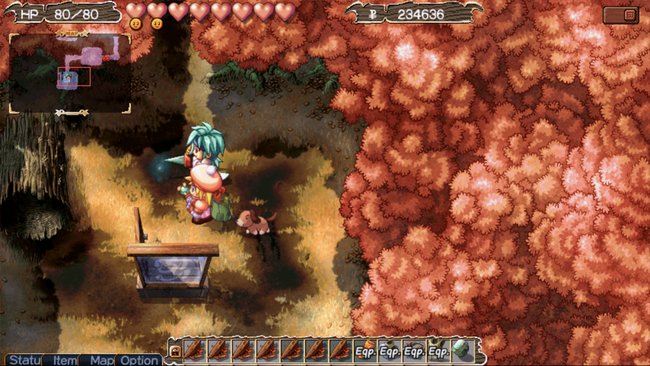 It's a shame the combat and level structure are both disappointing because the presentation, music, and localization are well done otherwise. The game even has a fair share of optional and post-game content, too, so there's a lot to keep a player occupied if that want to branch away from the main storyline a bit. There's even a typing minigame featuring everyone's favorite red-haired adventurer from a certain other Falcom series.

Zwei: The Arges Adventure is sadly not a very interesting game, but I give XSEED huge props for their dedication in finally bringing the title over to English players. At less than 20 hours in length for the main story, it's a title that might be worth checking out as a sort of curious novelty, but it's probably not going to leave any lasting impression.

Zwei: The Arges Adventure launches on January 24 for PC