Radiant Historia on the Nintendo DS is quite a remarkable game. A stand-alone RPG developed by Atlus not connected to their key franchises like Shin Megami Tensei, Persona, or Etrian Odyssey. Back in 2011, we sang praises of the game in our review. It offered something just a little bit different and original, and it hadn't been followed up on until now. In what has become typical Atlus fashion, Radiant Historia is getting an enhanced re-release with Radiant Historia: Perfect Chronology, and we were certainly eager to see the game again.

While Perfect Chronology is mostly the same game as before, there are several notable additions in this new release both in terms of presentation and gameplay content. If you want to see a rundown of what's new, you can find that here.

Radiant Historia tells the story about the continent of Vainqueur and the lengthy strife that has arisen between the lands' various nations. For many years, the land has been withering away, turning into sand, and the people of Vainqueur begin to clash over the ever-diminishing natural resources available. This strange phenomenon is referred to as desertification, and there seems to be no end in sight.

Stocke is a special agent for the nation of Alistel, working in covert operations to acquire information and perform other tasks not suited to the regular military. While working as an agent of the state, he soon finds himself with a mysterious magical book known as the White Chronicle, a tome that grants him the power to travel back and forth through time. This book allows Stocke to meet two mysterious beings in a time-less world known as Historia. These beings, Teo and Lippti, tell Stocke that the destruction of the world is, quite literally, all but inevitable. Desertification will bring the world to annihilation .. unless Stocke can rewrite and shape history in just the right way to find the one sliver of possibility that could save the world.

Throughout the game, not only must Stocke continue his duties in the drawn-out war, but he also learns more and more about the nature of Vainqueur, the desertification, and how it might be stopped. He bounces between two different timelines, known as Standard History and Alternate History, where he meets people from the continent's many civilizations while slowly unveiling the workings of the world. One of the key players in the storyline is that of Princess Eruca of the nation of Granorg, the nation Stocke and Alistel are fighting against. Eruca and Stocke's chance meeting would change both their destinies as well as that of Vainqueur.

Radiant Historia's storyline is certainly of one its strongest aspects. While it may not be the most ambitious plot, it offers a compact, well-crafted narrative that makes exceptional use of the time-travel motif without getting too complex or overbearing. It's actually quite remarkable how well time-jumping is handled to give the story a unique take while using a plot device that often leads to confounding messes in other fiction. Coupled with a likable cast of characters, an imminent threat of danger, and mystery to solve, I found myself hooked on learning 'what happens next'.

When it comes to what is 'new' in this enhanced re-release, the most notable addition is that of the Possible History content, which centers around a new character, Nemesia. She is a historian and she also has time travel powers much like Stocke, and she enlists his help to prevent the world's impending desertification. Unlike the Standard and Alternate timelines, Possible History is not a single connected timeline. Instead, these "Possible Histories" work as small segmented scenarios, featuring familiar-yet-different people and places. Throughout the game, Nemesia sends Stocke out to several various "Possible Histories", in which Stock must reclaim an Artifact from each to return them to Nemesia.

If you are wondering how well this new Possible History content meshes with the original game, the quick answer to that is that, well, most of it doesn't. Nemesia's storyline additions don't actually intersect with the main game much at all - at least not until the very end. How it basically works is that after major events in the storyline, such as chapter breaks, Nemesia will find more Possible Histories to send Stocke to, which you can choose to complete at that point or save until later. They essentially work as a sort of quest list, and completing these quests rewards you with money, skills, or occasionally equipment.

I wasn't quite sure what to expect with this new content, but ultimately, I came away disappointed in most of it. The short of it is that that the majority of Possible Timeline scenarios are simply uninteresting, both in a narrative and mechanical sense. Nemesia sends Stocke on many of these mini-quests, more than 25 in total, and they all essentially boil down to one of two types. The first of these is simply an extra boss fight - usually a recycled enemy from the main game with perhaps a small twist in their setup or ability. The other type of possible scenario is that Stocke hits a roadblock and needs to talk to a character in one of the other timelines to proceed. The game gives the player a pretty obvious hint who to talk to, so you quickly jump to that point in time, talk to the heavily-hinted person to grab a key item, and warp back seconds later to complete the scenario.

Every one of these scenarios works in one of these two ways, with a single exception. A scant few combine these two structures and ask you to get an item AND follow it up with a boss fight, but even still, they quickly become just an exercise in completionism rather than anything engaging. On top of that, as the what-if possible scenario isn't actually related to the main storyline, it's hard to muster any enthusiasm for what happens within. The scenarios lack allure to make it anything more than a checklist to complete.

However, completing these scenarios does result in significant changes regarding the conclusion of the game. The original Radiant Historia did not really have a bittersweet ending, but it did leave a couple lingering plot threads open to interpretation. Most notably, the underlying cause of the world's problems was not fully detailed, essentially ending the original game on a theme of hope in which the cast could work towards a better future. The immediate danger was resolved but the overall conflict remained - anyone who has played Radiant Historia should be aware of what I am referring to.

Perfect Chronology's new story content essentially (eventually) decides to do one key thing: give more details and backstory to the underlying desertification. It's a bit difficult to describe without spoiling elements of the game's narrative, but the new content ultimately allows the cast to obtain a more complete solution to the desertification problem than what was achieved in the original game. The new ending is a happier, more settled conclusion. It's still mostly satisfying, but it still feels largely tacked on and unnecessary. If you so desire, you can decide to play the game as it was originally, if you choose to.

As for the actual 'game' part of this game, it's largely unchanged from before. Radiant Historia uses a typical turn-based battle system with a couple of unique twists. Firstly, the enemies are positioned on a 3x3 grid, and a large part of your battle strategy revolves around manipulating enemy position to deal the most damage from your attacks.

For example, you can opt to spend turns 'bunching up' the enemies onto a single spot, and then hit them all at once with powerful magic abilities. One of the playable characters, Aht, can leave traps on the battlefield, which you can then knock foes into to deal high damage numbers.

The other unique element of Radiant Historia's battle system is that you can adjust your own turn order to whatever you choose. While you cannot get rid of turns entirely, they can be rearranged so that you can set up attack chains to your liking. Changing up the turn order does come with a penalty of lowering your defenses, though, so you have to be a bit thoughtful in how and when you do it.

New to Perfect Chronology are Support Attacks, where reserve members can jump in to offer a small attack or bonus.
Advertisement. Keep scrolling for more

Radiant Historia's battle system is pretty fluid and fun, but it can fall into a trap where several battles carry out very similarly from one to the next when you find a strategy or two that work. While each character plays differently from the rest, and you can create a variety of different types of combos, you don't really need to in order to find success. Radiant Historia was not a challenging game, after all, so at times it felt like the combat wasn't reaching its potential in the original version.

One key addition to Perfect Chronology is that of difficulty levels. If you thought the original game was a little too straightforward, try knocking up the toggle to Hard mode. In this difficulty mode, things like stat buffs and status effects become far more crucial to consider, and lining up long chain attacks is not quite as trivial as before. Support attacks can become especially useful on the higher difficulty levels, though what the characters decide to do is random. It's certainly a welcome addition and really tests if the player knows their way around the combat system. You can always toggle the difficulty. back down to normal at any time, too.

There's also a new Friendly mode, which allows the player to skip battles entirely by hitting the enemy on the field beforehand. You still get all the EXP and items you normally would without having to actually perform any combat. However, once you are set to Friendly mode, you can't go back to one of the other difficulties.

The jump from DS to 3DS comes with plenty of other nice additions too. The character art has been redone in a style which, while considerably different than the original, still complements the tone of the game. Equipment management is a little easier to handle this time around, being able to manage characters currently not in the party. The inclusion of a mini-map makes traversing the various locations a tad less tedious, and a new status menu in battle makes managing buffs a little easier too. The larger screen size and resolution also simply gives the user interface a little bit of room to breathe, as well.

The game's newly added English voice acting is also a treat. For the most part, the performances are well done although inevitably not every character sounds exactly as I imagined. Stocke's voice actor is especially impressive, bringing life to several key moments in the game. If you want to play the game as it was before, you can turn the voices off if you'd like.

Whether or not Radiant Historia needed a re-release, and even if the new story content is a bit superfluous, the core of the game is as wonderful as it was before. Several quality-of-life tweaks simply make a good game better, and whether you're playing for the first time or just want to revisit a favorite, Perfect Chronology is worth picking up. 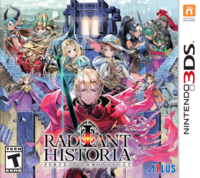