Nepenthe is strange. It’s a strange game to play, with a strange but successful Kickstarter campaign. The creation of one man with a bunch of watercolor pencils and a dream, it’s truly a difficult game to describe. It feels like playing through a child’s idea for an RPG, with all the whimsy and confusion that comes with it. If anything, Nepenthe is a testament to the creativity the budding indie market allows to grow within it, even if that creativity comes at a cost of playability. 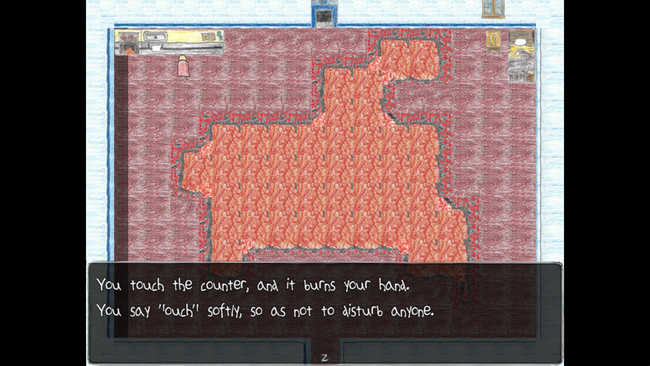 In Nepenthe, you play as a man that has lost his memories. Thankfully, a helpful note tells the man his name… as he’s promptly eaten by a monster. What follows is a strange adventure in trying to get this letter to the one that can save the world from an ancient evil. The story is nothing particularly groundbreaking, but Nepenthe stands out more for its unusual presentation. The plot both takes itself seriously & makes a joke of itself, and doesn’t overstay its welcome with silly things like exposition.

The art style helps a lot in portraying this strange style. It’s all hand-drawn, but not exactly in a masterful way--whether the child-like style is on purpose or simply a result of the resources that Yitz had at his disposal, it works well with Nepenthe. The way the plot is handled coupled with art style make Nepenthe almost feel like a fever dream, and if anything else it’s an interesting enough game to experience.

In terms of gameplay, it all depends on the mode you choose. The default mode is Adventure Mode, and battles more or less play out like a mini shoot-em-up, much like Undertale. Nepenthe in Adventure Mode can get hard, but it’s rarely unfair, and gives a decent challenge throughout. But, if you’re not a big fan of the Undertale battle system, you can do Story Mode instead, which turns the game into a very simple turn based RPG. So simple, in fact, that you’ll probably never have to use items or heal. It’s a good idea to play Adventure Mode the first time through, and opt to the Story Mode to obtain all three of the game’s endings. 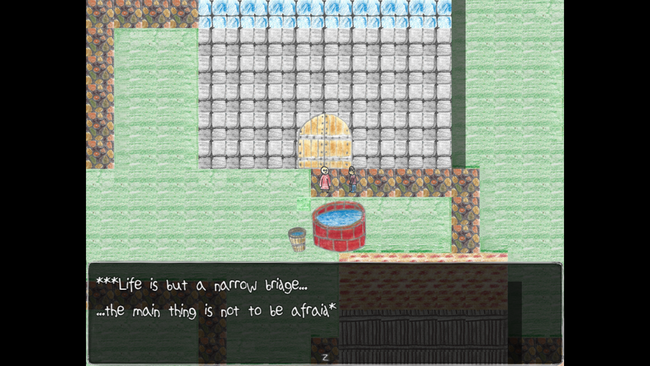 What really became an issue with Nepenthe, though, were bugs and other updates. While exploring, I came across a mysterious area in the woods, but upon talking to the person there, I kept getting error messages that I originally thought were a joke, but was an actual issue that I had to force quit out of game to fix. Additionally, when playing through on Story Mode, a particular battle still played as though I had played Adventure Mode. Of course, given the nature of Nepenthe, it can be difficult to tell what’s even a bug in the first place, and what is an intentional “feature”.

When trying to review Nepenthe, though, by far the hardest thing to take into account is that the developer is still actively working on the game, adding new features at a breakneck speed. Since I began playing the game for review, the developer added a new Mercy Mode, wherein you don’t have to kill your foes. However, you still cannot choose Mercy for every foe yet, although it’s being worked on. 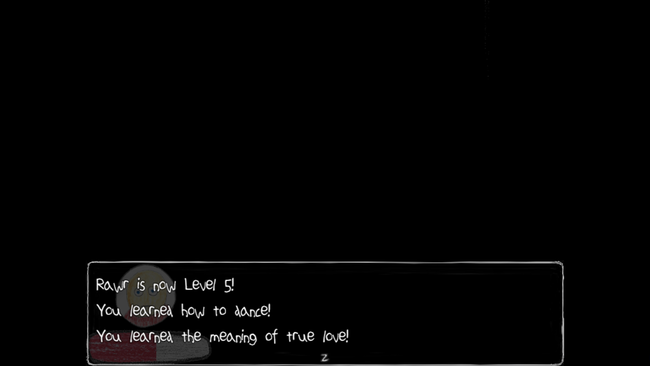 The addition of dramatically different features and the bugs in Nepenthe makes it almost feel like the title should be in Early Access--because if someone were to buy and beat it today, they may be missing out on an entirely new experience a month or two from now. I cannot fault the developer for passionately updating his dream game, if anything Nepenthe’s oddness comes from the fact that Yitz is doing exactly what he wants with the game.

At the end of the day, Nepenthe is charming enough to invest an hour or two playing it and just experiencing its strangeness. It’s doesn’t feel quite complete in places and is far from perfect, but it has moxy, and moxy is what is going to entertain you some weekend afternoon in the future.