When The Bard's Tale IV: Barrows Deep released this past September, we at RPG Site didn't actually get a chance to review it at launch. Our staff was busy covering other titles like Dragon Quest XI, Valkyria Chronicles 4, Torna: The Golden Country, and Pathfinder: Kingmaker, and unfortunately we simply couldn't get around to Bard's Tale right away. That might have been for the best, because by all accounts the game's launch was rough, but InXile has continued to iron it out since.

The Bard's Tale is a classic first-person role-playing series, originally developed by Interplay back in the late 1980s. The Bard's Tale IV: Barrows Deep, then, is a return to the series from Brian Fargo, the former founder of Interplay and current CEO of InXile. I personally am not familiar first-hand with the original series, so I cannot speak much to how Barrows Deep incorporates elements from its history. While I have played Japanese dungeon crawlers like Etrian Odyssey and Elminage, The Bard's Tale IV was my first foray into a western game of this style.

Before I say anything else, I want to emphasize that The Bard's Tale IV is not a game driven by its storyline or by its characters. In fact, while the game will give the player pre-written characters to use in battle, you can change these out for player-created units if you choose. At its core, the game uses a race/class system that doesn't stray too far away from the expected -- there are four classes to choose from: Bard, Fighter, Rogue, and Practioner. Your unit abilities are derived from their class and their race, of course. It's a tried-and-true system.

Combat itself is where Barrows Deep especially shines. Now, I know that describing the ins and outs of battle mechanics may not be all too interesting for a review, but give me a chance here to explain why it's such an interesting system. In brief, it's a round-based system on a 4x4 grid. Your team of characters occupies one half of the grid while the opponent sits on the other half, and each party takes turns in phases.

So, it works like most dungeon crawler systems, except positioning now becomes a major factor at all times. Most skills can only hit enemies within a certain range, and so you'll be spending considerable time in battle moving characters around to make sure they can dish out damage effectively - or perhaps shielded well if they are on the verge of death. Position alone makes battle management a lot less rote than it would be in other games, as dynamic battle placements become a key element to each encounter.

How actions are taken in this system is given an interesting twist also. Rather than each character acting once per round as in most RPGs like this, your team at whole is given a shared action pool that all actions expend called 'Opportunity'. You start out with 4 Opportunity per round, and the pool grows as you progress through the game. Sometimes it might make sense for a certain unit to not act at all in for a time -- a specific unit might be so effective against certain enemy groups that using up all 4 Opportunity on their own during a round can end up being the best strategy.

How I look at this is that the game is giving the player more freedom in how they choose to approach combat. Rather than just picking a unit's action once per turn, every turn, and smashing some AutoBattle feature, you instead are given more input which unit actions give you the best chance to win. That might mean you end up using certain characters much more than others, but it all comes down to your party set up and strategy.

There's a limit here, though. Most skills from any character can only be used once per round, at best. So you can't just spam your strongest abilities over and over, you have to balance out which abilities you want to use in order to make each turn as efficiently as possible. Do you use a strong attack to take out a squishy mage foe or do you use it to knock a significant amount of health from a tank unit? Some abilities do have cooldowns that take multiple rounds to recover, too, adding another element for players to keep track of.

There's yet another facet to all of this I haven't mentioned at all yet, and that is magic skills. Importantly, these abilities do not spend from the Opportunity pool. Instead, magical abilities are spent from a more traditional mana pool for each character, called Spell Points. SP start at 0 at the onset of each battle and then accumulate afterwards through various means, such as activating certain skills or through passive bonuses. This means that magic abilities and physical skills are spent from two different types of pools, and knowing how to best manage both pools at the same time is absolutely crucial to succeeding against some of the more difficult battle encounters.

So, what that all amounts to is how a selection of unit skills from their class tree, positioning of units on the battlefield, use of Opportunity each round, and management of SP each battle, all come together to create a compelling, flexible battle system that hooked me. There's enough moving parts here that, yes, you'll eventually find strategies or patterns that might be a little too effective, but the satisfaction of putting together a team that trounces most foes is still quite addicting.

While combat is a key component and the highlight of The Bard's Tale IV, it's worth bringing special attention to the game's use of environmental puzzles. In fact, this game is as much of a first-person puzzle game as it is an RPG.

Put simply, The Bard's Tale IV is way more puzzle-focused than I would have ever imagined it would be. From expected block-pushing to sliding puzzles, gear puzzles, line puzzles, and the like, you'll be spending a significant amount of time in every region of the game completing these puzzles to proceed. There are even moments where you'll have to solve 3 or 4 puzzles in a row to continue on, and you might find yourself doing that for 15-30 minutes in between battles, depending on how fast you can solve them, of course.

I personally didn't mind the heavy use of puzzles, but I was still surprised at just how many were thrown at me, and it's definitely a significant portion of the gameplay loop. The final dungeon in the game is basically one giant puzzle, as an example. If that style of gameplay isn't your thing, honestly, you should probably stay away from Barrow's Deep.

One place where Barrows Deep strongly falters is in the story it tries to tell. Starting out, some of the characters that join your party have no clear motivations to do so; they just get added to your party because the game needs to fill your roster somehow. Character interaction is also a rarity. While characters will occasionally banter with each other as you explore the game world, it's usually superfluous chatter that doesn't have anything interesting to say. Really, they are mostly just units acting as tools for the player in battle more than anything else.

For the first 2-3 hours of the game, I tried to immerse myself in the world lore. I exhausted dialogue options, and I tried to keep track of the histories and characters that were brought up in dialogue. But I quickly came to the realization that I really just couldn't bring myself to care about any of it. I just wanted someone to point me in a direction so I could explore more and fight battles. I was enjoying the combat elements enough that dialogue sequences actually became more of an interrupting nuisance than anything actually driving the game forward. Barrows Deep is a game for mechanics nerds first and foremost.

I do want to bring special attention to the game's soundtrack. Most of the tracks were created by Scottish musician Ged Grimes, and many carry a Celtic style that matches the game's various regions. This includes several Gaelic vocal tracks that are nothing short of enchanting. It works to give Barrows Deep a very specific tonality that's not seen often anywhere else. Sometimes I would find myself loitering in the Adventurer's Guild just to listen to whatever song the local Bard would be singing while I adjusted my party set up.

Sadly, while InXile has been working to improve the game from its launch state, there are still several issues to be ironed out. I've gotten stuck on the environment more than once, the minimap will often display icons in the wrong places, and I had a few outright crashes with my 40 hours in the game. InXile has also made a couple key additions to the game that are great options to have, such as the ability to respec characters, save anywhere, and even use a grid system in order to emulate the classic Bard's Tale trilogy. There's still work to be done here, but it looks like InXile is eager to polish up the game where they can.

The Bard's Tale IV: Barrows Deep has a satisfyingly deep and flexible battle system, surrounded by heavy puzzle exploration and a narrative that doesn't manage to stay interesting. There are some really neat systems at play here for those looking for intricate combat, but performance issues and a lacking storyline make it a hard sell to a larger audience. 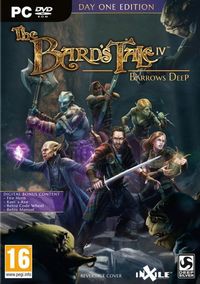