The Middle Ages were not easy on France. When the people weren’t contending with the pestilence of the Black Plague, they were fleeing as English armies reduced villages to a cinder. Most wouldn’t set a familial love story in the midst of all this, but hope treading water in a sea of nihilism is exactly what A Plague Tale: Innocence sets out to do.

“Hugo! It’s me, your sister, Amicia,” a girl says. “Hello,” a boy timidly replies. The sound of doors being kicked in can be heard in the distance. “Bring me the boy alive!” shouts a soldier. There’s no time for introductions, the siblings have to leave their home behind.

The invaders are called the Inquisition, a militarized sect of the Catholic Church. They’ve been watching on Hugo for reasons unbeknownst to the player, fully prepared to burn banners and slaughter those that might come between them and the boy. Such is the fate of the siblings’ parents after trying to protect their son from the Church. This forces Amicia to double as a sister and surrogate mother for Hugo from there on out. Babysitting is tough enough without all the inquisitors, warring nations, and ravenous plague-carrying rats added to the mix; she’s been dealt a hand that’s just a tad unfair.

You’ll know just how bleak the story is by the time Amicia is forced to lead Hugo over mounds of corpses left over from a battle between English and French armies. The Inquisition is hot on their trail, so going around the battlefield is out of the question. Not to mention the rats skitter about the battlefield, stripping the meat off the bones of the dead. It doesn’t matter which path Amicia and Hugo take; death won't be far behind.

Even when climbing over bodies, pushing corpses deep into the mud with each step, the two never let go of each other. No matter how the putrid sight or the way nihilism seems to cling to the air, love shines through. It has to, otherwise, this story would be tough to stomach. Amicia has to keep Hugo safe while simultaneously getting to know her brother. She doesn’t always say the right things, but no one should expect her to because she’s still just a kid herself. Building trust takes time and effort, one step at a time.

Unfortunately, there are moments where the story suffers due to stiff animation work. There was one moment when a character deadpan stares directly into the camera, their face completely indiscernible, making it impossible to grasp what’s going on in their head It’s hard not to chuckle at the stilted marionette posturing when the game is genuinely trying to elicit an emotional reaction. So, if you go into this expecting the subtle facial animations found in a Naughty Dog title, you’ll be disappointed. It’s a shame because the ventriloquist dummy-like movements bring down even the most well acted and thoughtfully written scenes in the game.

Amicia and Hugo’s bond weaves itself into the gameplay, as well. Being children, the two of them are ill-suited to take on armored soldiers in a head-on engagement (try it and you’ll die instantly). Vulnerability isn’t just set dressing for the narrative, it’s replicated across mechanical systems as well.

Thus, it’s a smidge better to opt for the sneaky approach. If you’ve played any stealth game in the past 15 years, you’ll know the basics here. Human enemies patrol around fixed paths, there are conveniently placed patches long grass for you to hide in, rocks can be thrown to cause a commotion and distract guards, you get the gist. When you’re facing off against human enemies, it feels like you’re just going through the motions.

However, the interplay between light, darkness, and how the two spectrums of light affect rat behavior is where the gameplay gets interesting. Darkness is usually your ally in these sorts of games, but this time, the light is equally viable at keeping you safe. Amicia and Hugo need to stay out of the Inquisition’s sight without wandering off into a dark sea of beady eyes. Early in the game, Amicia and Hugo are stuck in a crypt being hunted by the Inquisition, with rats pouring out of every hole in the wall. Amicia spots a soldier patrolling about with a lantern in hand to keep the rodents at bay. She loads her sling with a rock, aims at the lantern, and fires. The lantern shatters, extinguishing the candle within. Suddenly, the soldier has no protection from the dark, allowing the rats to drown him in a whirlpool of filth. However, the siblings aren’t safe yet, as that was hardly enough to satiate the appetite of the swarm. Amicia lights a torch, waving it to and fro to keep the rodents at a distance until she and Hugo are safe across the room. Hugo holds his sister tight the entire time. The flow between cutscenes and gameplay is handled with such grace that it's easy to forget you’re the one piloting Amicia through the whole ordeal.

Hugo can be issued commands to make things easier during the more difficult segments. Most of the time it’s just simple ‘stop’ or ‘follow me’ orders, but his participation is more elaborate during puzzles. Motion to a lever and he’ll pull it, allowing Amicia to cross a drawbridge and to pull a level on the opposite side so he can in turn cross as well. There might be a hole in the wall only a child can fit through, so a nudge will coax him through to open a locked door from the other side. As you work through these puzzles, the two of them will sort through their own baggage.“Did mother practice her alchemy on you?” Amicia inquiries. “She gave me medicine for the headaches,” admits Hugo. Inhibitions fade they learn to work together and build trust. Tragic team building exercises, if you will.All of this isn’t a decorative veneer for an escort mission either, nor does the game cheat by making Hugo invulnerable or invisible to enemies. He’s as susceptible to danger as Amicia is, the duo needs to be cognizant of their surroundings at all times.

No matter how fine the weave between narrative and gameplay, A Plague Tale has some glitchy moments that’ll take you out of it. One time, Hugo flew off into the sky as if his home planet needed him, and I had to reload my save. Rats decide that they suddenly aren’t afraid of the light and proceed to turn Amicia into mulch. These are rare occurrences, but be aware that some buggy nonsense is likely to ensue.

If there’s one aspect of A Plague Tale I could do without, it would be the progression and crafting system. Do dats are sprinkled throughout environments that serve as crafting materials for alchemic potions and ammo types. Hold the x-button and watch the meter fill, and viola, you now have flaming rocks to toss. Riveting stuff. I get that the developers wanted to add a ‘survival’ tinge through finite resources but materials are so plentiful that not once was I completely out of any given ammo type. It’s aggravating to watch the story be interrupted by a workbench you’ve seen in a million other games when it isn’t necessary. Amicia could’ve easily found a satchel out in the world that expands her inventory but instead, here we are holding the x-button, watching meters fill a progress bar like a dullard. So often progression systems are railroaded in as a hook and it’s a shame to see A Plague Tale not buck the trend. It’s a gamey aspect of a game that’s otherwise pretty good at masking that sort of thing.

A Plague Tale: Innocence doesn’t nail everything, but it still manages to pull off the things it absolutely needed to succeed. For every clunky stealth section or awkward animation, there’s a heartfelt interaction between Amicia and Hugo. It’s a story about the inevitable end of all things and how tragedy makes people long for a time before innocence is stripped away. Amicia didn’t ask to become Hugo’s guardian--that’s just the way life panned out. Much as she would like to shield him from the brutality of their circumstances, it’s not possible if they want to survive. Innocence is akin to fire; neither lasts forever and, eventually, every flame fizzles out. However, if we stick with the people we love, it’ll burn for as long as we need it to. 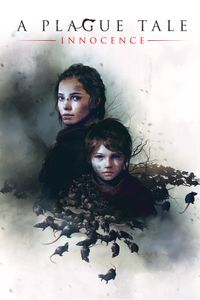