It’s fair to say that 2015’s Until Dawn came out of nowhere for a lot of people. Originally a lost PlayStation Move title, Supermassive Games’ horror adventure garnered good critical and commercial reception and ended up being one of Sony’s must-play exclusives thanks to its relatable characters, diverse choices, and horror elements.

Now the British developers aim to make lightning strike twice for all platforms with the first in the Dark Pictures Anthology: Man of Medan. Does it live up to the legacy that Until Dawn left behind?

Right from the get-go, Man of Medan wears its Until Dawn inspirations unabashedly. An introduction which soon turns south, a character who overviews and explains your choices, and even a rendition of ‘O Death’ are all very clear callbacks to the studio’s previous hit. For fans of that game it’s a lovely touch and really shows how beloved the title is for the studio.

Man of Medan features five twenty-somethings stranded on a shipwreck with a pirate crew, when they suddenly find themselves at the mercy of something more deadly. Going into any more detail than this would spoil the plot and its twists, but there’s much more going on than you may initially think, making any playthrough after the first massively different.

Although the story the game tells is gripping in its own way, it’s fair to say that Man of Medan is all held together by its characters. Despite having some of the tropes you’d come to expect (the joker, the serious one, the nerd), all of the characters are incredibly likable right from the start. Shawn Ashmore’s performance as Conrad is particularly great thanks to his lighthearted delivery, but all of the main cast members are great enough that it makes every accidental character death legitimately sad.

Interestingly, Man of Medan doesn’t try and glorify the main characters too much. All of them have some pretty major character flaws and it makes them intensely relatable, similarly to Until Dawn. This time it isn’t played up for laughs as much, which I think is actually a bit more effective. This is represented by the return of the character relationships and traits mechanic, which is continuously updated as you make decisions. This is one of the best-returning features, especially when it exposes the characters' relatability.

Gameplay is kept almost completely identical to Until Dawn, which isn't a bad thing. You’ll still be walking around environments, interacting with items, battling quick time events and using the right stick to select dialogue options, but with the benefit of motion controls being removed. Having everything play the same is great thanks to its ease of use, but it does mean the problems of getting stuck in the environment make an annoying return as well.

What keeps the whole experience fresh is the number of choices you can make, and how they impact the game. As a ‘choose-your-own-adventure’ type of game, this is really what carries the whole experience. At a reasonable 6 hours for my first playthrough, being able to replay and branch into as many paths as possible is a big feature. Replaying the game and trying to choose the opposite choices to my first revealed that the choices aren't an illusion, and there really is a lot that can, or can not, happen.

Thankfully Man of Medan entirely succeeds in delivering the promise of player choice. Even in the first hour, there are numerous big decisions to make and ways to shape your characters that replays can be very entertaining in seeing the options you didn't witness the first time through. Of course, not everything can be done differently, but there’s certainly a lot of variation to be found. There are some character moments that betray the emphasis on player choice, with some events in the story occurring in places whether you input on them or not. Put bluntly, there is some typical horror protagonist stupidity that needs to be there to drive the plotline forward and that can be frustrating, even if it is on purpose.

There are a few seemingly significant options sprinkled throughout that straight up don’t matter, which feels a little cheap. One moment had me choose to have my character hide instead of run, only to end up running away upon completing the quick-time event. Another had me purposefully fail one of the new ‘keep calm’  QTE's only to see the same thing happen to my characters as if I’d done it successfully. The number of moments that matter certainly outweigh the ones that don’t, but it can be frustrating to have time wasted, especially with the inability to skip dialogue.

But how scary is it? A horror game has one main thing it needs to deliver on and that’s the scares. Thankfully, Man of Medan is effective in doing so with some genuinely unnerving scenes and some great moments of building tension. Camera angles are especially good at creating an unnerving atmosphere, in a manner very reminiscent of the original Resident Evil. It does tend to rely on jump scares but Supermassive have otherwise done a good job at making good scares, even when playing the game more than once.

One of the most rewarding aspects of Man of Medan that is also carried over from Until Dawn is how characters can live or die throughout the story, depending on your choices. In my original playthrough, I aimed to save everyone but despite my best efforts, two of the main characters ended up dead, which really sold it for me. Death happens in cleverer ways than you’d expect and it’s something that makes the first playthrough in particular quite exciting. Knowing how it all plays out makes subsequent playthroughs a lot easier, but there’s still a lot to be said about the feature, and you can't expect that to save all of your characters.

Presentation is another high point for Man of Medan. Character animations are very well-detailed, environments are fantastically designed and lit and the sound is fantastic across the board. A lot of what makes the game scary to play is down to how fantastically almost all elements of the presentation are done. Unfortunately, I found The Curator to be a little underused than he could have been. It speaks to Pip Torrens’ performance that I wanted to see more of him, but it feels like he’s only really just beginning to show what he can do, especially if he appears in other games in the anthology.

You might have noticed Until Dawn is mentioned a lot in this review, and that’s nigh unavoidable with Man of Medan. The similarities between the two feel entirely purposeful, but the gameplay similarities can make it feel like it lacks that little bit of originality. How much this bothers you will depend on what you thought of Until Dawn.

One aspect completely new element to Man of Medan, however, is its multiplayer modes. Shared Story mode allows you and one friend to work alongside each other, switching between characters and experiencing the story almost beat for beat together, whereas Movie Night has you passing the controller from player to player as the characters switch around. Having tried Movie Mode, I found it to be good fun but fairly standard, whilst Shared Story mode is clearly where you'll get the most fun out of the multiplayer.

Your mileage for multiplayer will come from who and how you decide to play it. Any one friend can decide to mess things up for everyone else, but that's really the fun of it all. The multiplayer functions tie fantastically into the game's death system and it does add another layer to the game.

Unfortunately, my biggest complaint about Man of Medan is the technical issues. Stuttering happens frequently, textures take some time to pop in and audio can get caught on itself or repeats. Although none of these issues are deal-breakers, they can make replaying the game a bit more annoying than it should be. Hopefully patches will help iron out some of the more aggravating problems.

Despite these technical issues and occasional let-downs with the choice mechanic, Man of Medan represents a bright start for the Dark Pictures Anthology. It delivers almost exactly the same great stuff that Until Dawn did, although it does suffer from sticking to the formula a bit too much. With some polish and further innovation, the rest of the Dark Picture Anthology could be even better than what it follows on from.

The Dark Pictures: Man of Medan 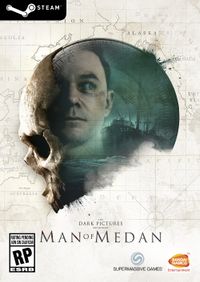