When The Surge released in 2017, the phrase I kept hearing was that it was "better than expected". That's not exactly the highest of praise, but now having played the game myself since then, you could call it a well-conceived action RPG with some rough spots that could be ironed out in a sequel. The developers at Deck13 must have had that very same thought, as they immediately went to work on The Surge 2, hoping the build off the foundation laid in the franchise debut.

Unlike in its predecessor, which put players in the role of pre-set protagonist Warren, The Surge 2 opens up with a character creator. It's not especially in-depth, but you can create a man or woman with a handful of skin tones, hairstyles, and other characteristics for your upcoming trip to Jericho City. You can also set a personal background history for your character, which seems to change some minor dialogue in some quests. However, unlike Warren, your character will never speak aloud when you select various dialogue choices.

However you create yourself, the game opens up on a flight to Jericho City, when something goes horribly wrong. You soon wake up in a detention center's medical unit, unsure how you got there. Inmates are wrecking the place and medical drones have gone haywire, so you pick up a pair of defibrillators and begin to punch your way to some answers.

The Surge's main gameplay gimmick is how you dismember the arms and legs of your opponents to remove their gear and claim it for yourself. Every enemy you face in the game has individual components of their body you can target in real-time using the right analog stick, and when enough damage is dealt, you can perform a finishing move at the press of a button to eliminate the enemy and gain a piece of loot. In fact, one unique element to The Surge games is that loot you gain is almost entirely determined by how you finish off foes rather than any sort of random chance. Chopping off arms will reward you in gear to upgrade arm modules, decapitation will give you pieces needed to upgrade headgear, etc.

There are a number of small usability improvements made throughout The Surge 2 when compared to its predecessor. Each enemy now is clearly labeled with a number from 1-10, indicating the level of gear that they wield. Each extremity is also more clearly marked by an icon indicating how much damage it has taken. These things are useful to know at a glance before dismembering, so you can easily see what rank of loot that will be dropped upon defeat. Additionally, higher-level loot can be broken down into lower-level loot, which is very convenient if you wanted to power up another piece of equipment without having to track down enemies with the specific rank of components you need. Just collect some high loot and break up the pieces as needed.

The energy bar - primarily used to perform finishing moves - now drains in timed individual segments rather than in a continuous meter decay. This might sound like mere semantics, but it makes it easier to track your current energy level without it feeling like a constant battle of tug-of-war to maintain it. Build up enough energy to fill a segment and you can 'hold onto it' for a bit before it flashes away. It's a small but definitely appreciated tweak, especially considering how fundamental energy is as you are constantly ripping the arms and legs off of your foes.

One considerable change for the better is that weapon-type proficiency has been removed completely. In the first The Surge, the more you used a certain type of weapon, the more damage you would inflict when using that weapon type as shown by a proficiency level. What this mechanic unfortunately led to is that, ideally, you would never change up your weapon type from the start of the game in order to maximize your proficiency and thus your damage dealt. For example, if you wanted to change things up and try a spear instead of a one-handed weapon, you'd suddenly find yourself significantly weaker due to your lowered weapon proficiency. Because proficiency is a thing-of-the-past, you can now more freely change up your weapon types to try out different combat styles. This seemed like an obvious change to make, but I'm glad Deck13 went through with it.

Another tweak made in The Surge 2 is how your main three meters - health, stamina, and energy - increase as you progress through the game. In the first game, these meters were determined nearly entirely on your gear and implants rather than any sort of inherent stat. As you gained levels, you didn't gain stats but instead increased capacity to equip more and better gear to raise these meters along with your damage and defense. In The Surge 2, you gain points to allocate to these three meters upon level up, making it a slightly more standard method of mechanical character progression. I didn't absolutely hate this change, and it's not like this new system doesn't work as intended, but I can't help but feel it comes at the cost of a bit of uniqueness, changing up one of The Surge's identifiable quirks and partially replacing it with a more typical and well-worn point dump .

In looking at the larger picture, the overall structure of The Surge 2's environments is considerably more open compared to the original game. In The Surge, you spent most of your time within a singular CREO facility, going from room to room in often-cramped spaces while progressing towards the game's conclusion. With the sequel set in Jericho City, you are now traversing a less claustrophobic world. It still features a similar gameplay loop, where different regions will become accessible as you progress, with finding shortcuts acting a key way to connect the world and speed up traversal. It's also a little bit less linear than before, where some events can be tackled in different orders.

While most of the places you'll travel are urban, one of the game's regions is more like a forest or national park, offering a little bit of environmental variety to what as otherwise been somewhat stale settings with the two Surge games. Of the adjustments made, world traversal is probably The Surge 2's largest singular improvement. No more mazing around vents or anything like that.

A mid-game event does shake up the world design to a considerable extent, changing the way you have to navigate around Jericho City. Without spoiling anything specific, things do become more dangerous and less open. It's perhaps not as fun to travel as the world before this event, but it works well as an indicator for the increased stakes.

While The Surge had a few sidequests, they were fairly sparse and not directly treated as marked quests within the game. The Surge 2 formalizes things a little bit more with a proper section for quests within the game's menus. These aren't too interesting to be frank; they are the type of quests you might expect: finding a certain item within a certain section, taking down certain enemies you might run into, things like that.

Out of all the little mechanical changes made in this sequel, the most significant one, which effectively changes the complexion of combat completely, is the addition of directional blocking. It's functionally as simple as it sounds: instead of just have a standard block button to reduce damage at the expense of stamina, now you can time your blocks left, right, up, or down to deflect enemy attacks and possibly open up a chance to counter. While I found myself fond of this new element at first, I quickly came to realize just how much combat now revolved around it, and I began to sour on its implementation.

The best way to describe my issue with this new blocking system is to describe how the game uses it in boss encounters. Put bluntly, the single most disappointing element to The Surge 2 are these boss encounters, for a number of reasons.

Besides an early tutorial boss, the first major fight of the game faces you off against a gigantic spider-like mech in a large arena. This guy could swipe its long tentacle-like arms at you from all directions, layer the arena in shock traps, and spew acid from afar. For a debut boss, it was tense, it was exciting, and after besting it, I was eager to see what else the game had in store. Turns out I had just taken out the most interesting battle The Surge 2 has to offer.

One reason boss battles fall flat is due to the new directional blocking mechanic. Nearly every boss in the game follows a pattern where they will eventually swipe left, swipe right, swipe left, and you get the easy opportunity to block left, block right, block left, which will stagger the boss and open them up for a few attacks. Rinse and repeat, and you'll find yourself doing this sort of thing over and over again. Further, successful directional blocks accumulate on a boss in a way where it doesn't matter much at all if you fail a timing once or twice. You don't have to get three blocks in a row, you just need to get three blocks and a stagger will always occur on the third block made.

I am exaggerating and simplifying here a little bit. Obviously, not every boss' attack pattern is as predictable as left, right, left. However, most patterns are just slight variations of this, and even the game's final battle mostly comes to blocking a sequence of directional attacks and attacking it when it staggers. Character positioning is not as important as blocking, so get the timing down and you'll be block-countering your way through the game.

Another reason these boss encounters were so disappointing is simply a factor of what you are fighting against. At least four of the boss encounters in the game are against normal-sized humanoid enemies that attack mostly like regular foes, but with more health and maybe one slightly altered attack. Two other non-humanoid bosses are just souped-up reskins of some other regular enemies found in the game. Even though the boss fights in the first The Surge weren't especially exceptional, they were still probably more interesting and varied than what can be found in the sequel.

Much like the first game, the storyline for The Surge 2 mostly sits in the background, though it's not quite as subdued. Plot delivery still largely relies on audiologs found throughout the game, but in addition, your character will also see the occasional vision (called an Echo). In these, you'll see an event from the recent past with a mysterious girl named Athena, and slowly learn about what happened in the time after the plane crash and before your character woke up in a detention center. It's a mildly interesting mystery at best, enough to give the barest of incentives to make it to the next objective marker.

The Surge 2 makes several smart gameplay refinements from its predecessor that polish up some rough edges, and environmental design & traversal have improved considerably. However, the lack of enemy variety, disappointing boss encounters, and overreliance on blocking prevent The Surge 2 from making the full next step into being a great action RPG. 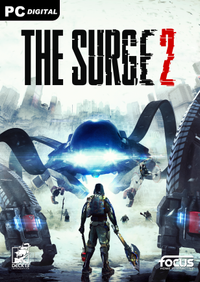