Higurashi: When They Cry Review

This is the fifth year since the "Curse of Oyashiro-sama" appeared in Hinamizawa. Will one person die, and another disappear again? Are you the object of the curse this year, or just a bystander? Does the curse exist at all? Is anyone truly safe? As the night goes on, you can't help but notice...

An extra set of footsteps.

Higurashi: When They Cry is the first story in the When They Cry series, a set of psychological horror/mystery visual novels by 07th Expansion, and written by Ryukishi07. It's broken up into 8 chapters, each its own self-contained story while still part of the over-arching plot of Hinamizawa and its ultimate fate. The story itself focuses on themes of isolation, paranoia, mental illness, and more. Parts of the narrative are influenced by Ryukishi07's brief career as a civil servant, dealing with such themes as child abuse, and intricacies as well as cliques of the Japanese political sphere such as far-right nationalism and xenophobia. 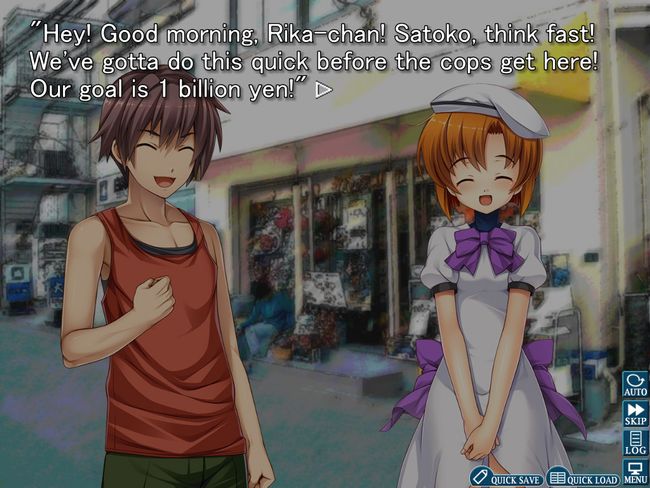 Higurashi is a story about the isolation one faces when somebody believes that they're truly alone, with nobody on their side. Many of the stories within Higurashi end in tragedy, with only glimpses of the overall truth poking through it all. Chapters 1 through 4 are labeled as the "question arcs" of Higurashi where most of the story is set-up, much like pieces on a game board - while the latter half of the story is about putting those pieces together to discover the ultimate truth of the series, and how to find a happy ending for those involved. Unlike most visual novels, Higurashi is for the most part a "sound novel" - in other words, a type of visual novel that is completely linear. Instead of making choices that will impact the story, the story happens completely naturally and linearly with very little input from the player themselves.

There are a few moments where players can make choices, but even those scant few moments are brief - and with the exception of Chapter 8, they have essentially no impact on the story. Much more so than other visual novels, the experience of reading Higurashi is much more akin to reading an actual book, although such staples of the genre like sound effects, backgrounds, character portraits, music and more do make an appearance. That being said - much of Higurashi's presentation is incredibly basic. Part of this has to do with its age as a VN, but parts of it also have to deal with the fact that at first almost all of Higurashi was done by Ryukishi07 single-handedly - script, visuals, music, and all.

Starting with the Answer Arcs a separate composer, by the pen-name Dai, took up production of the series' soundtrack - which up until then was comprised entirely of license-free music that Ryukisihi07 had found on the internet. Similarly, while the original portraits for Higurashi are still available in MangaGamer's releases, they've also implemented their own set. Personally I used the original portraits for my playthrough of the series, but I can understand why others might find them unappealing - while I'd argue that the original portraits hold a ton of charm, it's also true that they're very unrefined. Give them a shot, but don't be afraid of switching to MangaGamer's options if you simply can't stand them. 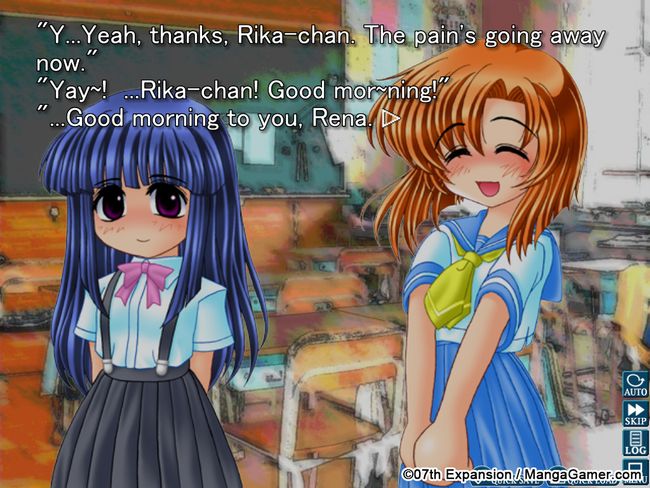 "Unrefined, but filled with charm" is probably the best way to describe Higurashi as a whole. It's no surprise that the series has gone on to receive critical acclaim, and it's especially no surprise that the series' anime adaptation has become a classic of the horror genre. It's really tough to speak about the VN's story in specifics without spoiling it, but despite the scenes of abject horror, or the descriptions of stomach-churning violence and gore - there's an underpinning of hope permeating the entire story. Ryukishi07 wrote Higurashi because he had something to tell his readers, a message that he wanted to share. One of hope despite all else - and that you're never truly alone.

It's this heart that elevates all of Higurashi's little faults - or perhaps its the fact that these faults, these rough edges exist that the series heart can shine through so sincerely. By the end of the story, the rural Japanese village of Hinamizawa truly feels like a second home and elevates the cast to a group of friends that you could trust with anything. For every scene that puts chills up your spine, there's one that fills you with hope. No matter what happens, the story explores themes of humanity - both the good parts and the bad. As Ryukishi07 himself admits, some of these scenes might be hard to accept, and it's perfectly fine if you don't agree with them, but the humanity itself present in those scenes is impossible to ignore.

I won't lie and say that there aren't some parts of Higurashi's narratives that made me raise an eyebrow due to its content, but having finished the story - it's clear that all of it was written in good faith. When all is said and done, it's a story about positivity - about finding a happy ending despite all of the odds. Higurashi certainly won't be a story for everybody, even for folks that are already fans of Visual Novels - but it's the type of experience that you just won't find anywhere else. If you're willing to open your heart to give it a chance you'll find a lot to love.

Umineko When They Cry: Gold Edition heads to Kickstarter on November 7

Kingdom Come Deliverance: How to Clean Swords, Clothing and other gear when they get dirty

Watch the original concept trailer for Cry On

So when does Mass Effect: Andromeda take place?

Higurashi: When They Cry

Series
When They Cry