While ostensibly not an RPG, SEGA intrigued us by revealing that Puyo Puyo Tetris 2 would incorporate some clear RPG elements within the titles brand-new Skill Battles mode; complete with levels, stats, equipment, and more. While we don't have much to share about our impressions for the mode quite yet - we'll have a full impressions piece ready once we've had more hands-on time with the game, though probably not akin to a full review - we were afforded the opportunity to check out the game on both PlayStation 4 and PlayStation 5. We've captured about 10 minutes of footage of the game's Adventure Mode, returning from the first game with a few twists (including a world map), and so far we can say it's as zany as ever. Skill Battles, unfortunately, don't appear to be as prevalent, at least early on, as they seem to have been made out to be - but I wouldn't be shocked if things ramp up later, especially considering that the while Skill Battles can be played outside of the Adventure Mode, the equipment that you can use for your teams can only be found by completing Skill Battle missions within the story.

I didn't get much of a chance to showcase the system very well in the above video, but I did turn off the game's new auto-difficulty functionality for the story. Upon starting Adventure Mode you're given the option to utilize it, and that might make fights tougher if you're already steam rolling them. It's also likely that these fights will have tougher AI further in the story, necessitating you to actually both use your abilities, consider your equipment, and manage MP. I'm hopeful that will be the case, at any rate - I already loved the first Puyo Puyo Tetris' story mode, so adding any sort of meaningful depth or progression to it this time around sounds fine by me. One thing I can say with some certainty is that you aren't missing out by playing the PlayStation 4 version of the game instead of the PlayStation 5's - except for slight changes to the button prompts, they're essentially identical. That being said, the same holds true for much of Puyo Puyo Tetris 2 compared to the first game - there's some new faces in the cast, and Skill Battles, but everything else appears incredibly similar to the original, down to the UI. Whether or not the changes present will be enough to help the sequel stand out in the end, we'll have to see.

Either way, we'll have a better idea of that all hashes out closer to the game's December 8th worldwide launch. Stay tuned for more! 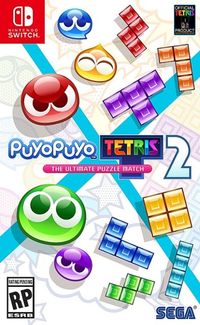