It's that time of year again - it's time for us to dish out some awards to some of the top games of the year celebrating the areas in which they excelled.

Best Original Soundtrack in a 2011 RPG - Bastion
[image="bastion_award1.jpg" game="1" nomark][/image]We begin with a really tough, hard-fought category. Some members of staff were pulling for the soundtrack to Square Enix's Deus Ex: Human Revolution, whilst others wanted it noted just how memorable Radiant Historia's music was, while Skyrim's monk chants were loved by all - but then there was Bastion.

Bastion's soundtrack is remarkable because like the game itself this download-only affair manages to stand shoulder-to-shoulder alongside big-budget RPG heavy-hitters Japanese and Western alike. The folk-song like quality to much of the music weaves in to the texture of the game, matching the narrator and the world itself perfectly.

As the songs become more relevant to the actual story and as ever-so-slightly different takes on earlier musical riffs creep in later on, it hits you - this soundtrack is amazing - and was created, like the rest of the game, on a comparatively tiny budget.

Best Voice Cast Performance in a 2011 RPG - The Witcher 2
You wouldn't think that The Witcher 2 was made in Poland, a country without English as its first language. CD Projekt's continuing adventures of Geralt work right through language barriers, managing to pack in an excellent narrative that doesn't feel forced or hokey whilst also packing in excellent voice work that helps push that well-written story to greater heights. 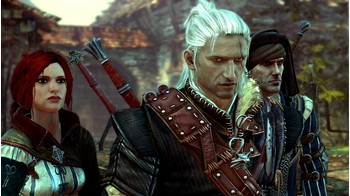 Characters like Geralt are brilliantly realized by their actors.
Led by series stalwarts Doug Cockle (Geralt) and Jaimi Barbakoff (Triss Merigold), the entire cast was well spoken and fully realized, pouring life into the fascinating world around the player. Without such convincing delivery, the interesting world might still have fallen flat. A quality cast goes a long, long way.

Very few games have been able to approach mature subject matter as effectively and as conducive to the genre as this game has been able to - the sheer gravity one felt during some of the more dramatic moments in the story were made all the more resonant thanks to the featured talent. Developers take note: if you are going to create a fantasy game, you've got quite the task in esuring that the delivery of characters and character concepts can at least match the benchmark that CD Projekt RED has set with The Witcher 2.

Best Handheld RPG of the Year 2011 - Trails in the Sky
[image="trails_award.jpg" game="1" nomark][/image]Competition was surprisingly staunch in this category despite what some might claim was a weaker year for handheld RPGs than other recent ones. This year saw RPGs from major players such as Square Enix begin to hit smart phones, but it also saw a new handheld introduced into the market, the Nintendo 3DS. Throughout the year some of the heavy hitters from the golden era of RPGs made their appearance including Final Fantasy and the "Tales of" series.

One game stood higher than the rest as a solid example of what developers are able to pack into the smallest of gaming devices that rival even their console counterparts - Legend of Heroes: Trails in the Sky. With a superbly-written storyline, a deep battle system, strong character development, and solid music featuring mind-melting guitar riffs, it is easy to see why after much debate Trails in the Sky nabbed the crown in this category.

While this didn't factor into the awards process it's also hard not to mention the value Trails in the Sky offered - giving first time buyers a Limited Edition bundle that included a soundtrack CD and poster at no extra charge - something we can definitely get behind. We're very interested to see what XSEED has in store for the next two games in the Sora no Kiseki trilogy!

Best Big-Screen RPG of the Year 2011: The Elder Scrolls V: Skyrim
While some might have figured that this category would be a foregone conclusion right from the word go, The Elder Scrolls V: Skyrim had some truly stiff competition that caused a staff debate to rage - especially regarding the excellent quality of CD Projekt's The Witcher 2 and the surprisingly worthy prequel Deus Ex: Human Revolution. 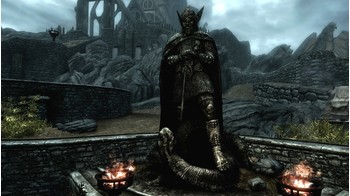 The real star of Skyrim is the world and land itself.
Past that there were debates about the questionable quality or release-worthy state of the PlayStation 3 version of Skyrim and all those nasty bugs - but Skyrim still fought its way to the head of this category.

It's a testament to the quality of the world Bethesda has created and the hard work they've put into it that it still stands up as the most impressive big-screen experience this year after all that scrutiny. The world is massive and without the true consequence some other games offer, these two things combining to provide players with a sandbox within which they can truly lose themselves and forge a new life as Dragon born, as a hero - or a villain if you prefer.

Skyrim didn't win this award for technical achievement, but instead for how engrossing it is - standing at a crossroads between games with heavy lore and heavier stories and those that are incredibly open sandboxes to make your own fun in, it somehow manages to pillage some of the best features from both camps.