We've already had two articles extolling our favourites of 2011 across numerous categories - and as we exit the first week of 2012 and enter the second and begin looking to the future, it's time for us to clear up our final picks for the Best RPGs of 2011.

Import of the Year 2011 - Final Fantasy: Type 0
[image="type0-award.jpg" game="0" nomark][/image]2011 has been a great year for import fans, especially in the second half of the year. As such, choosing just one title to fit the Import Game of the Year award was quite difficult.

It’s only fitting, however, that the best one has appeared on a handheld (because Japan loves handhelds… get it?) We’re talking about Final Fantasy Type-0, a game that essentially was too grand for its platform.

Having spent five years in development, this PSP game returns the Final Fantasy series to its classic beginnings. Type-0’s strong points are highlighted in its battle system, cast of characters, and gorgeous production values. Don’t go in expecting an easy time, however, this game is brutal yet rewarding all at once.

Between the game’s world view and Takeharu Ishimoto’s wonderful score, there is no doubt that this is one of the best looking PSP titles to date, and the Final Fantasy fans have been waiting for.

Runners up: Tales of Xillia, The Last Story

Indie RPG of the Year & Surprise of the Year 2011 - Bastion
It says a lot that we ran three different RPG Site Awards articles for 2011 and Bastion has featured in every single one. First it was rewarded for its excellent original soundtrack and then again for its writing, in both cases beating out major titles from huge Western studios.

[block align="right" artwork="Scumbag_wallpaper1920x1080.jpg" game="312"]Bastion is so, so much more than just pretty artwork.[/block]That makes it no surprise that it was a key contender when we began debating for the best title from an independent developer - but it also underlines just how surprising the game itself was, coming from an unknown studio and originally debuted to the public without backing from any major publishing house, turning out to not just be awesome but be a full-on RPG of the Year contender.

Supergiant Games was only founded in 2009, its modest team of seven employees made up primarily of veterans of EA Los Angeles - the team that produced the most recent Command & Conquer titles. It was natural, then, that the company would make an isometric title - but an RPG was never an obvious choice.

Having seen Bastion, though, it makes us wonder if they could've created anything else. The love and craftsmanship that went into the game is clear from the moment the raspy-voiced narrator speaks his first line in the introduction. Heart, soul and raw, well-fashioned quality make Bastion a more than worthy recipient of these awards.

RPG of the Year 2011 - The Elder Scrolls V: Skyrim
[image="skyrim-award.jpg" game="0" nomark][/image]2011 has been great for RPGs. We've seen the most hardcore flourish in both East and West with Dark Souls and The Witcher 2. Japanese RPG tropes have lived on in more from Tales and Disgaea, but the West has stood strong with names both big and little, from the revival of Deus Ex to the arrival of Bastion - but we can only choose one RPG of the Year for 2011 - and it has to be The Elder Scrolls V: Skyrim.

Bethesda has crafted something ridiculous with Skyrim. Whilst we'll admit the combat can still feel a little inaccurate in first person and very inaccurate in third, this is a game that transcends its combat, dragging you in with a world and lore that is so incredibly satisfying that it overshadows that and many other flaws, including a plethora of bugs that are endemic in Bethesda's massive open worlds. 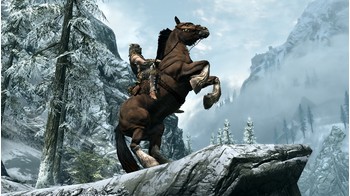 Not an arrow or a knee in sight.
The first time a dragon shows up randomly in the wild to battle you is a magical feeling, but more magical is the moment that inexorably other wildlife gets involved in the fight against dragons, or the moment when several moral actions stack up in wildly differing ways. The cogs the game turns to figure out what should happen next are almost visible, but the immersion is such that it doesn't matter - you are Dragonborn - and you'll do whatever you want. Consequences don't matter.

Last year's winner, Mass Effect 2, was crowned largely thanks to the execution of its story, which whilst often simple felt deeper than it actually was. Skyrim wins for the opposite - for giving us a play box in which the player can relax, do what they want, explore, break, fix and craft things. In an age of everyone pushing for everything to be more cinematic, Skyrim pushes hard in the other direction, offering you a world and gameplay mechanics to explore, use and abuse exactly as you please - and it's awesome.

Runners up: Xenoblade, The Witcher 2