It feels like this past generation is winding down and things are finally starting to get just a little quiet as we move on to the newest consoles. Sure, some of the biggest RPGs are yet to come for the Playstation 3, but I figured now would be a good time to reflect on what we have already been given in what is almost a decade of this genre's amazing collection of titles. It is with that I would like to go through some of my favorite soundtracks from this span, focusing on the ones that my ears have a profound amount of appreciation for.

Note: Just so we can get this out of the way, I count the past generation as the Nintendo DS, Sony PSP, PS3, Xbox 360, and Wii, with whatever was left over for the PS2 bringing up the rear.

The Legend of Heroes VII: Zero no Kiseki

Are you surprised a Nihon Falcom album would find its way on to the list? You shouldn’t be if you have listened to any of their music. Known for applying heavy use of rock with classical instruments (especially the violin), rarely will you find a dull track in their body of work.

Falcom Sound Team JDK (the name of their in-house band) puts forth some of their finest work inside Zero no Kiseki’s “Super Arrange” album. Much like their other soundtracks that fall under this label, the group pulls songs from the hours worth of music they put inside each of their games, combining them together into a remix of sorts. I can honestly say that this happens to be one of my favorite video game albums of all time.

Each song shook me down to the very core in many different ways. With “To Be Continued”, there is a moment a couple of minutes in where the song takes a little bit of a break with some soft piano playing, only to come roaring back in this fierce crescendo, and it always sends shivers down my spine playing it at max volume as I tend to do. The rest of the album is just as effective as this one, so I highly recommend picking this one up.

Standout tracks include: A Light Illuminating the Depths, To Be Continued, and Intense Chase (four minutes of non-stop, mind-blowing metal).

Pound for pound one of the greatest soundtracks to come out in a good long while, NieR is known a lot more for its music than the game itself (even if I personally loved my time with it). Going at things from a different direction by injecting a lot of vocals into the album than what many RPG fans are used to, allowing one to freely enjoy the music completely out of context which I personally feel is important for long-term enjoyment.

Emi Evans’ beautiful vocals bring a heavy dose of emotional investment into the story, carrying the player through this unique and ultimately very weird experience that much like Ar Tonelico has invented its own “ancient” language that is then put into song. I can’t say enough good things about the soundtrack - it is basically the benchmark for what other video game albums arguably must strive to meet.

What is perhaps most surprising about the music is who it was written by: Keiichi Okabe, someone who for many years was mostly known for his work behind the Tekken series (not to belittle DoDonPachi’s great soundtrack). The result is Okabe’s magnum opus to RPG fans, with every track is as unique and refreshing as the last, touching on musical elements of the sublime to the industrial.

Standout tracks include: Kaine Escape, Gods Bound By Rules, and Song of the Ancients (Fate).

Of course, a list of the best OSTs isn’t complete without Xenoblade Chronicles, a game that is not only nice to look at - surprising given the Wii console’s limitations - but employs a provocative and well-textured soundtrack that is stellar in every sense of the word.

Heavily diverse in nature, the collaborative effort of Yoko Shimomura, Manami Kiyota, ACE+, and Yasunori Mitsuda shine through to create a bold yet highly refined spread of music that is just heaven for the ears, fitting well into the confines of the story while equally working well enough on their own.

Whether it’s the head-banging prog rock that makes up “You Will Know Our Names” or the more downbeat tempo of “Colony 9” that just feels like it wants to take you along for an amazing journey, it is easy to get swept up in the brilliance of it all. A lot of care and attention went into crafting the music, and is truly a highlight for the generation.

Standout tracks include: Gaur Plain, Prologue B, and Engage the Enemy.

The Hymmnos songs from the Ar Tonelico series have always been some of the most beautiful music that Gust has put out, which is saying a lot considering the quality of their music is already pretty high. Backed by the wonderful vocals of Kokia and Akiko Shikata, nowhere is it more apparent than in Ar Tonelico Qoga.

While some of the vocal tracks are sung in Japanese, it’s the fictional language of Hymmnos that leaves the stronger impact on the listener. I love how there are fans out there willing to translate the alphabet into English romanization, showing that creator Akira Tsuchiya created what is practically fully-rounded language.

The music itself is heavily layered in vocals with complex rhythms found in many of its tracks. Overall, the album is a very nice step up from Ar Tonelico which already had my favorite track from the series. Ever since I reviewed the game, the OST that was included with the game remains in my car's CD player.

Well, duh! Persona 4 is arguably the best album that Shoji Meguro has ever put out. While his previous work on the Shin Megami Tensei was dripping in atmosphere with a darker tone, it wasn’t until Persona 3 that he started to move towards a more J-Pop/Rock fusion composition that just felt far more lively and uplifting, even more so in its sequel but also in a much more varied fashion. Put it another way, it’s the first time I really felt the power of his music.

From the beginning all the way to the end, I can identify every single moment in the game just by hearing a little bit of the music, like stepping into the Velvet Room and hearing the relaxing sounds of a piano playing with soprano vocals layered on top.

It felt exciting working my way to the next dungeon just to hear the next song that I know is just going to blow me away. It’s all just so damn catchy, especially when it’s at its most energetic towards the end of the game. It’s an album that I won’t soon forget. Your affectiooooon, your affectiooooooon…...

Standout tracks include: The Almighty, Mist, and The Genesis.

And there you have it - a list of my favorite RPG soundtracks of this past generation. I would love to hear what your favorite albums are, so please share them below! 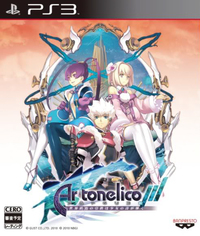