NieR: Automata Guide: How to get all 26 Endings, including the Best Ending

NieR: Automata has a lot going on - slick combat, a story that twists and turns and makes you think, and really a lot else besides. It's a damn good game for those reasons - elements like this combining are a good part of why we ended up giving it such a glowing review.

Seriously, it's a damn good game. it's something quite special.

All Nier: Automata Endings - How to get the True Ending

Nier Automata actually has a huge amount of endings, though only five of them are 'proper' endings to the game. These make up the main 'routes' through the game - Ending A, B and C being the bulk of it, with ending D and E coming off the back of that as optional extras. The 'optimal' ending is arguably ending E, but you need to have seen every previous ending in order to access it.

As well as this there are a massive 21 alternative endings that are mostly little in-jokes the developers added. These can be accessed at various points throughout the game through specific actions. Here, we detail how to get each ending while keeping the details as scant and as spoiler-free as possible. Be warned, however, that some spoilers will follow just in our descriptions of how each ending is attained. 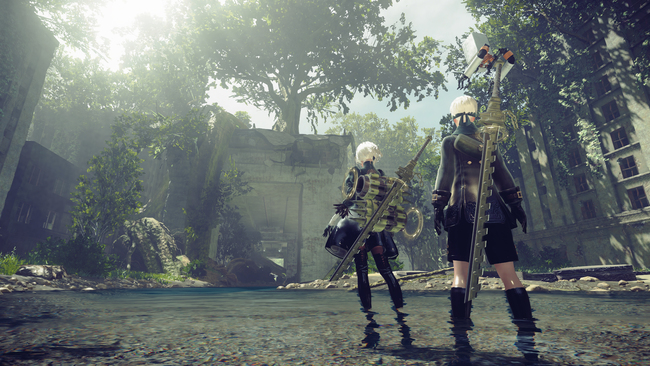 These five endings are the 'main', true endings of Nier Automata - the ones that form the game's main story proper. If you continue to play the game, you're likely to discover these for yourself, leading right up to the true, final versions of the game's ending. Some of this might be a little hard to get through.

Alternatively, these endings can be achieved at various points in the game and are all weird, quirky and non-canon ways for the story of Nier: Automata to come to an end. These are a little more hidden - but we've got you covered. Here y'go:

Ending F : Mission Failed - When 9S tries to restore his OS for the first time, simply run out of time.
Ending G : HunGry for Knowledge - Leave the mission area when controlling 9S for the first time.
Ending H : A Mountain too HigH - When the Goliath appears for the second time, flee from the battlefield.
Ending I : No I in Team - After defeating the boss in the Copied City, abandon 9S.
Ending J : Bad Judgement - Kill the religious machines in the Abandoned Factory when first meeting them.
Ending K : Aji Wo Kutta - Eat the mackerel given by Jackass.
Ending L : Lone Wolf - Abandon the battle area in the final battle of either Route A or Route B.
Ending M : Break TiMe - Choose to not help Pascal's Village near the end of Route C.
Ending N : No Man's Village - Kill every machine in Pascal's Village.
Ending O : Just YOu and Me - Abandon the battlefield during the beginning of Route C.
Ending P : CorruPtion - Get fully infected by the logic virus in Route C.
Ending Q : Questionable Actions - Abandon 2B in Route C when controlling 9S.
Ending R : MaveRick - Attack Pascal's villagers with A2 inside the Abandoned Factory.
Ending S : City EScape - Abandon Devola and Popola during the Tower sequence.
Ending T : FaTal Error - Unequip the OS plug-in chip.
Ending U : DebUnked - Self Destruct inside the Bunker.
Ending V : Wreckless BraVery - Do not hack into the Tower and wait for the accompanying NPCs to die.
Ending W : Broken Wings - Die during the intro level in Route A.
Ending X : Time to RelaX - Abandon helping 2B with A2.
Ending Y : HeadY Battle - Fight the secret boss and let it Self Destruct.
Ending Z : OverZealous: Kill Pascal with A2 in their first encounter.

NieR: Automata Guide: All Pod Program Locations - How to get all pods

NieR: Automata Guide: The Best Weapons listed, plus where to find all of them

Determine Humanity's fate in NieR: Automata on Xbox One on June 26