Ever just want a mobile RPG to play for a few moments here or there? I love my portables as much as the next person, but I have trouble bringing it everywhere I go—namely, it’s pretty hard to pull out and play during lulls in the workday. But my phone is always there, and I find myself gravitating more towards mobile games for what I used portable systems to fill my time with. But, it’s not exactly easy to sift through the dirt for a diamond… that’s where Mobile Moments comes in! Mobile Moments will take a seemingly random mobile RPG from the Google Play Store and I’ll play it, and tell you if it’s worth your precious storage space.

This time we're looking at Solitairica, a free-to-play game (well, on Android; it's $1.99 on iOS, but I don't know the difference between the two versions) that mashes some RPG elements into the classic card game of Solitaire. There are a few in-app purchases in the form of new deck types, which can be helpful depending on your play style, but are not required to complete the game. If anything the new decks can make things more complicated for new players, so they aren't a purchase that's recommended immediately. 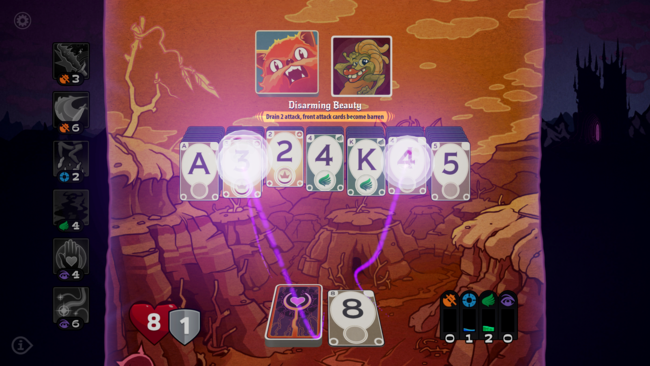 Like my first Mobile Moments pick, I had no knowledge of what Solitairica was before seeing it in my recommended Google Play list and installing it—the mash-up of Solitaire and RPG was enough to give the title a try. As I played the game seemed to have taken more elements from rogue-likes rather than traditional RPGs, and while that's personally not a genre I enjoy, the way these elements are employed are sure to pique the interest of rogue-like fans that want a change of pace.

Solitairica takes players to the land of Myriodd, which has been taken over by the evil Emperor Stuck, and it's your duty to take him down. Solitairica has you fight randomized enemies in an attempt to get to the Emperor, but if you lose and your heart breaks, it's game over and you'll have to start again. Anything you obtain or buy in the in-game shop itself (besides real money purchases) is lost, and you'll have to restart from scratch.

Of course, the name of the game is to win at a modified version of Solitaire, clearing your board of cards before your enemy manages to whittle down your health. You'll draw one card a turn, and use that card (if possible) to make sequences with the cards on the board. For example, if you draw a 3, you'll be able to pull a 2 or 4 off the board, and if possible continue the combo if the cards on the board permit (3, 4, 5… 3, 4, 3, 2… and so on). 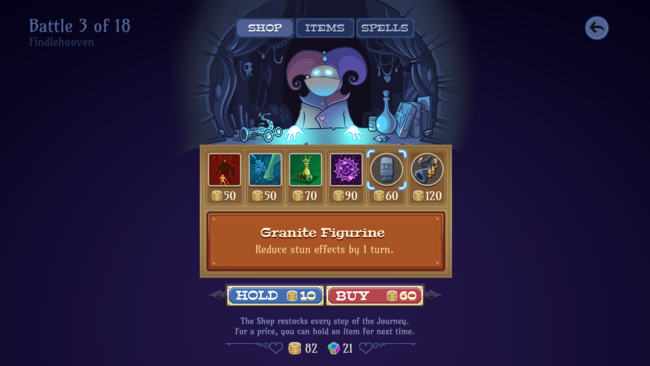 While clearing cards, you'll also accumulate energy, which you can use to cast spells to help yourself or hinder the enemy. There are four different types of energy, and which types you'll find easiest to accumulate will depend on your deck and whatever accessories you may have equipped. Since the in-game vendor's inventory is randomized between rounds, this is where the majority of the strategy in Solitairica comes in. You will want to buy spells and accessories that will make best use of the energy your deck focuses on, lest you have a bunch of spells you can't use because you can't gather the appropriate energy needed for it.

From there, a lot of Solitairica is luck-based. For starters, given the nature of Solitaire, you can simply not get the card you need to clear the board, forcing you to take multiple enemy hits without progress. With the randomized vendor storefront, you may not be able to get any decent spells and lose the ability to mitigate sticky situations like the above. Even enemy modifiers are randomized, so it's quite possible just to get stuck with a nasty set of modifiers that is difficult to defeat. 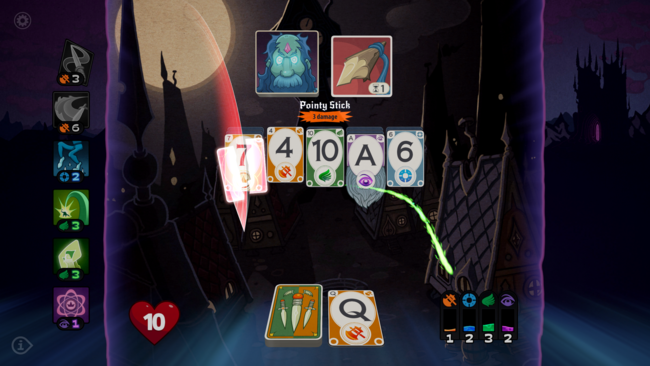 In Solitarica bad runs can just happen despite your best efforts, and it's the aspect that puts me off the most when playing it. I went into the game thinking there would be more permanent progression and less of a rogue-like feel, but that doesn't exactly make the game bad, as it's a nice mix of those rogue-like elements with a classic card game. While it's not something I personally will be playing into the future, it is certain to be a good title to look into if you're fan of what rogue-likes typically offer.