Granblue Fantasy is a huge mobile game, and it can be a bit overwhelming to play even with its built-in tutorial that guides you at the beginning. We present below a simple beginner's guide to get you informed enough with the game's most important mechanics. If you are still at a lost on how to install Granblue Fantasy for both PC and mobile, Zack wrote up a great and simple guide on how to set everything up and running, as well as how to transfer your accounts inbetween.

It is highly recommended that you create an account when the Premium Gala (also known as Flash Gala) banner event is up. These usually occur at the end or the start of each month. Creating an account during this period will give you a larger variety of characters you can buy on your beginner's ticket if you intend on spending money.

After playing the tutorial at the beginning, the game will force you to draw a character. You will be provided free 10 rolls for a first time player. This roll is guaranteed to give one of the 6 possible SSR characters:

If you don't like the results of your roll, you can unlink your account and reroll for the desired result. You might get a temporary IP ban if you create too many accounts in a short span of time, so be wary.

When you're set to play, you want to get a grasp on the characters you're using. Early teams are focused on getting resources so you can draw more characters. However, this won't be your only main concern once you pass chapter 30 as your progression will most likely be hindered by difficult bosses and you will need to understand more on how to play the game to progress further. 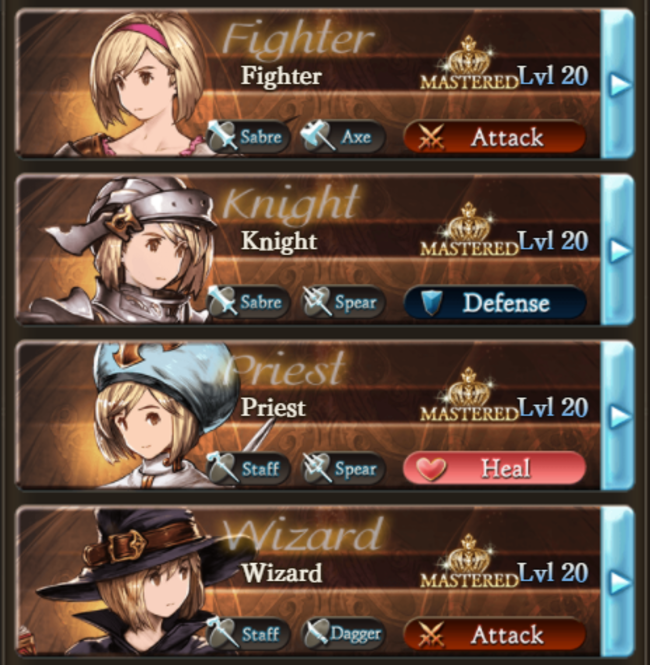 The class system represents the protagonist's role in a battle. At the start of the game, you will play as a fighter and by reaching its max level (Level 20), you can unlock new classes or even a stronger version of a similar class. Most classes can be unlocked by reaching the max level of two different classes, while some classes require you to complete a certain quest to unlock. Another thing required for unlocking classes is CP, which is earned by raising your rank. They can also be purchased using Moons, a currency for obtaining duplicates when drawing characters. Other benefits also include raising your stats permanently so be sure to level up each class. If you are unsure about each class' role in battles, we've provided a simple break down below. 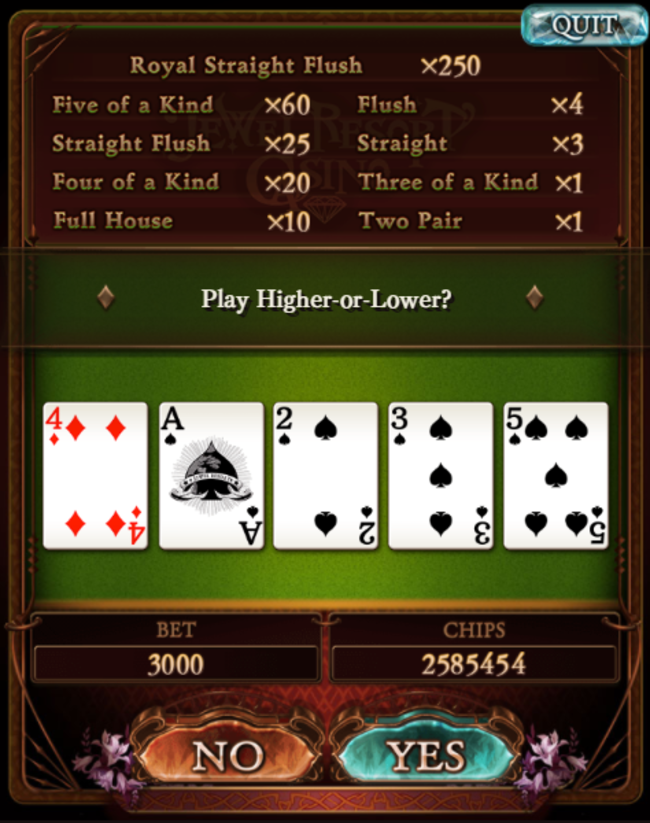 When you reach chapter 8, you will gain access to the Casino Resort. Going to the Casino can let you purchase goods with Casino Chips, which includes costumes, summons, and even materials to farm your daily goods. The great thing about the Casino is that you don't have to spend any real money, you just need to purchase everything with Casino Chips. Every week, the game will provide you some casino chips as you login. If you really want the big prizes, you will need to play Poker. The odds will be against you, but just winning that big prize will give you enough chips to purchase all your daily needs. The rules of Poker is that you will draw 5 cards, and you are given the choice to discard any card you want. If you manage to draw a winning hand, which can be two pairs, three to five of a kind, or flushes. You can play the double up, where you have to guess if the upcoming card is higher or lower than your current hand. This is the most stable source of farming casino chips, and you want to further risk going for the big prize, there is also the Bingo option. 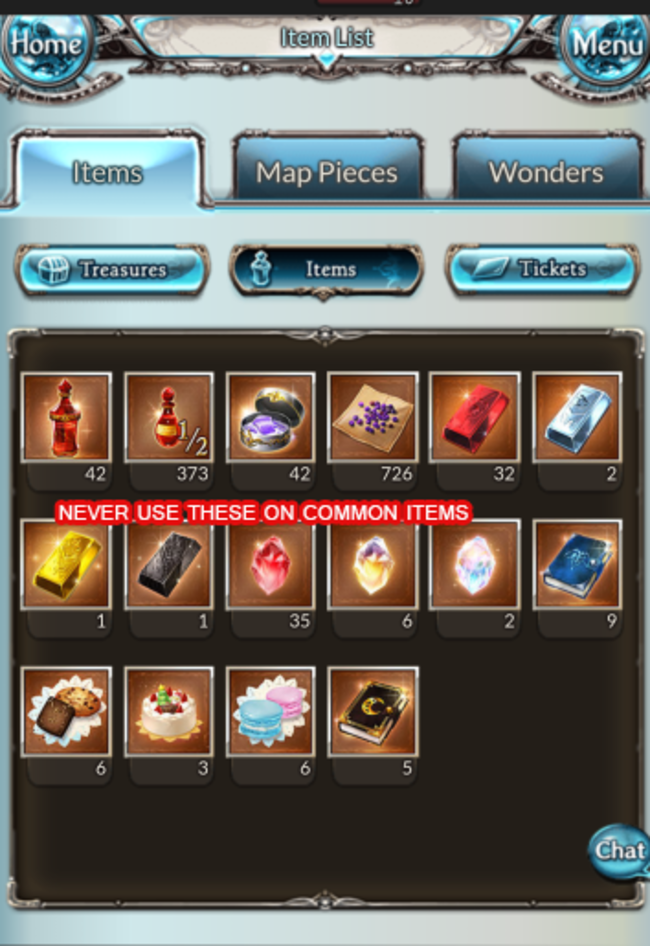 In most games, your stats will be based on the weapon you're currently using. However, this does not apply to Granblue. The system works as an accumulation of your entire weapon grid, and each weapon has their own unique skills that will stack on each other. Stacking these weapon levels is the key to progression. Each weapon has a level cap, which can be raised by finding a duplicate or using Damascus Bar. If you have stumbled on these bars, DO NOT USE THEM. It might sound insane, but these bars are extremely limited in supply, and there is no reliable way of finding them unless you fork out money. You do not want to use these bars unless they are for the ultimate or the rarest weapons. If you ever manage to find a Gold Bar, NEVER USE IT on a weapon. A gold bar can be used to unlock the 10 Eternals (the strongest characters) in Granblue.

For starting players, you'd want to amass a collection of weapons to fill your grid, not prioritizing raising their level caps by sacrificing a spare. 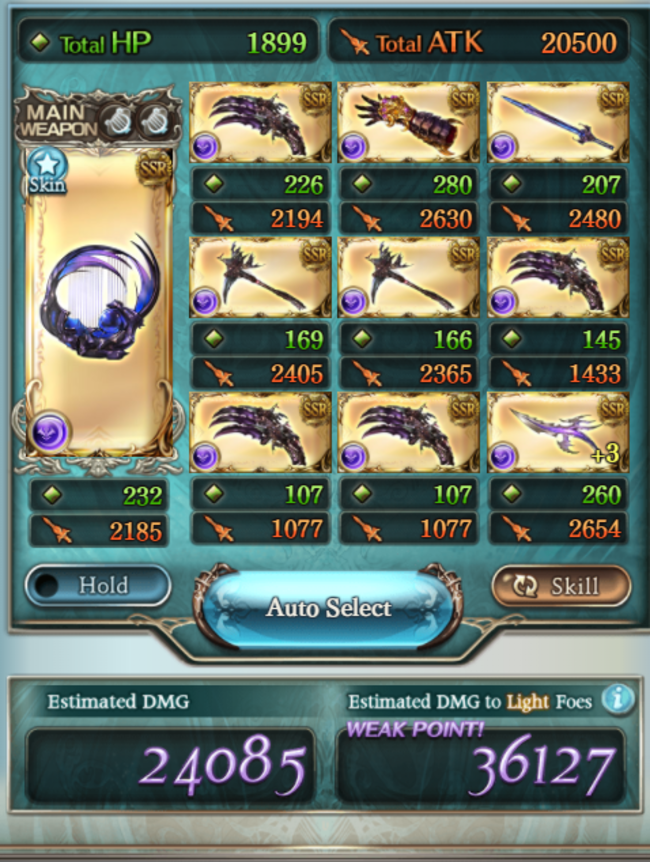 Depending on what sort of character you managed to roll, you want to focus on gathering weapons suitable with their element type. In earlier parts, a combination of elements can get you through battles with ease. However, as you progress further, you will need to take advantage of elemental weakness to stand a chance through building your weapon grid. It can also depend on what kind of player you are, if you're the Free-to-Play type or the Pay-to-Win type. If you're going the free route, you want to start focusing on fighting Omega/Magna bosses. These bosses will drop an SSR Weapon along with a Summon, which will give these weapons a bonus effect. These bosses are very strong for new players, but you can call for help from other players by hosting the raid. Hosting a battle will give you a red treasure chest, and you can get another red chest from dealing the highest damage to the boss. The reason you want these red chests is that they have a 10% drop rate of the SSR items.

For beginners, the best element to start is Wind, as it has a great SSR summon that can be bought without spending actual money and great weapons from the Omega Bosses. However, Wind Element is also one of the weakest for end game and you may struggle to keep up with other elements.

Note: Elements such as Light and Dark does not suffer from elemental weakness. However, their Omega weapons has an abysmal drop rate compared to the other elements.

If you're the spender type, the best approach would be based on what sort of summons you rolled. If you managed to get the Primal Summons, (Bahamut, Lucifer, Agni, Shiva, Varuna, Europa, Titan, Alexiel, Grimnir, Hades, Zeus), your whole game plan will revolve on getting premium weapons based on the element of this summons.

How to Efficiently Upgrade Your Weapons 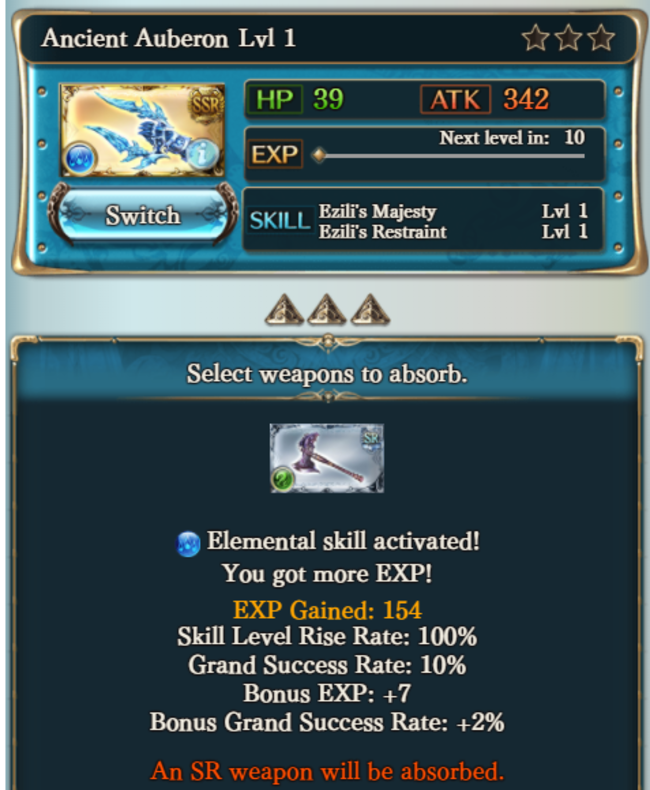 Raising weapon skill level is the key to boost your maximum damage. However, with each successful weapon upgrade, your success rate is reduced. The fodder weapons use to upgrade your desire weapon can be upgraded with lower rank weapons. By using this method, your fodder weapon will be counted as two. Imagine the current weapon requiring two SR weapons for a 100% success rate; if you use a Level 2 SR weapon, it is the equivalent of using two SR weapons. This is an effective way of upgrading weapons when they reached a higher level. 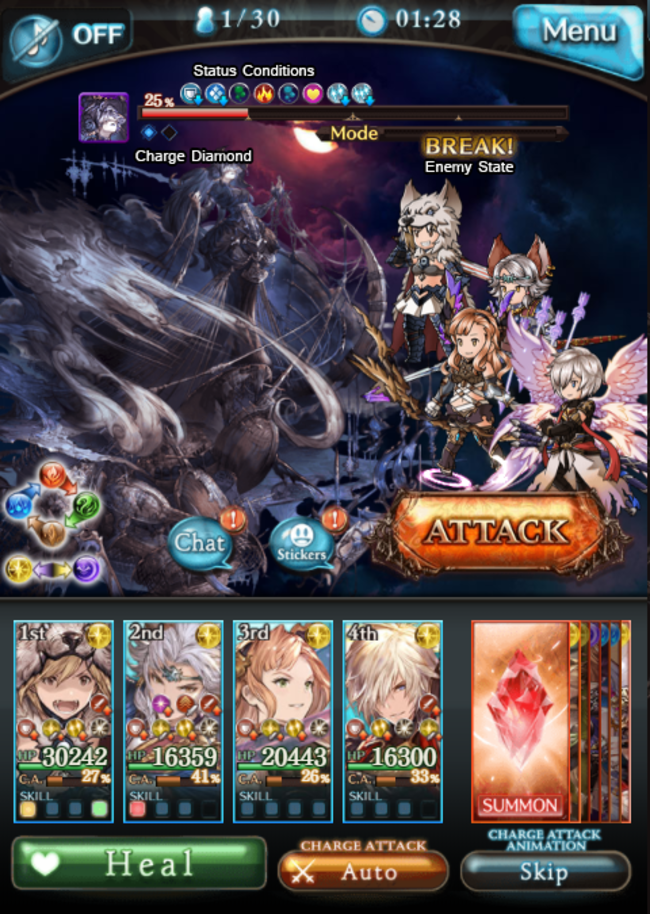 A lot of the bosses in Granblue Fantasy have a unique fight pattern. Most bosses have a Trigger, a special attack that occurs when their HP drop below a certain percentage. The other thing to watch for is their Overdrive Gauge, this bar will let them use their ultimate attack when their charge Diamond is full. Do keep in mind that these aren't always offensive attacks as some of them are buffs. If you manage to deal enough damage to reduce the Overdrive gauge to 0, bosses will go into Break mode. During Break Mode, your characters can hit more frequently and the boss will not use their ultimate skill. For higher level content, you will need to understand a boss' Trigger, especially during Raid battles, as each player can be a liability for not understanding these mechanics.

New players should participate in all events as they are an excellent source of crystals and can let you exchange items that are beneficial to new players.  A frequently occurring event is the Rise of the Beast event, which lets you obtain gold bars and a selection of weapons that comes fully uncapped. New players can still be rewarded despite being outpaced by veteran players.

Events are also frequent. Every two weeks or so there is always a collaboration event, which lets you obtain unique SR characters limited to the event. If you miss out on an event, occasionally there will be reruns after some time. Some events are also added permanently as a Side Story event. 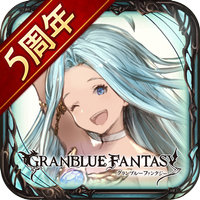