Lineage II Revolution Class Guide: All the races, the specialized classes, and their skills

Lineage II Revolution is a mobile re-imagining of NCSoft's hugely popular MMORPG Lineage II. It keeps the intricate class system of its predecessor intact. Similar to the original MMORPG classes are divided into unique socialities based on the race of your character.

That being said, the race of your character will impact the stats of the class you pick and will impact how you might approach specific content such as Raiding, PvP (Player Vs. Player), or Castle Sieges. Below we will be providing an explanation of each class and the skills available. However, the rare skills unique to each class will not be provided in this run-down.

The Races of Lineage II Revolution

Humans are incredibly versatile and, due to the well-rounded nature of their stat distribution, are well-equipped with handling almost any situation during early gameplay. However, this means that they do not have any on strength in particular until reaching their first class change.

For what the Elves lack in hit points they make up with their high evasion and larger MP pool. They are a race ideal for those who prefer ranged or magic combat due to the natural affinity given to them through their passive skills.

Similar to their Elven counterpart, the Dark Elf lacks the number of hit points given to the Human and Dwarf race. However, they have the highest natural critical and attack stats in the game which makes them formidable when it comes to dealing damage.

While the Dwarf lacks any real natural attack power, this race makes up for it with their sturdy natural defense and high hit points, making this race appealing to newcomers to the game. 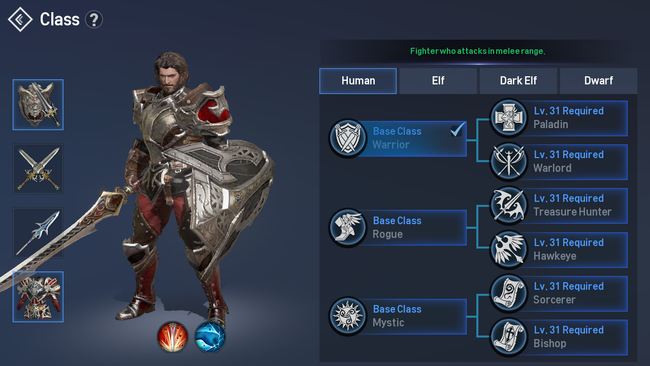 The Warrior serves as an all-around solid tanking and melee DPS class. Specializing in Heavy Armor gives them a higher defense than the base classes of the Rogue and Mystic, making them perfect for the front-line and players who might not be as adept at moving outside of AoEs. The Warrior can branch off into a handful of Tanks or a Melee based DPS classes.

There are no racially unique active skills for the Warrior class in Lineage II Revolution. 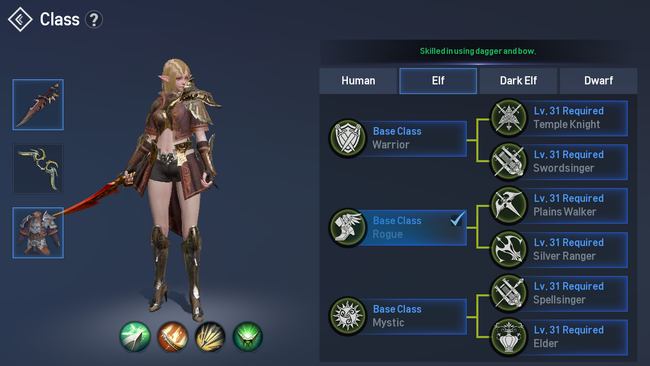 Fast on their feet, the Rogue class is ideal for those who want to do damage quickly with either the Bow or Dagger. This class branches off into two paths, similarly to the Warrior and Mystic, but offer a ranged (archer) or melee DPS option depending on the route. 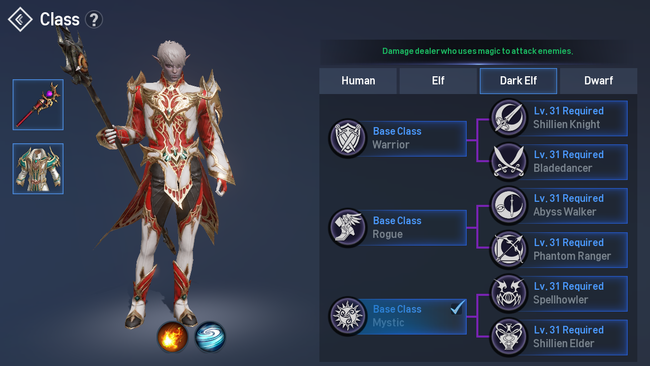 Specialized Classes allow players to branch off into a handful of different paths, allowing for more diversity in playstyle and party composition. These unique classes can be accessed at level 31 and are obtained after completing a series of class change quests. Upon completion, new active and passive skills will be unlocked.

Tanks are essential to late-game content in Lineage II Revolution. While leveling them may prove tiresome, players and Guilds will always have room for tanks in their parties. Equipped with Heavy Armor and a Sword and Shield they are the perfect ramparts to protect their party members in large-scale raids or PvE. At level 31 players will be able to pick one of four tanking classes below if they started as a Warrior upon completing a series of class change quests. 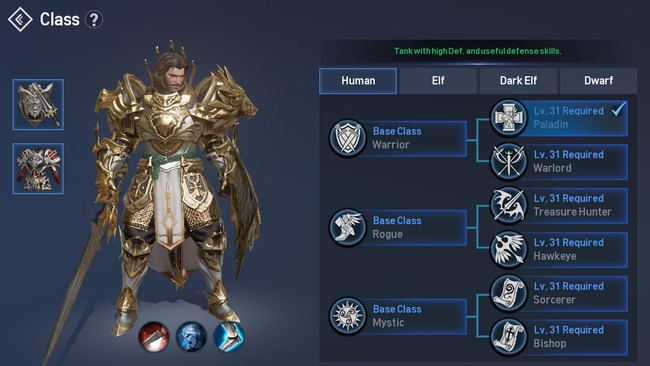 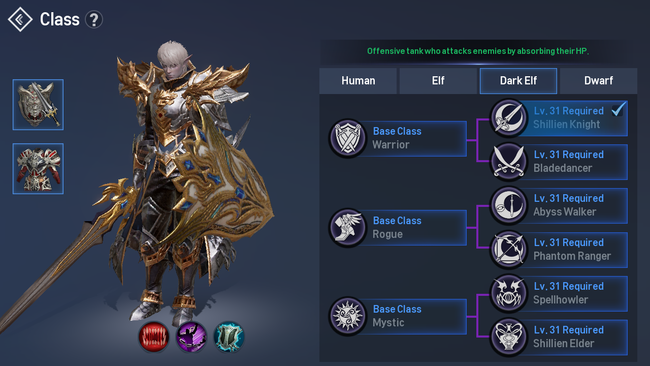 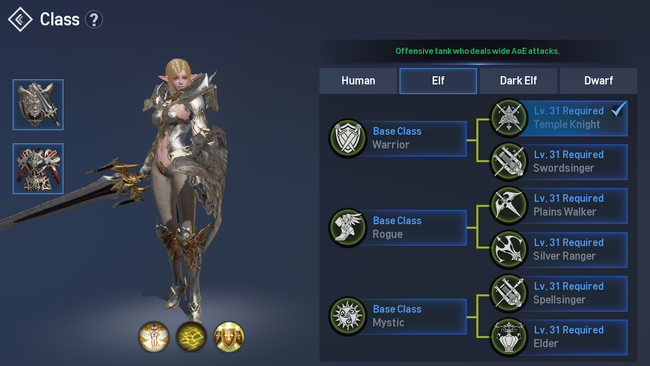 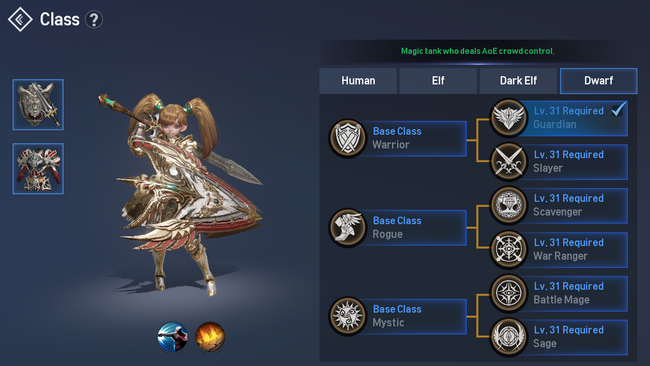 Lineage II Revolution offers a variety of healing classes and unique healing options, such as raw or "pure" healing and healing through regeneration over time. While each healer specializes in their own style of healing, all are adequate options for PvE content. Primarily seen as a "support" class, the Healer is incredibly valuable, if not essential, for PvP and late-game Raid content. At level 31 players will be able to pick one of four healing classes below if they started as a Mystic upon completing a series of class change quests. 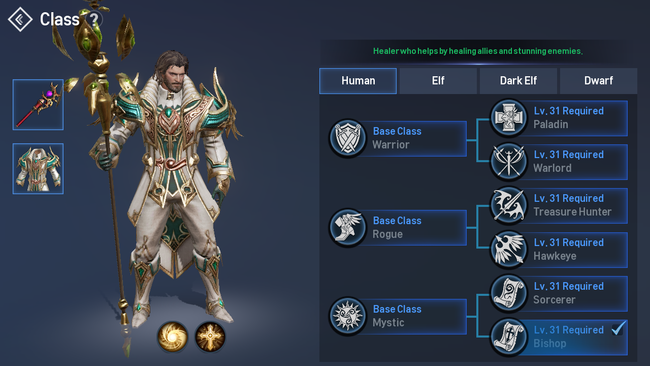 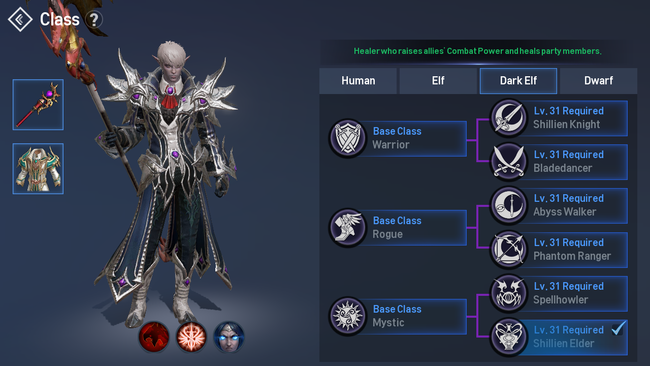 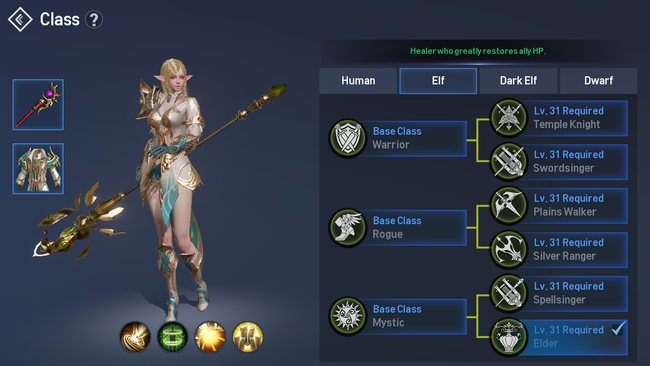 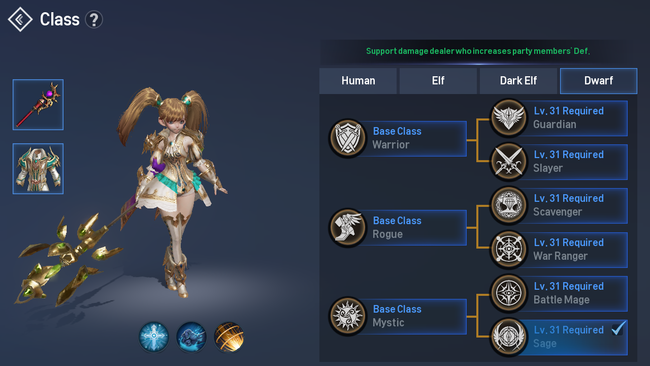 Several types of Melee DPS pepper this category, and each is divided into armor types. Heavy armor DPS can sustain more damage in comparison to their Light armor counterparts, but lack mobility. That being said, for those looking to deal a fair amount of damage and not rely heavily on healing potions, one of the Heavy armor DPS classes might be for you. Those that want to specialize in both damage and provide parties with invaluable status amplifying buffs should look into the Dark Elven Bladedancer and Elven Sword Singer. At level 31 players will be able to pick one of several Melee DPS classes below if they started as a Warrior or Rogue, depending on the class itself, upon completing a series of class change quests. 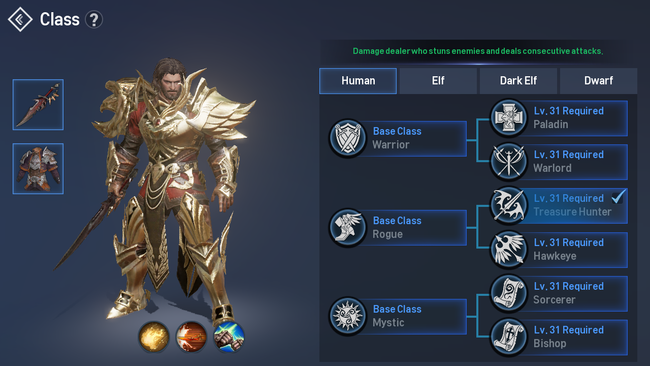 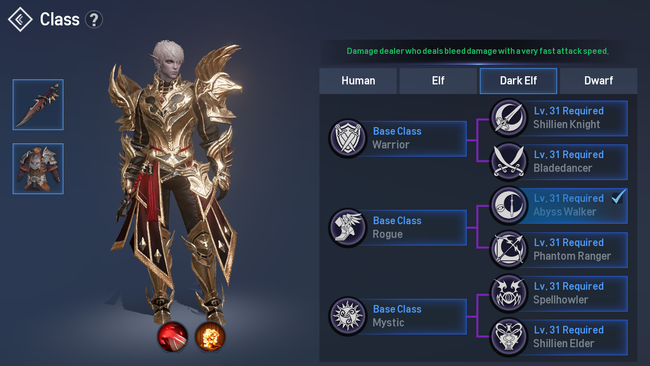 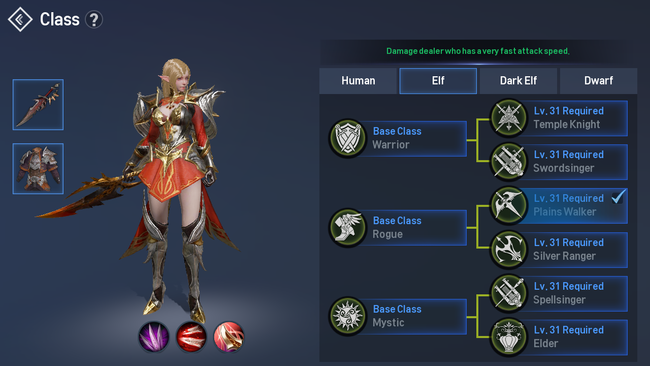 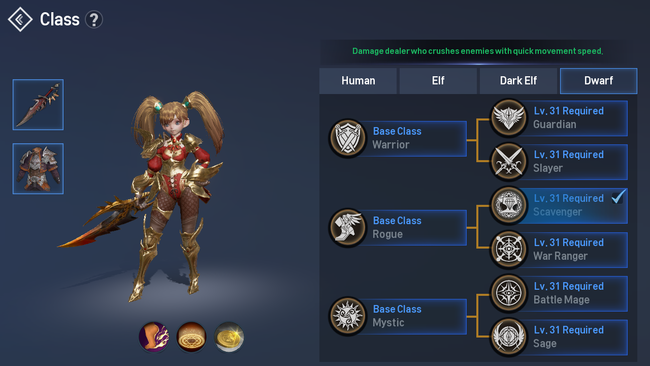 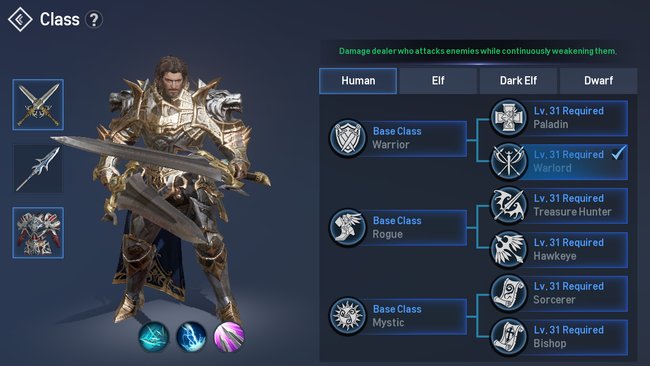 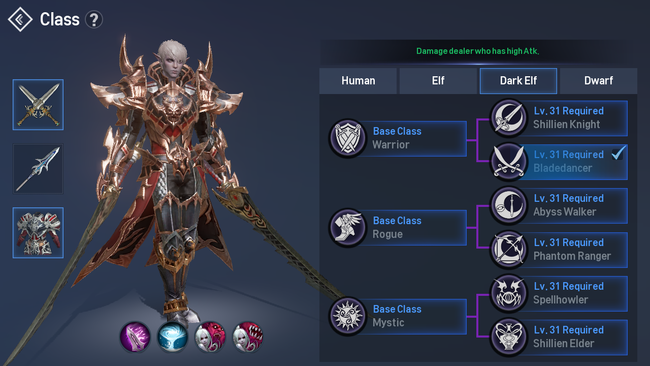 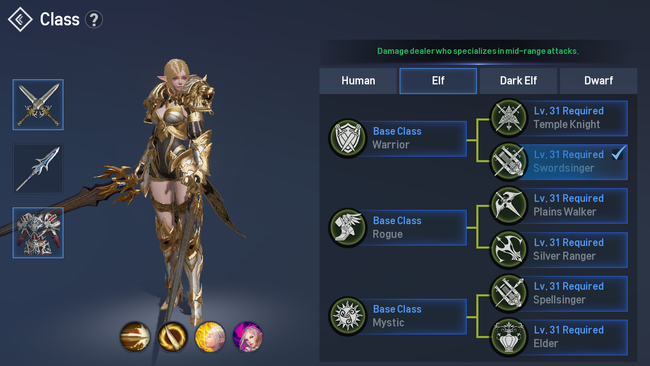 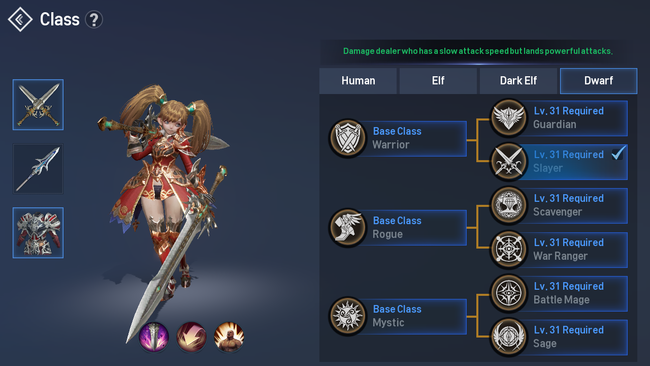 There are two types of Ranged DPS in Lineage II Revolution - physical and magical. For those looking to take the path of any of the ranged physical DPS classes or archers, players should select the Rogue as their starting class.And for those that want to branch into magical DPS, the mystic should be selected. While each has their own areas of expertise, both are incredibly adept at dealing incredible amounts of damage. At level 31 players will be able to pick one of several Ranged DPS classes below if they started as a Rogue or Mystic upon completing a series of class change quests. 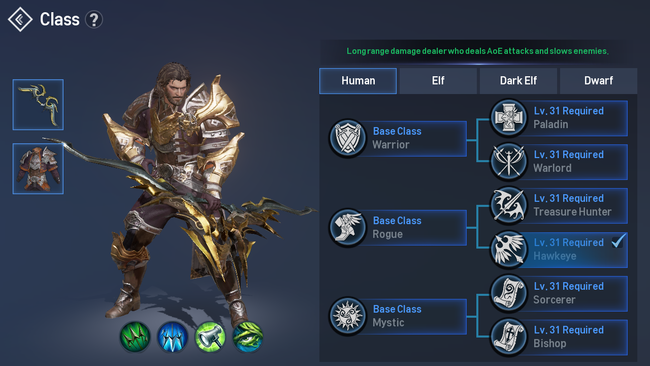 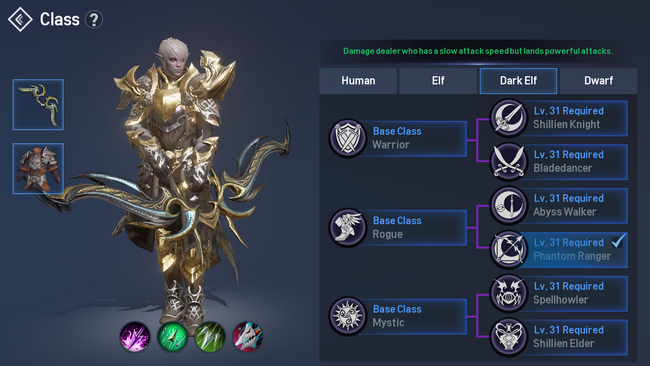 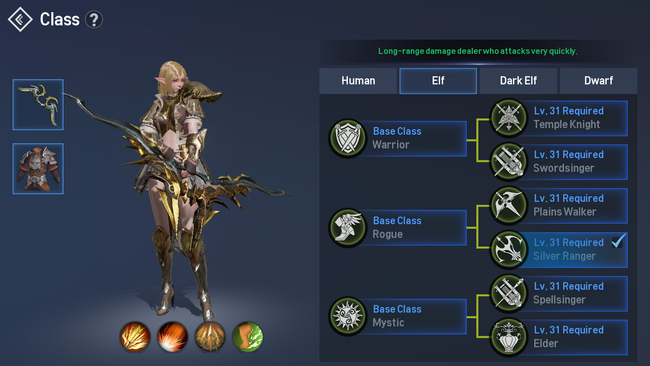 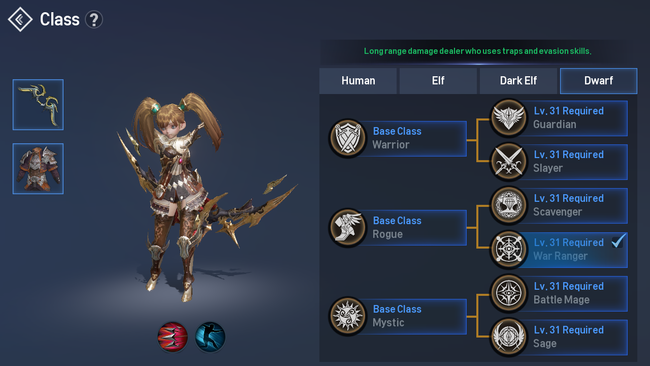 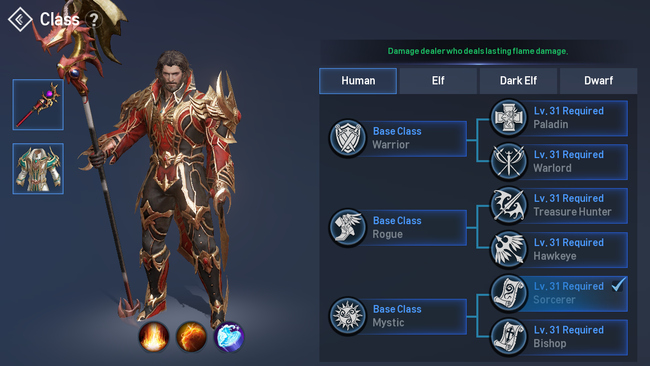 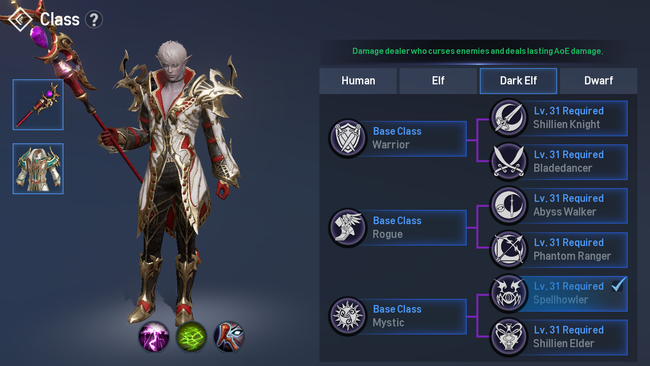 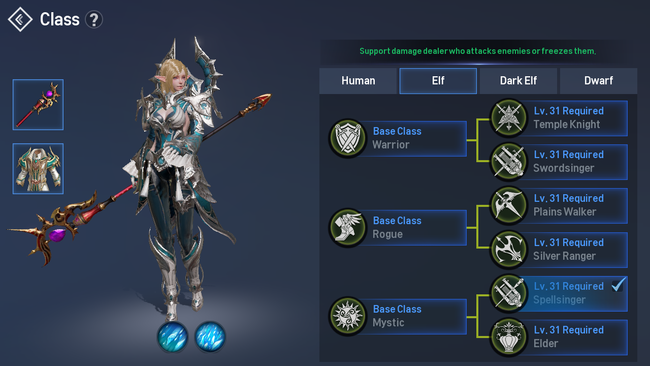 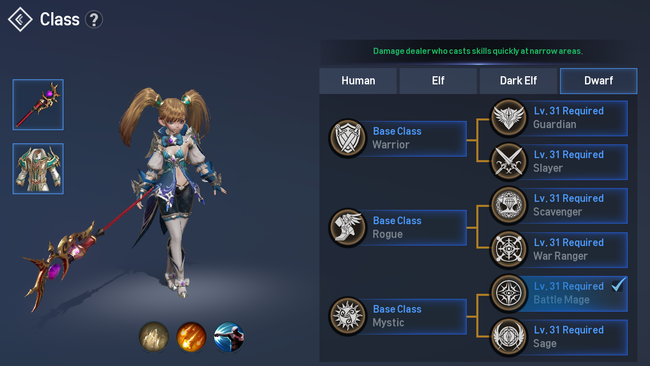 If you have any questions about how to access the Specialized Classes or what class might cater best to your intended playstyle, feel free to leave a comment below and someone will answer your question or provide insight!

Trials of Mana Class Guide: best classes, class 4 and how to change and reset your class 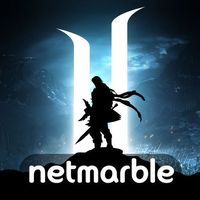