Monster Hunter World Herbivore Egg & Wyvern Egg Quests: where to find monster eggs and what to do with them

The living ecosystem of Monster Hunter World has everything you'd expect from its wildlife - including monster eggs that some of the creatures in the world will protect, as any animal would its offspring. That's a little bit awkward for them, however, because the commission is in town and there are some great rewards in store for hunters who can bring back monster eggs intact.

These eggs can be found out in the wild while on expeditions but also are sometimes part of the objective for certain optional egg quests. Eggs generally fit into two different kinds: the Herbivore Egg, belonging to the more docile plant-eating monsters, and the Wyvern Egg, which of course belongs to the bigger, badder monsters - the kind that'll eat a hunter if they're given half the chance. Here's how they work, plus how to find them since they're carefully hidden and don't just drop from monsters...

If you're more interested in hunts than egg heists, we've got more tips for you: 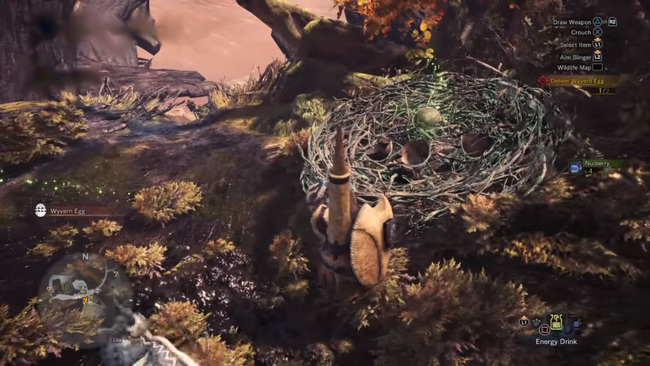 What to do with Eggs in Monster Hunter World

Okay, first up - what if you haven't been given one of the egg quests? If you somehow manage to get your hands on a Wyvern Egg or a Herbivore Egg (and if you want to know where and how, we'll cover that in a moment) - what do you do with them? Well, eggs are a little different to everything else you gather in Monster Hunter World, and in a sense their setup is something of a call-back to older Monster Hunter games - you actually have to deliver them.

What that means is you need to pick up eggs but then travel back across the map to a camp. When at a camp, you can deliver the eggs to the homebase box. When you then choose to return to Astera the eggs will be counted as part of your loot and you'll get any associated rewards including research points for the monster in question and materials for crafting and food.

While carrying eggs, be careful. Be careful of things like dropping from a height, rolling around or attracting any negative attention that'll lead to getting attacked, since being knocked around by a hefty monster is never good for the egg. Watch your stamina meter, too - don't let it run down completely. If you push your luck too far, the eggs will break, and then they're worthless. Be careful! 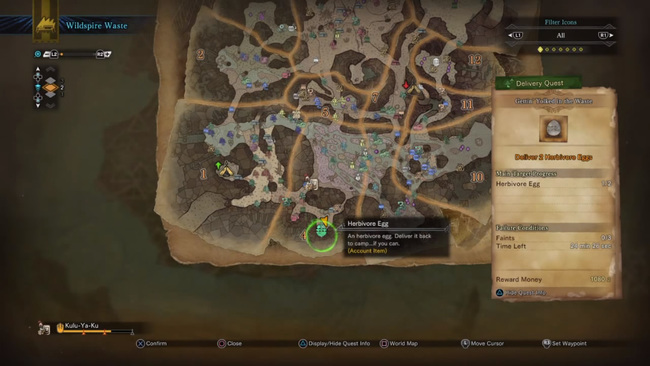 Herbivore Eggs & Wyvern Eggs in Monster Hunter World - how to find them, and what to do

Right from when you're first introduced to the Ancient Forest for your earliest quests and hunts you'll notice that each of the biomes in Monster Hunter World has its own slate of wildlife, and while you'll no doubt spend a lot of time worrying about the big, crushing monsters like the Anjanath you'll also encounter a lot of friendly herbivores who won't attack you and really just mind their own business. Herbivore eggs are stored and hidden by these monsters near to where they hang out, and so the first step to finding some herbivore eggs is to find some of the monsters in question.

If you track down a group of herbivores, a good idea is to just stay a little way out of sight and watch the plant-eaters as they graze around. Usually they're hanging out relatively close to their nest, and if they're not they're likely to roam about and get closer to the nest, checking up on it from time to time. Every map in the game is slightly different in terms of the available creatures and their habits, but they all do as a rule stick relatively close to their nests. This is tracking 101: follow the herbivores, then search the areas they visit for nests.

When you find a nest it'll be relatively obvious, and it'll be something that'll then be marked on your map. Your scoutflies will mark it out when you get close, too.

For Wyvern Eggs the situation is much the same: find the monster you're trying to track eggs for and keep watch on where it patrols, searching for where it makes its nest and thus where you'll find its eggs. It's absolutely key with Wyverns to be a little more careful about the stealth aspect, of course, since many of them will be aggressive on sight if they think you're encroaching on their territory. In many cases with Wyverns it may actually be easier to kill them first while on an expedition in order to grab their egg - they're so aggressive that it can be hard to get an egg back to camp safely.

If you're not doing that however, when you find a nest, stop. Don't grab the egg straight away. Sharpen your weapon and heal up and be prepared - once you actually soil their nest by touching it, even those previously-friendly plant-chomping animals will turn on you and get mad. Be careful to make your escape, and remember stealth can save you a lot of trouble here: the gillie mantle is your friend! 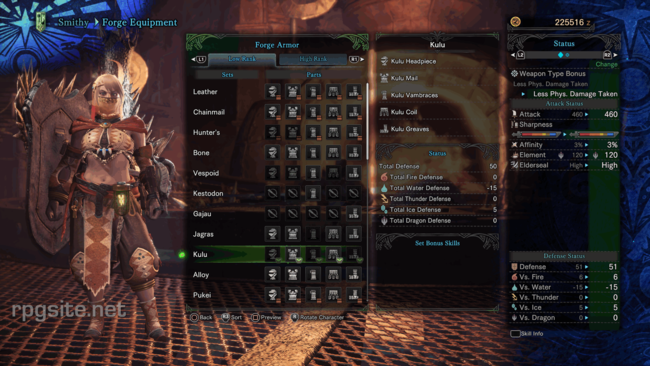 If carrying the Herbivore Egg or more likely the Wyvern Egg without getting it destroyed is too difficult for you, there's an armor skill that can help called Pro Transporter. This armor skill essentially lets you perform transport quests where you have to carry an item out in the open more easily - making it much easier to carry eggs around the map and dodge the monsters chasing you to get their eggs back. This skill is also useful for transporting Lumps of Meat in the Meat of the Matter quest.

The Pro Transporter armor skill can be found on the Kulu Ya Ku's "Kulu Vambraces" armor. All versions of the armor piece in both Low Rank and High Rank come with Pro Transporter, which increases your running speed while transporting items like Wyvern and Herbivore Eggs and helps protect against dropping them! This armor piece is an absolute must if you're having difficulty finishing these egg quests. It'll save you lots of time and even more frustration.

Grab this item and make egg-carrying a whole lot easier - you won't regret it!