A major part of the Comrades 1.2 update, a component of Final Fantasy XV's Patch 1.23, is the addition of a chocobo raising system. Once you've progressed the initial Comrades storyline in 1.0 up to the point where you can shuttle to Galdin Quay, head instead to the upper level of Lestallum. Tucked away to the left you'll find the black chocobo chick from the main game all grown up, and interacting with it will lead you into the new content introduced in Comrades 1.2

Looking for other Comrades related guides? We have a list of weapon details here, as well as where to find the best materials. 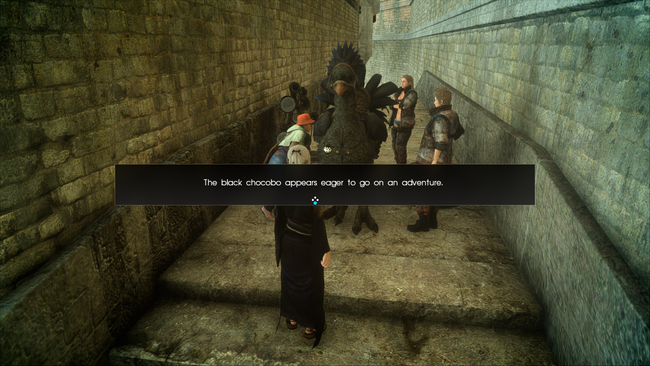 Once unlocking the new base at Cape Caem, you'll unlock a stable in which you can capture and raise up to ten chocobos. You'll also gain access to the Chocomostro, which is a variant of the arena found in the base game, only you'll be fielding a party of four chocobos in order to earn rewards.

The first step is to capture some chocobos to start training. After unlocking the chocobo stables, capturing chocobos is as easy as taking specific quests from Monica. A rotating quest will be randomly assigned a chocobo reward, indicated by a chocobo icon next to the quest's stated level. Simply clear the quest to be awarded a random chocobo of a random level. 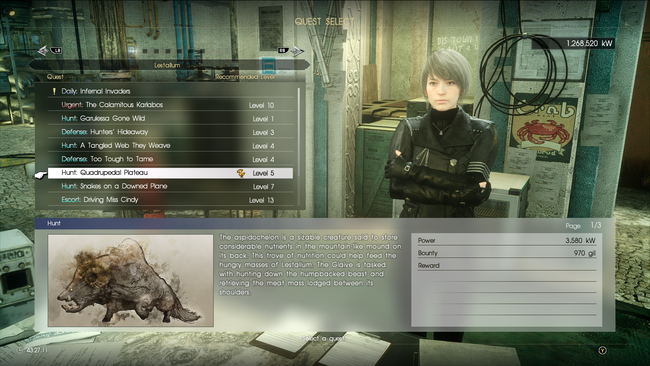 There's a bit of RNG involved in the type of chocobo you end up capturing,  but as far as I could tell, the capture itself is guaranteed upon completion of the quest. If you gather more than ten chocobos in your stables, you'll be asked to release one if you end up capturing past that cap.

Once you have a steady stable of chocobos from doing a handful of missions, it's time to start raising them up.

Raising chocobos has two purposes in Comrades. One, chocobos that reach certain thresholds in Stamina, Jumping, or Speed will be able to uncover new portions of the map, leading to new Royal Sigils or weapons. Second, higher level chocobos will be able to win tougher fights in the Chocomostro, leading to unique and powerful rewards. 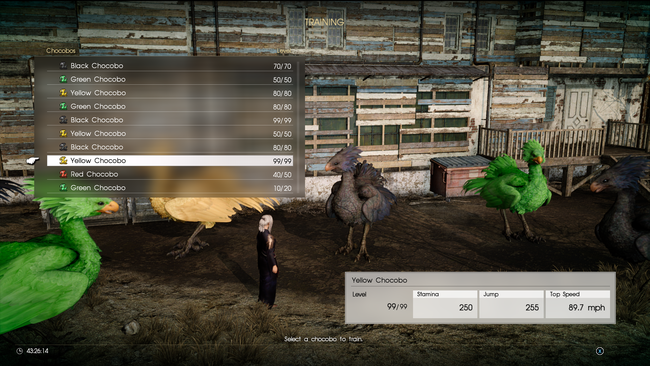 If you press Triangle/Y on a given chocobo, you'll be given two lines about it as part of its description The first will tell you its maximum level, the second will tell you its special attribute (or lack of one).

In order to reach past every ten levels, you'll have to meet a certain threshold for the chocobo's Stamina, Speed, or Jumping ability. It's very similar to reaching a threshold for weapon upgrading.

If you reach the stated max level with the requisite stats, the chocobo's max level will increase. Though certain chocobos can't exceed a certain level no matter what stats they acquire. Here's the absolute top level for each chocobo description.

For most cases, level 70 chocobos and above can succeed in the arena and uncover most of the necessary map nodes. But you'll want a level 99 chocobo in order to gather the Pure Admantite, which unlocks the Pulse Bow weapon. The adamantine requires over 200 Jumping and Stamina as well as a very high speed stat. You'll also earn the Chocobreeder trophy if you reach level 99. 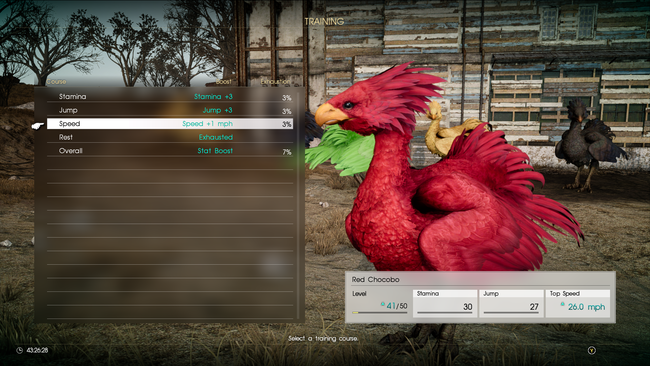 In order to level up your chocobo, you'll have to specify the training type: Stamina, Jumping, Speed, or Overall. Each time you train a stat, your chocobo's level of exhaustion will increase. With a higher exhaustion level, your chocobo will earn more stats for each training session, but also has an increased risk to injure themselves. An injured chocobo must spend some of their training time resting, which can hinder your stats or chance at reaching max level if your bird gets injured too often.

At every ten levels, it is not possible to get injured, so when reaching each threshold, its a good idea to do the riskiest training session for the greatest boost without actually injuring your chocobo.

After each training session, it's also possible to earn slight bonuses based on the bird's attributes. For instance, you might earn extra stats in the ability you just trained, or your chocobo might naturally decrease its exhaustion level. It's also possible that you'll get a note about the next training session either being more or less efficient.

If you end up messing up a bird's stats and want to bail out, you can always close the game without leaving the training menu to effectively reset the training. The game won't save itself until you back out of the training session, so this is a way you can mulligan out of some bad RNG if you have to.

The second line will give an idea on how well the bird will take to specific kinds of training. Due to the RNG involved in Chocobo raising, it's not 100 percent clear how exactly these affect Chocobo stats, but here's our best estimates on what each description actually affects the chocobo's training ability:

Once you've raised 4 chocobos up to max level (we recommend level 80 or 99 chocobos), you are in a good place to tackle the Chocomostro. Here's where the color of your chocobo will play a role, each chocobo will be able to cast a spell that corresponds to its color: Yellow will cast Thunder, Green will cast cure, and so on. In general, we found it best to slot one Green chocobo with 3 others of your choosing, specific elemental effects can be used to min-max for certain fights, but isn't really necessary in order to earn the rewards. 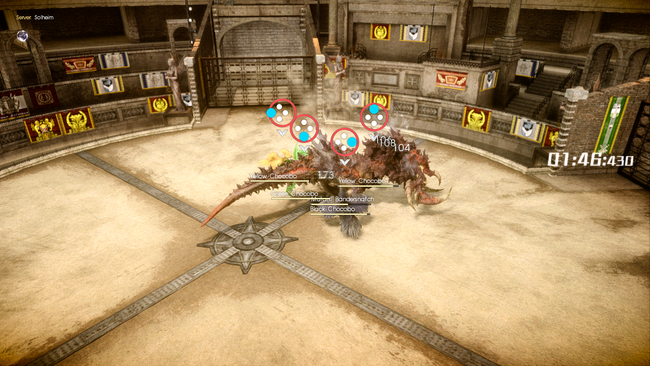 The stats that your flock earns from their stable training not only determines what paths they can unlock on the map, but also determines their stats in the arena. Each point of Stamina will increase your chocobo's HP, while each point of Jump will convert into your Attack stat. 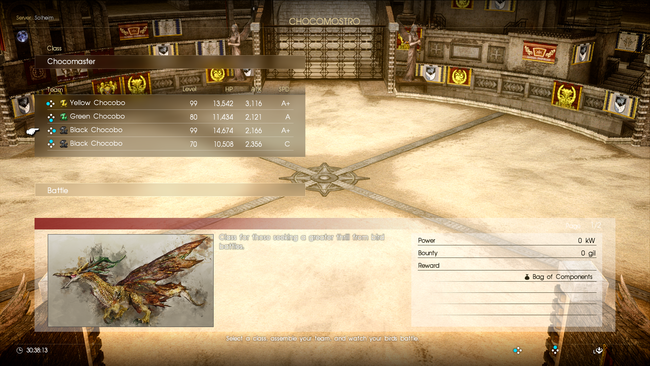 The Diamond Ingot is a very efficient HP boosting weapon component, and the Rare Coin will increase your earned exp by 20% by imbuing any weapon with the "Good Fortune" modifier. Since Comrades 1.2 increases the level cap to 99, this can be very useful for those wanting to earn extra exp towards the new cap. Bandit's Blades and Rusted Shield are weapons uniquely found in the Chocomostro.