Greedfall is an RPG that uses a faction system. Factions aren't exactly an inventive component on their own, but Greedfall uses its five factions in a few unique ways. Mainly, most sets of gear are clearly stylized as belonging to one of key groups, such as pelts and furs belonging to Native gear sets, doublets often belong to the Congregation of Merchants, and robes belonging to the priests of Thélème.

In order to disguise yourself or your companions as any one faction, you'll have to change your chestpiece to an armor set of the faction you want to be disguised as. Only the chestpiece matters, boots, headgear, or weapons can remain whatever you fancy.

Each colonial faction also has their symbol adorned to one of the various capes that De Sardet can wear. Capes don't play a role in disguises, but you can pick whichever style you like most, or change it up as you wish.

Left to Right: Thélème, Bridge Alliance, Congregation of Merchants, Coin Guard, Nauts.
Natives do not have a cape. 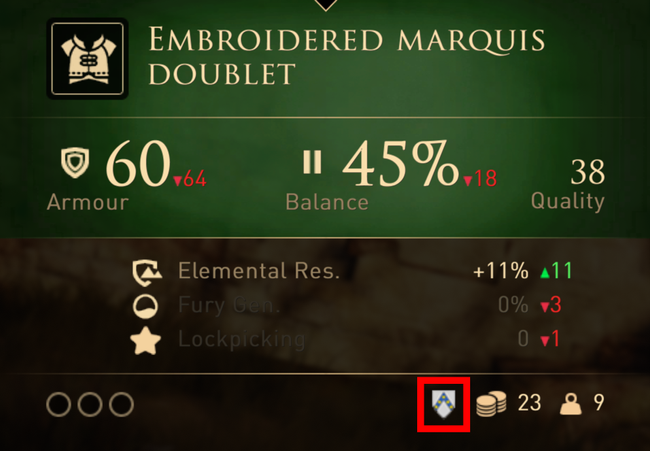 To be able to check which faction a piece of gear belongs to, simply check in the bottom right of the item's tooltip. Most chestpieces belong to a faction, and it'll show up here as a symbol next to the item's value. In case you're not sure which symbol denotes which faction, well, read on..

Thélème, the priests and inquistors out of San Matheus, are symbolized as a glowing red sun. They are the only faction to use red anywhere in their logo or symbol, so they are very easy to pick out.

The Bridge Alliance's logo consists of vertical stripes of Blue and Green with the emblem of a lion adorned on top. The natives will endearingly call the Bridge Alliance "lions" in response to the design.

The Congregation of Merchants, De Sardet's neutral faction, is symbolized by a band of coins arranged in a fashion resembling an upside-down V. While the icon for the faction (both in the gear tooltip as well as New Serene's Governor's Palace) show a blue stripe against a white background, the cape itself is still blue.

The Coin Guard, the mercenary force working underneath the other factions, is symbolized as two crossed weapons against a grey background. You'll see this symbol on any of the Coin Guard barrack buildings, and potentially in other places depending on your decisions in the game.

The seafaring Nauts are symbolized with a sort of wreath underneath a sailor's compass. This is an important icon to recognized because many of Greedfall's quests involving disguises requiring you to hide away as a Naut Sailor. Make sure to keep a spare outfit handy.

Native gear is symbolized as a kite-shaped diamond with a swirl symbol inside. Natives are not a unified faction, so it doesn't seem like this icon does much other than identify Native-designed gear, but it's still nice for players that want to gear Siora in faction-appropriate armor or wear some themselves.