Greedfall - How to get the best result in Treason! and survive the coup

About halfway through Greedfall, the Coin Guard will attempt a coup on the lives of the Governors of New Serene, San Matheus, and Hikmet. This is a critical quest that has direct implications on your playthrough and even the possible endings you can get. It's one of the most involved quests in the game that can be difficult to navigate your first time through. This guide will outline the key factors of the quest, when it occurs, and most importantly, how to get the best result.

This guide will contain minor spoilers. 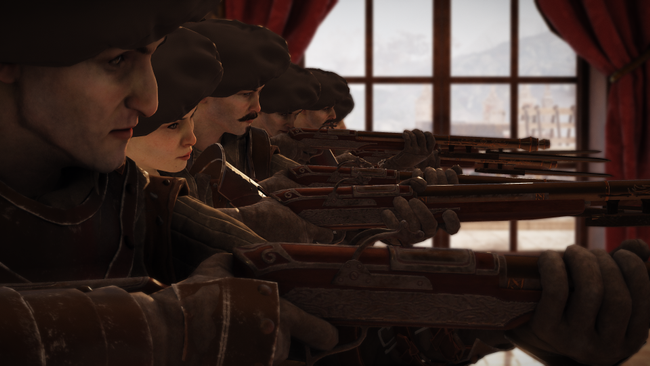 When does the coup take place?

The coup takes place at the end of the quest "The Prince's Secret", which in itself is at the end of a quest chain called "An Ancient Secret", which starts automatically after "The Battle of the Red Spears". This can come as a surprise to those that run into the coup unexpectedly when returning to Constantin to report on what they've learned from the Naut Admiral.

If you're not ready to deal with the coup and want to put off undertaking "Treason!", simply do not report to the Naut Admiral to learn about De Sardet's history. Having a save here can be important if you want to make sure to get the best outcome, or potentially all the possible Achievements/Trophies. 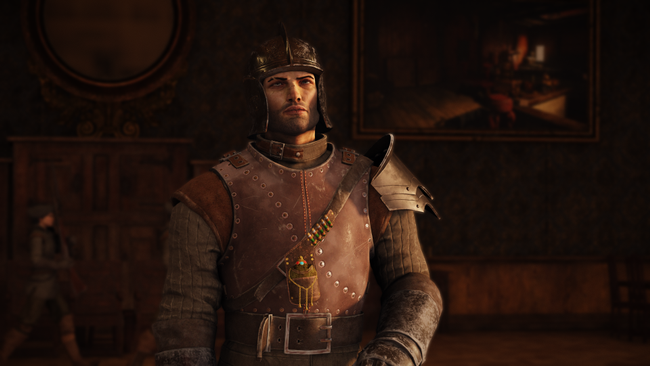 Kurt - how to keep him alive

The first major split in the quest involves your first companion character, Kurt. Depending on your reputation with him, he may lead the coup and force you to fight him, or he may help assist you against his fellow Coin Guard.

Whether or not Kurt survives depends on whether you've completed his first two character quests.

If you haven't completed both "Missing in Action" and "Amongst the Ghosts", Kurt will lead the coup. In this case, you will have to fight him. Once defeated, you will have a choice to execute or spare him. The choice doesn't seem to matter, because the result is the same either way. 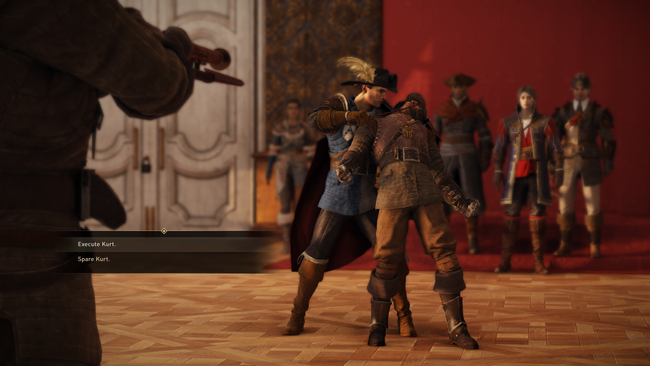 If you have completed both of the above, he will instead defect to your side and survive the coup. If you need help boosting his reputation, simply complete his first two personal quests and before finishing "The Prince's Secret". 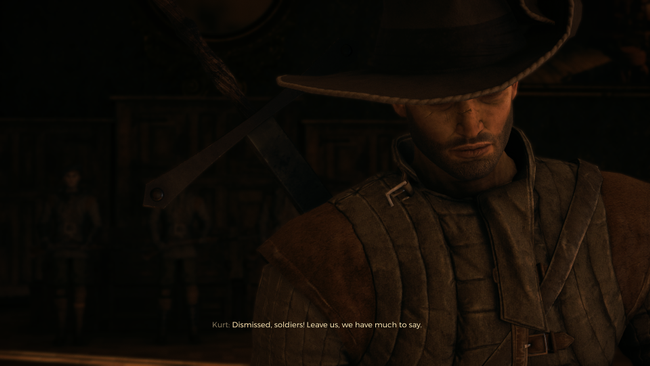 After the fight with Kurt (or avoiding it), you'll have to clear out New Serene's Governor's Palace. This part is mostly the same regardless of the outcomes leading up to here, with a few minor differences. If Kurt is alive, you'll have a few less guards to deal with, otherwise you'll have to fight a bit more to save the two diplomats in the palace along with Lady Morange afterwards. 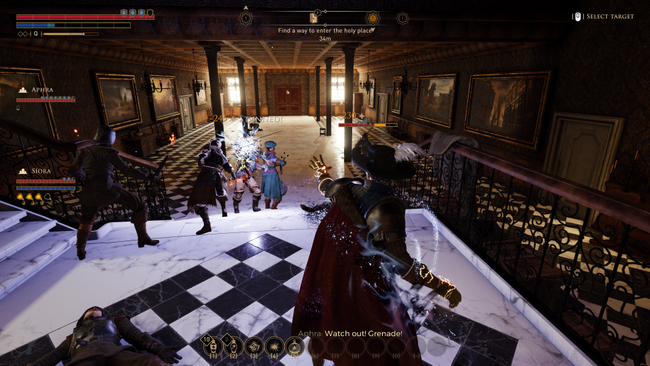 If Kurt is Alive: After saving Lady Morange, you'll have to speak to two messengers to warn the cities of San Matheus and Hikmet. One of the guards will have to be convinced with a bribe or with a little intimidation.

If Kurt is Dead: The above step will be skipped, and you'll be tasked to enter the Coin Barracks. 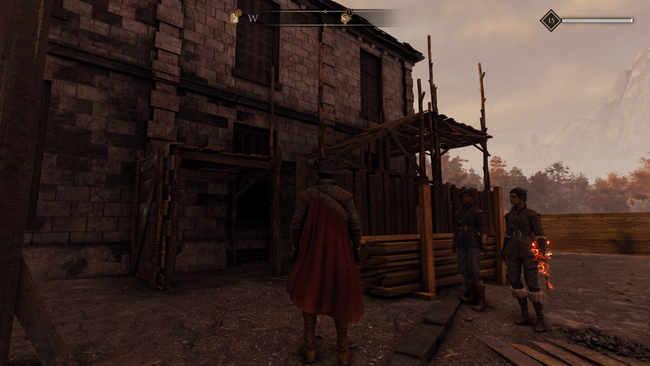 To enter the barracks, you have a few options. You can either go through the front gate, through the tavern entrance, or through the higher entrance via the scaffolding on the backside of the building. The last option is the best if you want to complete this section non-violently.

If you take the scaffolding entrance, your entire party will need Coin Guard disguises. This is because you'll run into a group of recruits soon after entering. If you're not properly disguised (or if you have Siora with you), you'll have to fight the recruits, ruining your chances of completing the mission with as few casualties as possible.

If Kurt is Alive: You'll automatically bypass the recruits, assuming you're properly dressed.

If Kurt is Dead: You'll have to pass a Charisma or Intuition check.

After scouting the commander's office, you be given the chance to apprehend his three top lieutenants. While two of the soldiers can be convinced to turn themselves in, one of them will always fight you, again ruining your chance to complete the mission stealthily, and you'll lose 1 Coin Guard reputation.

Note: It seems like it is still possible to catch Torsten if you end up having to fight this lieutenant, as long as you do not trigger many other fights.

So if you want to catch the commander, ignore apprehending the lieutenants. In our testing, it does not seem possible to capture both them and Torsten.

Update: It actually does seem possible to capture all three lieutenants and still capture Torsten, though the exact conditions are not 100% clear. Best chance at accomplishing both tasks seems to be entering via the tavern and working up the building, apprehending the upstairs lieutenant last, then entering Torsten's office, and exiting via the main door. 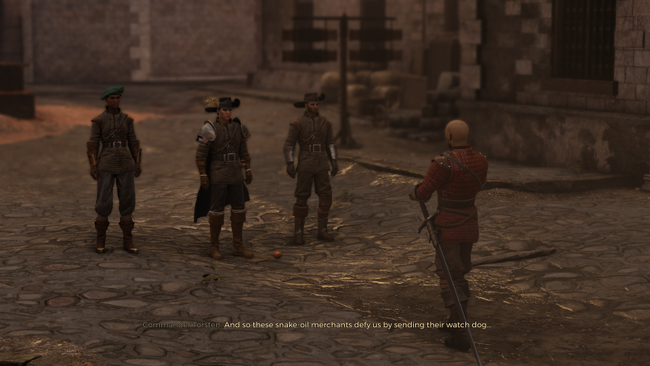 After searching through his office, you can catch Torsten in the front of the building. This is seemingly only possible if Kurt is alive. Simply defeat him to end the quest, and earn the achievement Missed coup. 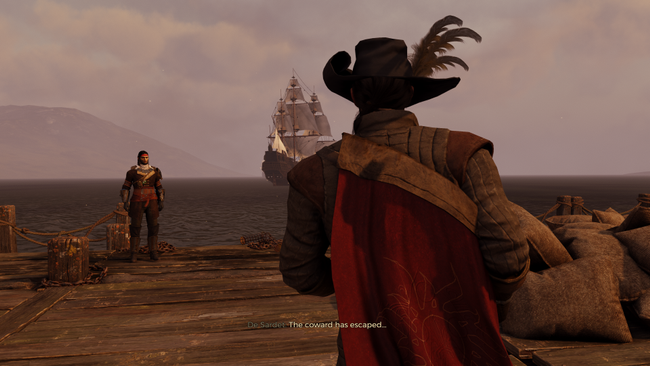 If you ended up having to fight the recruits or lieutenants, you'll likely end up having to chase Torsten to the docks, and he will escape. After this point, the quest again splits depending on if Kurt is alive or not:

If Kurt is Alive: The quest will end, and you'll report your failure to Constantin. We did not play past this point in our testing to see how and if this affects things later down the line, but there are no achievements past this result. You'll still earn Missed coup.

If Kurt is Dead: Since you were unable to warn the other cities in the case of Kurt's death, this is where things get interesting. You'll have to choose to save either Hikmet or San Matheus, in what is likely the most consequential choice in the game. 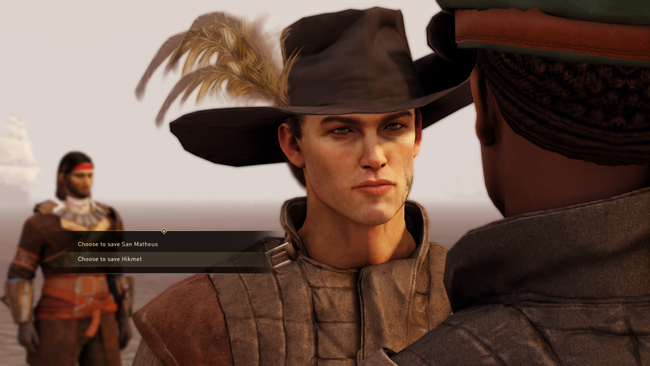 Choosing who to save

The result of failing to save one of the two cities will have some dire consequences: 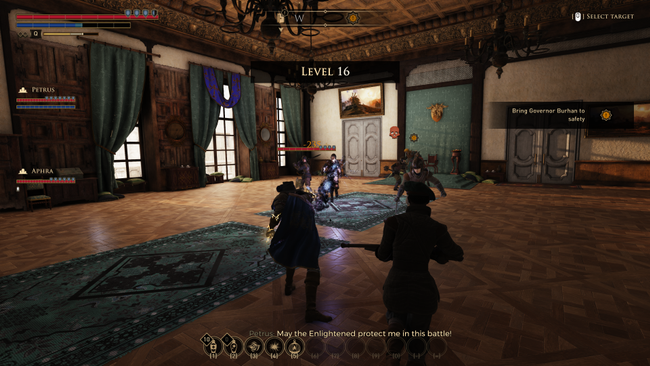 If you choose to save Hikmet, you'll automatically be transported to the city. After fighting the guards outside, you'll be given a key to enter the Palace via a secondary entrance (Dialogue check or have Aphra with you). After the few fights, you'll save Burhan. Note that it is possible for him to die if you're not quick enough, but this will force a fail state and you'll have to try again, the game won't continue if he does. 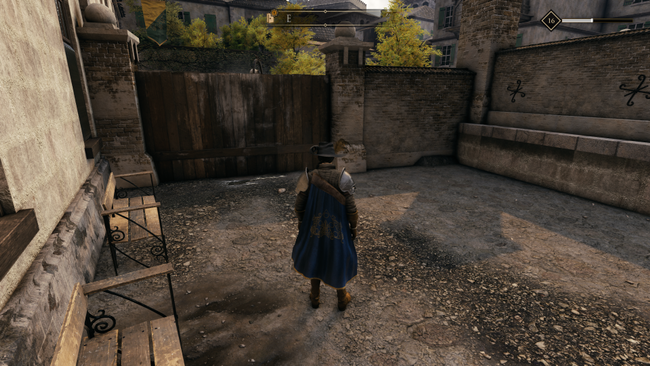 You'll be given a secondary objective to save the Alliance's supplies in the city's research building. If you enter silently via a side entrance (pictured above), you can earn an additional reputation point with the Bridge Alliance. Otherwise you'll just get the standard +3 for finishing the quest. You'll also earn the achievement A preserved Alliance. 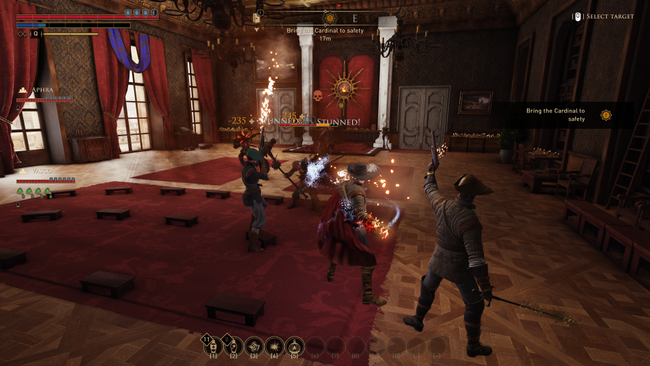 This is nearly analagous to saving Hikmet above, and the general progression is the same. The additional task here if far simpler than having to save the supplies in Hikmet, simply clear out the palace before anyone dies in order to get the extra reputation point. You'll earn the achievement In the name of the Enlightened!.

In either above case: You'll earn the achievement Betrayal in Blood for having to kill Kurt. Note that you do not get this until the end of the quest, so don't expect it as soon as the initial fight is over.

Getting all Achievements in Treason!

This is what you'll need in order to earn all possible achievements in Treason!

Or you can simply do the above in multiple playthroughs.