If you haven’t heard in our review, Nioh 2 is a great game. It’s also a game with a lot of complex systems. A lot of these are there to help you out with your travels, like the Blacksmith. One of them, however, isn’t unlocked from the start of the game and it offers you very interesting services that interact with both the online and offline aspects of the game.

This is the Hidden Teahouse, a returning facility from the first game. Run by the same NPC, this place allows you to trade for items, engage with the Clan system and more. Here, we’ll tell you all you need to know about it.

How to unlock the Hidden Teahouse

Don’t let its name fool you, the Hidden Teahouse is actually very easy to unlock. Just like many of the other systems of the game, you will automatically unlock this one by progressing through the main story. I will most likely take you a while, however, since the level you need to beat in order to unlock it is the first one of the third region. This is nearing the halfway point of the main story, so you’ll be playing for quite some time before you can start engaging with the Hidden Teahouse.

How does the Hidden Teahouse work

The Hidden Teahouse offers you a lot of different services, but almost all of them involve spending Glory. This is a special currency that you can get by either playing online with other people or by defeating Revenants. With that in mind, here’s what you can do at the Hidden Teahouse: 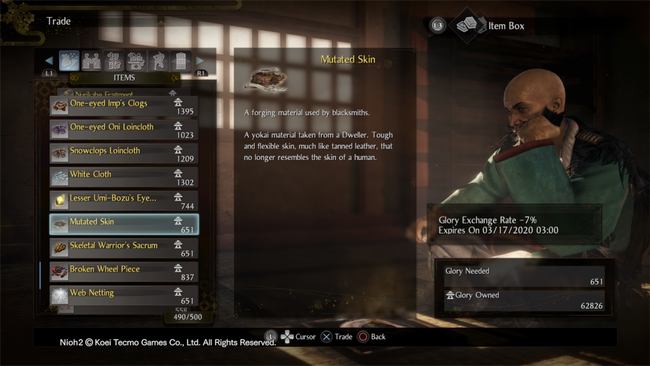 One of the most useful things the Hidden Teahouse has to offer is the ability to trade Glory for items. There are five different categories of items in store, some more important than others.

First you have a general list of items that, besides including powerful healing items or useful amulets, has almost every forging material that can drop from an enemy, including bosses. This makes farming for Glory and then trading at the Hidden Teahouse a less painful alternative to fighting the same boss over and over. Then you have skins with allow you to Transform into other NPCs and have no benefit in terms of gameplay; this is only cosmetic. You can also trade Glory for Gestures, which you can use when playing online to communicate or simply to goof around. There are two different lists of equipment, a cheap one and a more expensive one, which allow you to spend Glory to get a piece of certain rarities. Finally, you can buy Hanging Scrolls for your Hut, although this has no gameplay benefits and is also only cosmetic. 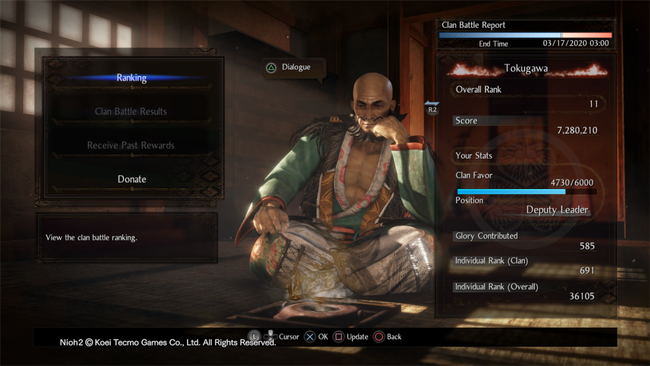 This is one of the many online aspects of Nioh 2. Here you can choose a Clan to join from a list of 42 different clans, each one giving your character two passive buffs. As such, there are many different benefits you can get from joining a Clan, from a set percentage to avoid death when not at critical health to increased attack depending on your equipped weapon. The list is very long but you should read all of them before joining a Clan. You can, however, change your pick after joining one, but only every 8 hours of real time.

Once in a Clan, you are immediately taking part of the Clan Battles. This doesn’t require you to do much: Clans are separated in Red and White groups, and the group that can get the most Glory within a week wins. As long as you’re playing the game and getting Glory here and there, you’ll be contributing to the battle. You can also donate items to get more Glory and other rewards. These rewards, be it from winning the battle or donating, aren’t key to progressing the game. They’re just somewhat useful items that you can still get just by playing normally and more Glory. 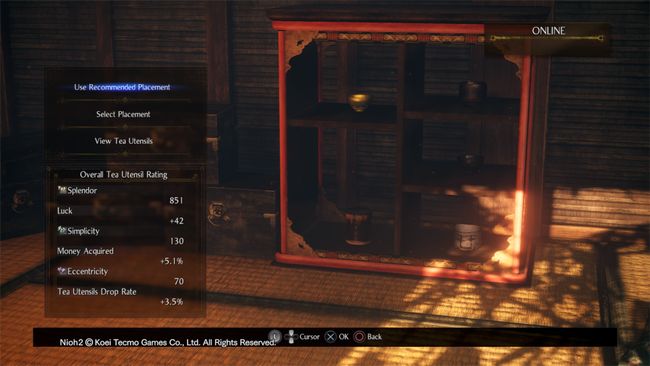 This is the only aspect of the Hidden Teahouse that doesn’t require Glory, and it’s a system that interacts with your Hut. After you unlock the Teahouse, enemies can start dropping these Tea Utensils that you need to appraise here. Once that is done, you can go back to your Hut and decorate it with your newly appraised Utensils.

Different Utensils will give have different values but what they affect is always the same: Luck, Money Acquired and Tea Utensils Drop Rate. Which ones you place in your hut will increase or decrease these values, but the easiest thing to do is select the Use Recommended Placement option. This will place the Utensils in the best way to maximize all three values.

Nioh 2 Sudama: how the Purple Kodama work and where to find them, how trading works when asked "it seems as though it wants something"