Although Dani has our full review for Story of Seasons: Friends of Mineral Town, we also were lucky enough to get our hands-on with the PC port for the game before launch. Our overall impressions for the game are positive, but how about the status of the PC port?

Story of Seasons: Friend of Mineral Town Requirements and Performance

Friends of Mineral Town's minimum and recommended requirements are very modest - the game officially supports integrated graphics, and chances are that your PC will run the game, regardless of how powerful it is. Partly because of this, I only bothered to test the game on my PC, instead of on both my desktop and my laptop.

The game's settings menu is pretty simple - maybe straightforward would be a way to put it? The options aren't super descriptive, and it would've been nice to have options for lower texture resolution or character model fidelity, but considering that the game doesn't even have a recommended specification - only a minimum specification - something tells me that anyone with a dedicated GPU from the last 5 years should have no problems running the game at 1080p/60. The game supports higher resolutions, such as 4K, but as far as framerate is concerned - the game is capped at 60FPS. Not a huge deal, but considering how easy the title is to run, it would've been nice if the game could've run at a higher framerate.

Unsurprisingly, my Ryzen 9 3900x/OC'd Vega 56 desktop handled 1440p/60 max settings perfectly fine, which shouldn't shock anyone considering the game's origin as a Switch exclusive, and the very meager minimum specs. I found no technical issues or glitches during my time playing it, along with no crashes. As far as the game's technical state goes, I have no complaints.

Friends of Mineral Town has a perfect implementation for controller options and rebinding support. Both KB/M and controller can be fully rebound, and the game features full Steam Input support - allowing for players to use icons that match their gamepad of choice. Players can also switch between KB/M and gamepad controls on a whim, with no issue. Nothing else to say here - this is one part where the PC port excels.

Except for the better graphics and resolution compared to the Switch release, and the above-mentioned control options, there's no PC-exclusive content to be found here. Of course, since the game is releasing day-and-date with the Switch's western release, you can't really complain about that. While it could have had an unlocked framerate, and more graphical options, but it's still a more-than-solid port. Anything else is nitpicking a port that otherwise has no significant issues to speak of.

Steam Code provided by the publisher. 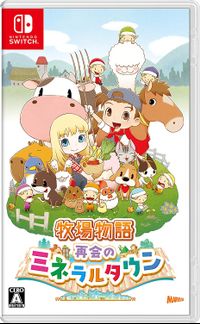