All three will be coming to Sony platforms. UPDATE: No plans for NA version of Tales of Graces.

173 screens of the latest addition to the Tales series.

New, unannounced RPG from Namco Bandai is a sequel. Whatever could it be?

Tales of Graces heading to Wii, and Tales of VS heading to PSP. One is a new title in the main series story, one is very similar to the successful Dissidia. 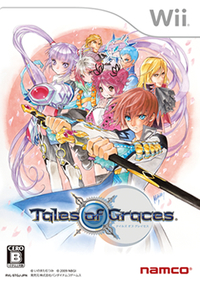