Atelier Meruru: The Apprentice of Arland

The third Arland game may be getting a Vita release as well.

Looks like American players will have to wait just a little longer.

The west gets another entry in Gust's popular alchemy-driven franchise.

A brand new trailer and a smorgasbord of screenshots await you within.

Atelier Meruru: The Apprentice of Arland 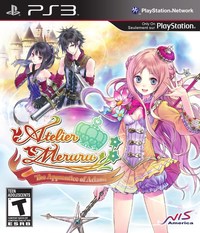