It has been almost a month since I had the opportunity to review Valkyria Chronicles 4, the latest in a series that celebrates its 10th anniversary this year. A couple weeks after we were allowed to share our thoughts on the strategy title, the game saw its eventual release on the PlayStation 4, Xbox One, Nintendo Switch, and PC.

This was a highly anticipated title for many reasons - not only was it the first entry in the mainline series to be localized since Valkyria Chronicles 2 (since we sadly missed out on VC3), but it was vital to gauge the health of the franchise after Valkyria Revolution's less than stellar reception. As you probably already knew if you took the time to read my review or at least its score rating, I was a pretty big fan of what Sega was able to accomplish even if it played things safe in some areas, perhaps to avoid another fan backlash.

On that note, representatives for Sega recently reached out to us at RPG Site and offered us the opportunity to interview game director Kohei Yamashita and producer Kei Mikami to do a little post-mortem so we can find out more about the conversation and design decisions that led up to the release of Valkyria Chronicles 4. I should note ahead of time that this interview was conducted via email, so the questions are rather cut and dry. With that in mind, here is my interview with Yamashita and Mikami. 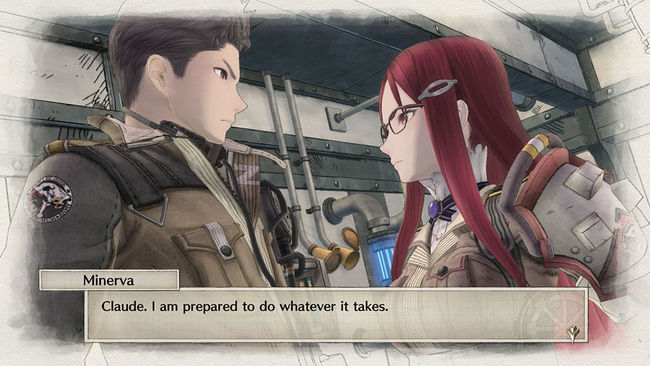 RPG Site: So, now that Valkyria Chronicles 4 is out in both the east and west, what has been the reaction been like and the type of feedback you're getting?

Yamashita: We’re ecstatic about the game’s reception. Since it’s been seven years since VC3, and 10 years since the first game on home consoles, many fans have welcomed the game with open arms. We’re happy that we could give them what they’ve been waiting for. The game has reviewed even more highly than we expected, both domestically and worldwide. Everyone on the team is glad that we got to make a sequel.

Mikami: Overall, the reaction has been positive, with a few comments saying that they were hoping for a more dramatic transformation compared to the last game in the series. It’s been an even longer wait for the western audience, as they’ve been waiting since VC2, but we received a higher rating than I’d expected.

RPG Site: One of the important features removed in the transition from Valkyria Chronicles 3 to Valkyria Chronicles 4 was the Master Table, which I personally felt was very innovative - giving the game an interesting class system. The reason given was that there were too many characters in VC4 to make this work on a technical level. Was there an effort made to begin with, and do you think we could ever see something similar to in the future?

Yamashita: By now, we’ve heard quite a lot on how VC3 hasn’t reached North America. (laughs) VC3 had comparatively few characters, so we tried to make sure each of them had flexible progression paths to choose from. We experimented with character progression by letting the player experience a variety of class options, which culminated in the Master Table.

VC4, however, features far more playable characters than VC3 did. The low number of characters in VC3 made it necessary to allow each of them to spec into various classes. This time, there were plenty of characters in each class, so we didn’t think there was a mechanical need for them to change into other roles.

Each character concept typically relates to their occupation somehow, so I felt it was slightly unfortunate to lose those connections in VC3. We had hoped to delve deeper into various character subplots, such as the Engineer who can’t handle Ragnaid, or a friendship between the Snipers. 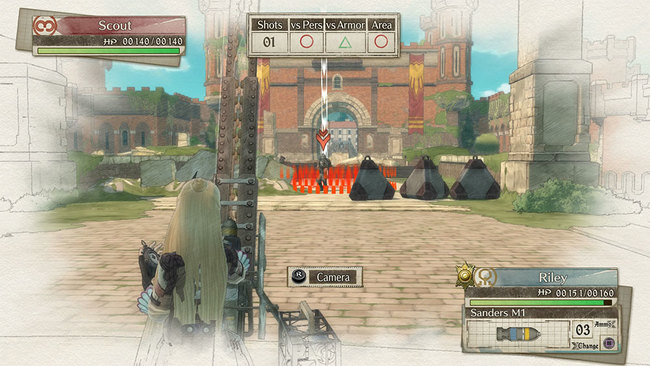 RPG Site: In Valkyria Chronicles 4, you added the Grenadier class to the mix. What were some of the challenges you face when adding a new class to the game?

Yamashita: The Grenadier class was conceived from a bug that occurred during VC1’s development. Tanks are only supposed to intercept infantry with machine guns, but there was a bug where they would fire the main cannon instead. The image of troops sprinting through a hail of artillery fire matched the battlefield motif very well, so we hoped to make that a reality in the game.

However, due to hardware limitations and the reduced map sizes in VC2 and VC3, we couldn’t make that happen. Now that the maps are much larger in VC4, it was our chance to bring that decade-old idea to fruition.

RPG Site: Is there any chance in a future update you could make Ragnarok the dog appear every time you request medical attention?

Yamashita: Karen would cry if we did that! I think you appreciate Rags more when he only shows up once in a while. If he came every time you called, you’d get sick of him. (laughs)

Mikami: Ragnarok is supposed to be more like an occasional treat. Please show Karen some love; she’s working so hard. (laughs)

RPG Site: Valkyria Chronicles 4 took on a slightly more dramatic tone than what people are typically used to from this franchise, with the stakes arguably higher than they have ever been for obvious reasons. What inspired your team to go in this direction narratively?

Yamashita: VC2 and VC3 were made for the PSP. At the time, Japanese PSP owners tended to be younger, so we emphasized simpler themes of heroism in the story, and tried to prioritize replay value.

For VC’s long-awaited return to home consoles, however, we believed that our audience would be an overall older demographic. To match that, the visual motif was adjusted to have a more uniformly military feel, and the story explores more morally gray themes about the meaning of justice and war.

Mikami: The rich narrative was well-received by longtime series fans. Considering VC2’s platform, it catered to a lower age range, but fans seemed to prefer VC3, which had a decidedly more serious tone. Additionally, VC4 is on the PS4, which caters to a higher age range. With that in mind, I believe we took an even heavier militaristic tone, depicting a story of young men and women at the mercy of war. 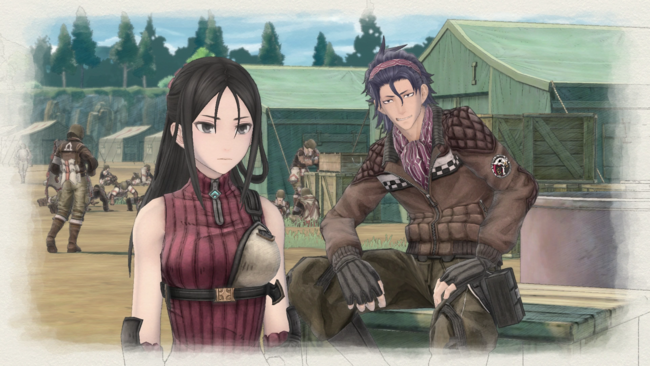 RPG Site: How do you balance the story with the number of characters you can recruit into your squad since VC4 has around 50? I imagine it can be challenging since they get introduced over the course of the game. I also noticed you really focused on giving each of them a personality with the Squad Stories.

Yamashita: We tried our best to make new characters without creating a bias towards any one class. Actually, in each Interlude, you might notice there will always be a character who isn’t yet in your current squad. We designed it so that the player would notice that these characters aren’t with them yet, and then bring them into Squad E afterward.

RPG Site: When Valkyria Chronicles was originally released, it inspired a lot of strategy games that followed thanks to its unique approach to combat and storytelling. Please explain what you think are the main pillars of Valkyria Chronicles' game design, and if there are any other games you draw inspiration from.

Yamashita: Back when I designed the BliTZ System, we had just scrapped a prototype battle system based on elements from other games. I was at a loss, so I decided to throw out the old concepts derived from existing games, and attempt to create a game where a squad and its members strengthen their bonds, growing into their roles as they gradually mature into a single fighting unit—just as they do in war movies and dramas like Saving Private Ryan, Band of Brothers, and Combat!. The result was the VC series’ “BliTZ” battle system.

RPG Site: Valkyria Revolution was seen as a bit of a misstep for the series and you looked to rectify that with the announcement and eventual release of Valkyria Chronicles 4. Some may have called it a risky endeavor that had mixed results. What were some of the things you learned that you took to heart for the development of Valkyria Chronicles 4?

Yamashita: Unfortunately, although I have been a main designer on the mainline VC series games, I was not involved with Valkyria Revolution.

Mikami: While I quietly accept the feedback about Valkyria Revolution being not quite up to par, I should note that it was a title created by the Valkyria Project, and is not a part of the mainline Valkyria Chronicles series.

I believe Valkyria Revolution was created to be its own series, and while it may have had its own issues, I wouldn’t call it a “misstep” reflecting on the Valkyria Chronicles series.

That said, there was definitely a lot we learned from developing on multiple platforms (PS4, Xbox) and implementing multiple languages. However, timing-wise, VC4 was started up during the development of Valkyria Revolution, so there probably isn’t much of a direct influence. 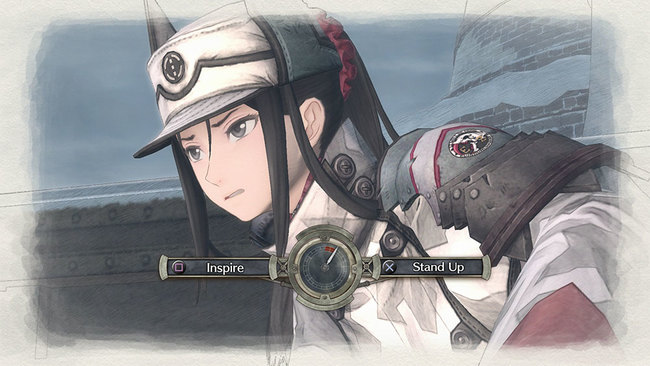 RPG Site: On that same topic, do you feel there's still room in the Valkyria series to try something like that again?

Mikami: Valkyria Revolution was created to provide a new experience to our VC audience, especially those in Japan, who have expressed an affinity for both action and RPG genres. I can’t say for certain if we’ll try such a drastic departure from the core formula, but we’d like to continue to strive to provide new experiences that are both emotionally moving and mechanically compelling.

RPG Site: This will be my final question. Now that we have crossed the fourth numbered entry in the Valkyria Chronicles series, where do you see the series going from here? We are facing the potential of new PlayStation hardware on the horizon, so I would love to hear hypothetically what you would like to implement if you had far more resources at your disposal. Feel free to dream as big as you want.

Yamashita: Now that’s the dream, to have unlimited resources! (laughs) I think my answer would depend on many variables, like the scale of the available budget, how well VC4 does, and whether there will even be a sequel at all.

So far, Valkyria Chronicles has focused only on a portion of the battlefield, and the relationship between infantry and heavy weaponry. However, there are many other elements at play during a campaign. For example, air and naval power are crucial, while in the bigger picture, there are a lot of logistical factors like strategy and R&D that also influence the course of war. There are numerous conflicts beyond the boundaries of Europa, too.

We’ve still yet to explore so much of the world of Valkyria Chronicles, so I’m sure that no matter what else we introduce, it’s bound to be exciting.

Mikami: The future of the series depends on the latest title’s performance, but it would be great to take on the challenge of working with new PlayStation hardware.

As long as I don’t need to worry about any limitations, then it’d be fun to create a game with enough complexity in the mechanics that we could portray close-functioning combined arms combat, and a conflict on that scale.