The game is set to release on December 3 for PlayStation 4, Xbox Series, Xbox One, Nintendo Switch, PC (Epic, Ubisoft Store), and Ubisoft's UPLAY+ subscription service. It will also release for PlayStation 5. Players who purchase on Xbox One or PlayStation 4 will be able to upgrade their game to the next-gen versions at no additional cost.

Immortals Fenyx Rising will have a pre-order bonus, a Season Pass, and a Gold Edition. All pre-orders will come with an additional quest - 'A Tale of Fire and Lightening' - which will reward players with Fire Wings. The Gold Edition is priced at $99.99 and includes the Season Pass and additional DLC content. The contents of the Season Pass have not been shared.

In Immortals Fenyx Rising, players take control of winged demigod Fenyx on a quest to save the Greek pantheon of gods from the titan Typhon. In the open world comprised of seven unique regions, Fenyx will take on various creatures inspired by Greek mythology and find various upgrades to strengthen items like the Sword of Achilles, Bow of Odysseus, and Wings of Daidalos. The world will also be home to many puzzles for Fenyx to solve.

Fenyx will be upgradeable and customizable throughva wide variety of options. Equipment, health, stamina, and abilities can all be strengthened through various means, such as defeating enemies, solving puzzles, and opening chests around the overworld.

A trailer, overview, walkthrough, description, screenshots, art, and box arts can be found below.

Immortals Fenyx Rising brings grand mythological adventure to life. Play as Fenyx, a new, winged demigod, on a quest to save the Greek gods. 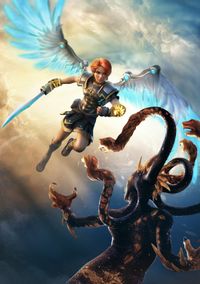