Kingdom Hearts: Melody of Memory will have a demo released next month

There's going to be a free downloadable demo for upcoming music and rhythm spin-off Kingdom Hearts: Melody of Memory, Square Enix has confirmed. It'll land in mid-October - but an exact date is yet to be confirmed.

The news of the downloadable demo was first revealed as part of a Kingdom Hearts: Melody of Memory live stream that was part of Tokyo Game Show Online 2020 - but Square Enix quickly followed up with a full international demo confirmation in a message from the Western Kingdom Hearts social media accounts.

The tweet confirms that the playable demo of the game will be available on all three platforms: PlayStation 4, Nintendo Switch and Xbox One.

The mid-October timing for the demo means those on the fence and series fans alike will have a chance to check out the game's musical rhythm action a little before its release on November 11 in Japan and November 13th in Western territories.

Melody of Memory was first announced back in June, and is a music-driven spin-off to the KH series in a similar vein to the Theatrhythm Final Fantasy and Dragon Quest games.

There's a typical Kingdom Hearts twist here from Tetsuya Nomura, however: this nostalgic journey back through the music, worlds and stories of Kingdom Hearts will contain some new series lore and story. It's not just a music spin-off, but in a sense it's the next Kingdom Hearts game, with Kairi seemingly taking a major role.

If you want to know more about how Melody of Memory plays, check out our recent story detailing the game's gameplay modes and operation. 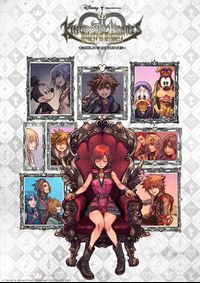