XSEED Games and Marvelous have released many new screenshots and details for Story of Seasons: Pioneers of Olive Town, highlighting character customization, the residents of Olive Town, pets, babies, rides, and more. This follows yesterday's new trailers introducing the Bachelors and Bachelorettes.

We've shared the information and images (over 100 in total) via XSEED Games and Marvelous below.

Story of Seasons: Pioneers of Olive Town is set to release for Nintendo Switch on February 25 in Japan, March 23 in North America, and March 26 in Europe & Australia.

Farmers can create a look of their own by visiting Olive Town’s beauty salon, changing up everything from their hairstyle to facial features or skin color. To accompany their new makeover, players can change their character's outfit to fit the season, bundling up for the winter or donning a breezy hat for long summer days.

Once players have established their home, they can start building a family. All players can raise pets such as dogs or cats, building a relationship of trust and even bringing them into Olive Town to participate in the annual Pet Derby. And getting to the derby is easier than ever with new transportation options including motorcycles and friendly wolf mounts! Players who find love in Olive Town can have their partner move in with them and eventually raise a child together.

Publisher XSEED Games has also released additional details about many of the characters residing in Olive Town:

[Editor's Note: Some of the characters have been previously introduced in Japanese press releases.] 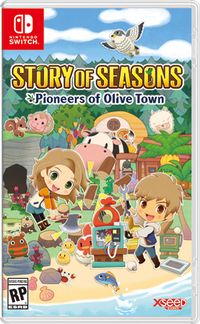