Nintendo has posted its financial results for the third quarter of the company's fiscal year ending March 31, 2021, and we've gotten some sales number updates for a handful of Nintendo's RPG offerings.

As usual, there's always quite a bit to sift through if you want information on all of Nintendo's catalog, but here at RPG Site we'll focus on the RPG (or related) data.

Most strikingly, Ring Fit Adventure has shipped 8.68 million units, up from 5.84 million units reported last quarter, meaning it sold nearly 3 million units within a period of three months. The combo of Pokemon Sword/Shield is also still moving units, now up to 20.35 million units (an increase from 19.02 million last quarter).

Lastly, Pokemon: Let's Go Pikachu/Eevee sneak into the sales list, having sold a million units in the current fiscal year. The duo is up to 13.00 million units sold (was at 12.49 million last quarter according to Nintendo's top-selling units page.)

Nintendo has once again upped its forecasts for sales and profits for the fiscal year, based on prospects. 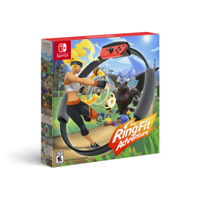