Publisher 1C Entertainment and developer Karaclan have announced VED, a hand-painted story-driven RPG. It is set to release in 2022 for PlayStation 4, Xbox One, Nintendo Switch, and PC (Steam).

An announcement teaser trailer, description, and screenshot set can be found below via 1C Entertainment.

VED is a story-driven RPG with a unique turn-based combat system and roguelite elements. Embark on a magical adventure set in a vivid world in stunning, hand-painted graphics. Explore mysterious islands, defeat monsters, master the magic of the Veds!

Kir comes to the city of Micropole in search of a new life, where he suddenly discovers the ability to teleport between two worlds. Another reality is completely different from the usual world: mysterious flying islands, strange creatures, dangerous monsters. And there is definitely something linking these two worlds.

Discover the truth and decide the fate of two worlds. Your power is magic of the Veds! Learn the ancient sorcery of the Veds to gain superiority over the enemy, and win! Explore mysterious islands where you will find blessings or curses that will stay with you until the end of the game. 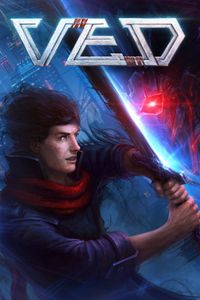