Dungeon Crawler Undernauts: Labyrinth of Yomi to release for PlayStation 4, Xbox One, Nintendo Switch, and PC in Fall 2021

During today's New Game Plus Expo stream, Aksys Games announced that Undernauts: Labyrinth of Yomi will release for PlayStation 4, Xbox One, Nintendo Switch, and PC (Steam) in Fall 2021. The first-person dungeon crawler previously released as Yomi wo Saku Hana in Japan last year.

Yomi was originally announced in May 2016 by the developers at Experience Inc., known for their dungeon crawler RPGs (affectionately called DRPGs by some) such as Demon Gaze and the upcoming Saviors of Sapphire Wings / Stranger of Sword City Revisited. The game was originally going to exhibit an action-based combat system, before being rebooted part-way through development.

The announcement trailer, description, and some box arts can be found below via Aksys Games. Pre-orders are now open at Aksys's storefront.

When a massive, mysterious structure suddenly rises from the ground, the government sends a team to investigate. You have been selected to join an elite group of underground explorers employed by Cassandra Company. Unfortunately, you are not the only one searching these caverns. Terrifying monsters lurk in the shadows. Dangerous criminals hunt for resources. Large numbers of people are missing.

The test of your survival skills begins now...

A new generation of explorers flock to the colossal superstructure, Yomi, in hopes of striking the "mother lode".

Cut through the walls and create your own path as you battle for your life in the depths of Yomi.

The ultimate test for survival is found in the labyrinth. Terrifying monsters lurk in the shadows. Criminals with mysterious powers are out to thwart your efforts.

Can you be victorious and rise above the shadows? 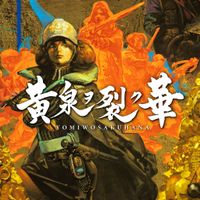