Signs of the Sojourner launches for PlayStation 4, Xbox One, and Nintendo Switch later this month

Publisher Digerati and developer Echodog Games has announced that Signs of the Sojourner will launch for consoles later this month. The narrative card game will be available as a digital release on March 17 for PlayStation 4, March 18 for Nintendo Switch, and March 19 for Xbox One.

We were very positive on Signs of the Sojourner when Dani reviewed the PC version in May 2020, giving a 9/10.

The console announcement trailer can be found below, alongside a description of the game.

Signs of the Sojourner is a narrative card game about connecting with people. Your deck is your character, reflecting your experiences and shaping your relationships.

You take over your mother's store after her death, traveling to diverse locations to acquire goods for the shop. Along the way, you'll encounter optimistic stories, compassionate characters, and delightful surprises in a world where climate change has made life hard.

Key Features
• Forge new friendships, rivalries, and connections through card game conversations
• Play cards to match the tone and perspective of your partner or try to sell your own point of view
• Make difficult choices – The consequences shape your deck and every conversation that follows
• Meet unforgettable characters and grow alongside them
• Explore the world, but also explore what it means to return home
• Find rare and useful goods to aid your town
• Many possible endings

Signs of the Sojourner 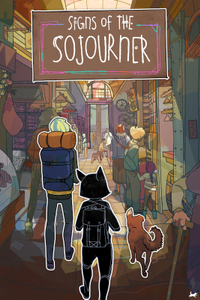